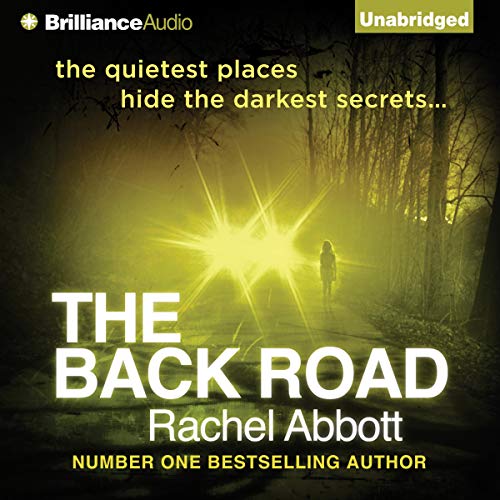 In a quiet country village, secrets abound. When young Abbie Campbell is knocked over and left for dead on the back road of the village of Little Melham, waves of shock ripple through the small community, threatening to expose long-kept secrets. For Ellie Saunders, the truth about that night puts both her marriage and the safety of her children in jeopardy - she has to protect her family, no matter what the cost. Her neighbor, former detective Tom Douglas, has escaped to Little Melham in search of a quiet life, but finds himself drawn into the web of deceit as his every instinct tells him that what happened to Abbie was far more than a tragic accident.

In this gripping novel, the peaceful English countryside belies the horrible truths that lurk beneath the trimmed hedgerows, behind the closed doors of smart sitting rooms, and within unspoken conversations.

When I first started listening to The Back Road, I wasn't at all sure I was going to like it. It seemed as though the entire book was going to be a dark tale of abuse. But it wasn't that at all. The sisters, Ellie and Leo, who share the same father, but different mothers, and their different paths growing up is a big part of the story. The small town, where everybody knows their neighbor, (or thinks they do) is very interesting . . . and it kept me totally intrigued as the "skeletons" kept coming out of the closets. The book is a bit long, but after the first hour, I found myself fully engaged and vested in the characters. Some are prickly, some disgusting, some standoffish, some kind, some misunderstood, and some I wanted to wrap my arms around and hug. This is a well written, well thought out book, and I never would have guessed the ending. Well worth the wait!

This book was okay, but I felt there was an awful lot of it that read like a soap opera, where if only the characters would talk to each other, all of the misunderstandings would be cleared up.

This kind of plotting annoys me the most when it is used excessively, and I thought that was the case here. Tom Douglas, who has left the police force and moved to Cheshire in this second series entry, is really not involved much in this one until the last few hours. I enjoyed the part that he was in, however.

I kept waiting for something to happen here, and when I get to the point that I am not involved in the story enough that this feeling of waiting becomes a conscious thought, the writer has pretty much lost me.

Narrator did a creditable job with what she had to work with.

This is the last time I read a Rachel Abbott book.

Her books are too drawn out. Far too many names to remember. I listened to the audio book version and sat there most of the time thinking "who was that character and what scene was she in?" this is my 3rd book of Rachel's that I've listened to and although the book description is thriller mystery...the plot and storyline is subpar and lacking. Good luck to her maybe in the far future I'll give her another go.

The Back Road is better than my rating indicates. After listening to Only the Innocent , the first book in the DCI Tom Douglas series, I expected something different. My first issue with this novel is that protagonist DCI Tom Douglas is an incidental minor character. My second and major issue is that much of The Back Road is fill-in dialog that is used only to fill pages so the novel will be longer. The story is excellent, but is poorly executed by the author.

Great book and WHAT A NARRATOR!

Where does The Back Road rank among all the audiobooks you’ve listened to so far?

I will definately suggest that my friends read this book. I thought that it started out a little slow, but as I listened I realized how important it was for character development. The author did a great job setting up the story.I will read her next book.

What other book might you compare The Back Road to and why?

Hard question. The review talks about Gone Girl. I have read Gone Girl and really liked it. The two books have similarities but not the same. I think her writing is a lot like Hitchcock in the way she set up the mystery. She introduces the characters at a dinner party with conversations going in all directions. The narrator was excellent with all the different voices!

Have you listened to any of Sue Pitkin’s other performances before? How does this one compare?

I do not think so but (as people say) I could listen to her read the phone book. She really made this book entertaining and brought the characters to life.

Absolutely! The book was too long to do so. I will read this book again some day.

Well worth a credit or purchase! If you like mysteries plan to read this author!

A good story with several aspects going on. It was entertaining but not riveting. I found the excess length detracted from what should have been enjoyment. This made it hard to continue at times.

I am now firmly a fan ! I dare say this is an incredibly good read!
I shall buy each one of her books and not sleep until finished!
Very fine narration and strong storyline .highly recommend you do not miss this !

I struggled through this one...

I really did not enjoy this book. I was so bored that sometimes it kept putting me to sleep. There were interesting periods here and there, but this story dully dragged out in my opinion. There were too many characters, perhaps to add to the whodunit shock value. Seemed to be over the top and pointless. At times I had trouble discerning who the present character was because the narrator's voice sounded pretty much the same for them all. I was disappointed with this one and couldn't wait for it to be over.

I couldn't stop listening. Mystery, crime and a touch of romance makes this novel a real treat. It isn't at all predictable but when you find out what happens next, it all makes sense. I definitely will download this author's next novel as soon as I can.

Long, but great dialogue and drama

What did you love best about The Back Road?

What was one of the most memorable moments of The Back Road?

The dinner party. I absolutely loved this scene and thought about it often while listening to the rest of the book. Several characters are introduced in early chapters, and they all attend the same dinner party where much happened via conversation. The author did a great job making me feel like a fly on the wall observing all of the verbal action that was unfolding.

Which character – as performed by Sue Pitkin – was your favorite?

Probably Leo for her emotional strength, even though it was really just a facade hiding a vulnerable interior.

Everyone has a secret.

Although the book's summary mentions a girl being hit by a car, there were times during the book when this seemed like a secondary story. Some of the people in the book were involved in questionable activities, and much of the book was focused on that and less on the accident. There were times when listening to the book that I completely forgot there had been an accident. The author does tie everything together in later chapters, however, and I didn't feel there were any parts of the story that were left dangling without sufficient explanations.What would I change? I'd make it shorter as 14 hours for an audiobook is a long time, without removing any of the drama. I'd also probably have removed a few of the story lines as it was confusing at times trying to associate different events with different people. There was a lot happening in this book, both in the present and in the past (mostly via conversations whereby people talked about events that had occurred previously), and some of it likely could have been removed without affecting the story overall. I'd recommend the book or the audiobook (the narrator was splendid) for anyone who likes drama or suspense, and especially for anyone who likes books which focus more on dialogue and less on action or description.