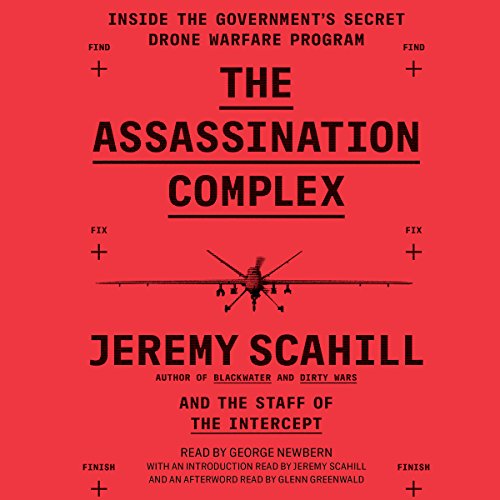 Major revelations about the US government's drone program - best-selling author Jeremy Scahill and his colleagues at the investigative website The Intercept expose stunning new details about America's secret assassination policy.

When the US government discusses drone strikes publicly, it offers assurances that such operations are a more precise alternative to troops on the ground and are authorized only when an "imminent" threat is present and there is "near certainty" that the intended target will be killed. The implicit message on drone strikes from the Obama administration has been trust, but don't verify.

The online magazine The Intercept exploded this secrecy when it obtained a cache of secret slides that provide a window into the inner workings of the US military's kill/capture operations in Afghanistan, Yemen, and Somalia. Whether through the use of drones, night raids, or new platforms yet to be employed, these documents show assassination to be central to US counterterrorism policy.

The classified documents reveal that Washington's 14-year targeted killing campaign suffers from an overreliance on flawed signals intelligence, an apparently incalculable civilian toll, and an inability to extract potentially valuable intelligence from terror suspects. This campaign, carried out by two presidents through four presidential terms, has been deliberately obscured from the public and insulated from democratic debate. The Assassination Complex allows us to understand at last the circumstances under which the US government grants itself the right to sentence individuals to death without the established checks and balances of arrest, trial, and appeal.

a must read/listen for if more peek l people knew the the truth this scum leading this country would all be in jail. Makes me sick to be American with leaders like this.

Disclosing what everyone knows but does not talk about

It's a well written overview of the secret assasination programs ran by western governments... On first glimpse.
However, it is much more than that:
When you actually sit down and think about it -- which, the book makes a good job of; it is not so much about pointing the finger at administrations and playing the blame game; rather, It's more about "How do you adapt to the new definition of terror, in this era?l"
+ What are the correct definitions of "terror" and "terrorists"? How do you distinguish the good and bad?
+ Once you establish the good and bad, which methodologies should be used to fight?

It's clear that the 20th century definitions of liberty, justice and democracy no longer work in this century, with the current global dynamics.
Does it make sense trying to pursue these "ideals", all the while constantly chasing loopholes to tackle the new era's dynamics?
It amy sound like an oversimplification; however, it is rather simple:
What we are seeing is technology advancing much quicker than the law.
New technology emerges, gets utilised, law always lags behind -- valid for all areas, including warfare.
Once "packaging" is improved, everyone gets used to it, objections cease to exist.
We just need more time.
All whistleblowers do is to draw attention to this process.
Once the lawnakers catch you, blown whistles will be rendered obsolote.

A chilling look at what our country has become since 9/11 - and how much further into the sewer of totalitarianism we are now likely to go.

After reading this truly enlightening book, its blatantly apparent why we are losing our longest war, our country's assets and what few allies we had in the world. The President has been disingenuous with us and the Military Industrial Complex is leading us down the primrose path.

Somewhat repetitive. Could have been shorter

Chapters seemed to rehash the same material. Delivery was good, but overall the middle drifted before an ending that deserves more examination

Biased overview of US military use of drones

Fairly biased but lots of good information. The afterword was very opinionated but the message is conveyed.

Sensationalism at its best.

Plenty of baseless conjecture from uncleared covloans. The authors are playing to a shortsighted fan base here. It's sad they cannot be set straight, but that's the reality of modern warfare.

It's a must-read for any person concerned with knowing the truth about American interventionism abroad.

America, this is the cancer on your soul

Americans and others who wish to be informed on the abject failure of the war on terror and US Foreign Policy, extra judicial murder abroad, targeted assassinations and unlawful violations of 4th Amendment rights domestically, the book gives all the details on th unsustainable way the American intelligence apparatus is harming us all.

a good introduction to the drone program

Interesting topic, no recommendations from me

While I'm absolutely opposed to killing and terrorising people randomly with drones flying constantly over the head, I'm a little bit disapppinted by this audiobook. It certainly contains a lot of examples and arguments for how terrible these weapons are, and how morally wrong it is to kill people based on the assumption that they are too dangerous for a particular state (i.e. the USA) without any trial and a lot of potential for errors.

However, I've lacked a clear structure in this book. It seems to jump from here and there, repeats itself from time to time and is over before you know what it is about. Wouldn't recommend this to my friends.

This book is an eye-opener to the world of covert warfare and extrajudicial killings. Whether you are an American or not, read this book to understand what the US does - not only to terrorists (with whom I have little sympathy in general) - but to the ordinary people of these countries where drone strikes are daily business. Learn about the success-rates of drone-warfare and the vested interests of those begind this machine. Read it to get a glimpse of how surveillance technology has developed from an instrument of war on terrorism to items used by police to spy on their own civillians. One has not to be too creative to see where this whole thing is going! Scare-mongering? Read the book and draw your own conclusions but READ IT YOU DEFINITELY SHOULD!