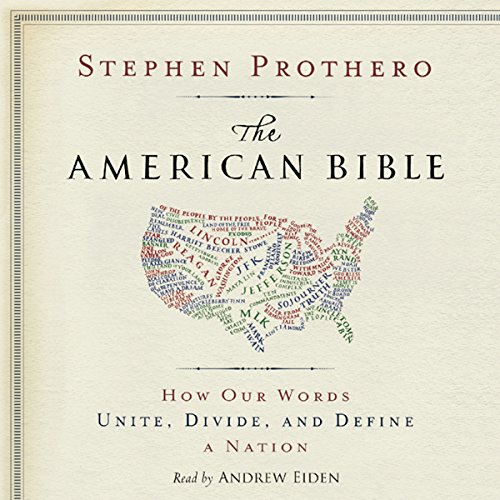 Since Thomas Jefferson first recorded those self-evident truths in the Declaration of Independence, America has been a nation that has unfolded as much on the page and the podium as on battlefields or in statehouses. Here Stephen Prothero reveals which texts continue to generate controversy and drive debate. He then puts these voices into conversation, tracing how prominent leaders and thinkers of one generation have commented upon the core texts of another, and invites listeners to join in.

Few can question that the Constitution is part of our shared cultural lexicon, that the Supreme Court's Roe v. Wade decision still impacts lives, or that "The Star-Spangled Banner" informs our national identity. But Prothero also considers lesser known texts that have sparked our war of words, including Thomas Paine's Common Sense and Maya Lin's Vietnam Veterans Memorial.

In The American Bible, Christopher Hitchens weighs in on Huck Finn, and Sarah Palin comments on Martin Luther King Jr. From the speeches of Presidents Lincoln, Kennedy, and Reagan to the novels of Harriet Beecher Stowe and Ayn Rand, Prothero takes the listener into the heart of America's culture wars. These "scriptures" provide the words that continue to unite, divide, and define Americans today.

This was one of those instances that anyone who buys audio books has had from time to time where the book didn't turn out to be anything like what I expected. I thought the book was going to be about how America's religious beliefs came to be what they are today. In actuality, the phrase "American Bible" refers to a collection of the famous works (speeches, books, judicial rulings, articles of government, etc) that make up the American canon so to speak. This isn't a typical non-fiction work. Prothero has come up with a number of the important works in American history and they are reproduced in the book either in their entirety or through excerpts. Prothero gives a brief introduction to each work and why it is important, and following the reading of that work, he includes a number of references that have been made concerning that work over the years. It took a while for me to get into it but after a while I started to find it enjoyable and interesting. I thought Prothero's device of using a book from the bible to categorize each group of writings was very clever, although at times there didn't seem to be an obvious reason why he listed a certain work under a particular bible book. The narrator is blah.