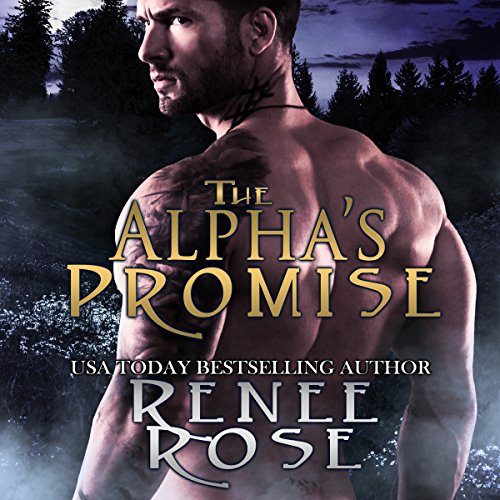 A dominant alpha. A tempting human. An impossible attraction.

After one loser boyfriend too many, Melissa Bell swore she was done with bad boys, but when her ex puts her life in danger it is a buff, tattooed, dirty-talking alpha shifter who shows up to save her. More disturbing still, her rescuer makes it clear that he regards Melissa's safety as his personal responsibly, and defying his instructions soon earns her an embarrassing spanking. Though she should be furious, her body's reaction to the tough, handsome wolf's stern dominance demands more.

It doesn't take long for Cody to wish he'd never made an alpha's promise to protect Melissa, yet for some reason he can barely control himself around her. His inner wolf craves the beautiful human in spite of her snobbish attitude and constant sass, and when she is writhing over his knee, it is all he can do not to mark her and mate her right then and there.

Each moment he spends with the alluring, feisty girl only increases his hunger for her, but Cody promised himself long ago that he would never take a human as his mate. Will his pride push Melissa away forever, just when he realizes he can't live without her?

Publisher's note: The Alpha's Promise is a standalone book set in the same world as The Alpha's Hunger. It includes spankings and sexual scenes. If such material offends you, please don't buy this book.

I got this book in the afternoon and ended up finishing it in one night.
It's seriously HOT. I've been through my fair share of erotic romance novels with fantasy themes but none have had the amount of character chemistry that this one had. I hadn't read the first book but saw that it was good as a stand-alone so I figured it was okay to get and it was so worth it. You really don't need to read the first book at all. The world is simple and confidently established enough to be believable to the reader. Although sometimes the bickering was a bit dramatic as a way to push the story along the characters personalities are believable.
The narrator was one I've heard before and the reason I found the book in the first place. Her style of narration is PERFECTION and her character dialog is distinct yet not pushing it. She's not reading like you would a child but TELLING the story. She gives certain tones and dialects that sound more natural than a lot of narrators I've listened to. Twas a pleasure.

I liked Cody. However Mellisa was childish, irritating and a little dumb. She kept putting herself in harms way and it was frustrating to listen to. Why couldn’t she learn from her mistakes?!

How to fight attraction 101

He was asked to rescue and prevent harm coming to another Alpha's ( Ben Stone) sister in law (Melissa), when she had found her house trashed and three men walked in, whilst she hid upstairs.
He rescued her and that started a love- hate relationship, with all resistance at attempts at control, by the male alpha wolf shifter (Cody) thwarted by the red headed female human.
Yes the attraction between these two sizzles off the pages. The disciplinary scenes were super heated, they were so sexually stressed.
I loved the reader's of the books audio rendition and her interpretation of the vocal sounds associated with each individual character.

The story revolves around a female 1/4 wolf that is protected by a Alpha 'Bad Boy' of sorts. It is almost a Pride and Prejudice themed story. I loved the narrator, she did a excellent job, you could hear her smile in parts and the tempo was good. The story was well written, I would have liked more after story though. It seemed to be hours and hours of buildup and 20 minutes of wrap up. I would have liked to hear more on if he is still going to stay Alpha (although maybe that's in a later book). I think it would have been better if she discovered she really was more wolf though (not a spoiler because it's brought up throughout the story). But I still wished it so he could remain Alpha. But I will just have to listen to book 3.

This narrator was irritating. Sometimes her inflections were in the wrong place. She read to slow for effect but it only sounded over exaggerating. The main female character was an embecil. She was insulted, spanked molested and almost raped but her p**sy clinched for this alpha male for no reason all within a few hours of knowing him. I could not suspend belief enough to finish this.

I loved it, it totally kept my attention till the very end !
It keeps you wanting more!

please - the heroine in the story behaves rudely, stupidly over and over again and is just unpleasant.

it's a good read.

I love this book! It kept me on a roller coaster of emotions. I highly recommend this book.

I received a copy of this audiobook in an exchange for an honest review. The story involves shifter alpha male and a human female. I didn’t like the character of Melissa. I thought she was very rude and horrible to the shifter who was helping protect her from danger. But the story is a quick easy listen if you’re looking for something that’s not too long. I also didn’t love the narrator for this book, which is the same narrator as from the first book.