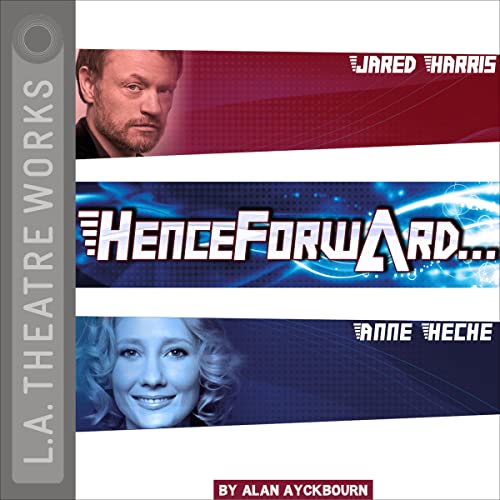 Six plays from the Olivier, Tony, and Moliere Award-winning playwright Alan Ayckbourn: The legendary The Norman Conquests trilogy; as well as a brand new recording of his play Henceforward… starring Mad Men's Jarred Harris alongside Anne Heche; Just Between Ourselves starring Alfred Molina; and a remastering of L.A. Theatre Works’ recording of Man of the Moment.

Ayckbourn’s celebrated triology The Norman Conquests includes three hilarious and poignant plays depicting the same six characters in one house over one weekend, namely Norman and his romantic follies.

"Table Manners" (The Norman Conquests, part 1): England’s famous seducer of other men’s wives lays siege to his sister-in-law in the first “battle”. A middle-class family trying to have a pleasant country weekend is no match for Norman, who horrifies everyone by doing exactly as he likes.

"Living Together" (The Norman Conquests, part 2): In the second “battle” Norman gets drunk on homemade wine - and all hell breaks loose. He unleashes his merry brand of manipulative charm on the hapless guests, and even his most formidable opponents go down in defeat on the drawing-room rug.

"Round and Round the Garden" (The Norman Conquests, part 3): In the third "battle", the setting is Mother’s overgrown English garden, where something more troublesome than brambles lurks among the roses. Havoc ensues as this satirical masterpiece makes its way to a hilarious conclusion. Cast: Rosalind Ayres as Sarah, Kenneth Danziger as Reg, Martin Jarvis as Norman, Jane Leeves as Annie, Christopher Neame as Tom, and Carolyn Seymour as Ruth. Directed by Dennis Erdman.

Just Between Ourselves, starring Alfred Molina - this is the first of Ayckbourn’s darkly comic masterpieces and involves a relentlessly cheerful handyman in a disastrously fractured marriage. Two couples develop an unlikely friendship in this painfully funny portrait of British suburban life. Cast: Gia Carides as Pam, Kenneth Danziger as Dennis, Judy Geeson as Vera, Miriam Margolyes as Marjorie, and Alfred Molina as Neil. Directed by Waris Hussein.

Writers block, divorce, and a female robot - these are the ingredients for the hilarious Henceforward.... Alan Ayckbourn writes about the not so distant future of what lengths a man will go to be inspired again, gain the love of his daughter, and redress the pain of his past. Cast: Jared Harris as Jerome, Anne Heche as Nan (act I) and Corrina, Jack Davenport as Mervyn, Paula Jane Newman as Geain, Moira Quirk as Zoe and Nan (act II), and Darren Richardson as Lupus. Directed by Martin Jarvis.

In the comedy Man of the Moment, the price of accidental fame is hashed out, inspired by the Great Train Robbers, such as Edward and Ronnie Biggs. It's about a famous bank robber and the clerk who foiled his biggest heist. Ayckbourn’s 1988 play anticipates the popularity - and absurdity - of reality TV. Cast: Rosalind Ayres as Jill Rillington, Jane Carr as Trudy Parks, Kenneth Danziger as Douglas Beechey, Martin Jarvis as Vic Parks, Ian Oglivy as Kenny Collins, and Yeardley Smith as Sharon Giffin. Directed by Robert Robinson.

I heard Alan Ayckbourn was one of the play writes of the century. Maybe I am just an uncultured swine, but I found them to be horrendous. LA theater works performance was excellent as usual. I got no satisfaction or enjoyment from any of the play this collection.