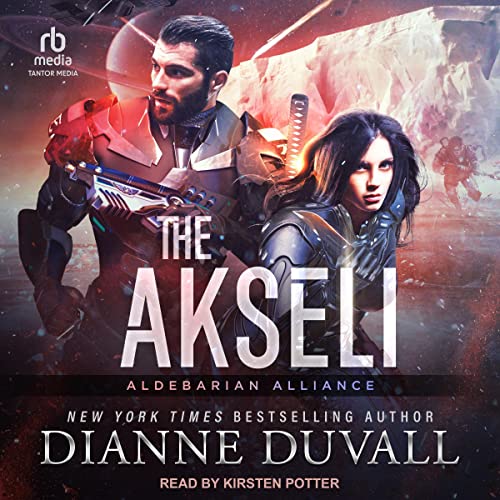 Simone has hunted and slain psychotic vampires for hundreds of years and desperately needs a change. When the leader of the Immortal Guardians offers her an opportunity to guard ten mortal women who are venturing to another planet, she dives right in and finds traveling into space just as exciting as she'd hoped . . . until an enemy attacks. Simone saves everyone she can before she's thrust into an escape pod and the ship explodes.

Despite his fierce reputation and propensity for violating the law, Janwar has formed a friendship with strait-laced Prince Taelon of Lasara. When the prince's ship is destroyed, Janwar joins the Aldebarian Alliance-wide search and rescue mission and soon locates the Gathendien ship that launched the attack. Much to his surprise, someone else has reached the ship first: one of the very Earth women he hoped to rescue.

Fascinatingly fierce, Simone bands together with Janwar and his crew to search for her missing friends. The friendship that grows between Janwar and Simone deepens into love. But the enemy warriors they face boast more weapons in their arsenal than the alliance knows. Can Janwar, Simone, and such a small crew vanquish them?

I didn't love it

I love Dianne Duvall and her IG series so I eagerly devoured this new one. However, this series seems to be hit and miss with the only standout being The Segonian, which was awesome! The others and this one book in particular was disappointing. It book started off strong with great characters only to fizzle out have way through. It became really wordy in unnecessary places like the author was trying to meet a word count quota. Then it would simply gloss over parts where more detail could have been used to flesh out side characters and add depth. In short, I didn't really like. I don't think I will follow this series and will check back with this author if she ever returns to the IG world on Earth.

Dianna has done it again!! I couldn't stop listening to this book and I'm so excited to know that another one will be coming soon by the way this one ended.

I have been counting the days. The wait was worth it. Another exciting adventure in space, where the good guys kick Gathendian tail***.

Dianne Duvall has done it again. God I wish someone would let her make her books movies. She has such a wonderful mind.

This book the Akseli is just another fantastic adventures into a world that Dianne Duvall has created.
I have listened to all her books so many times. I love how I can just listen and be taken right into the story.
⚜Kirsten Potter is one of the most gifted narrators, she does so many different voices. She brings so many characters to life, each in a individual way. It is like each character is done by a different person.

Do yourself a favor, take a chance if you haven't already listened to or read anything by Dianne Duvall and get this book, then listen to her others, if you like a little bit of tasteful sexy, and fun adventure, with a little bit of suspense, you cant go wrong. So many times I burst out in laughter, listening to the book is so wonderful because you just get transported, you can see it happening, such a gifted author and she has the perfect narrator for all her book.

I can only say thank you and I love the story.

I love a kickass heroine

Simone fighting a whole crew of aliens 👽 by herself with just her kitana and the fight in the arena against the dothorian was hilarious.

I Dreaking Love this Series

I pre-ordered this book because I love IG and Dianne Duvall. I held off listening to it until now because as soon as its over I want the next one IMMEDIATELY. So, I stall reading the latest one, so I won't feel the let down when it's over and the wait for the next book begins. This one was so good that I'm not even sad that it ended, and I'll have to wait until the next one. I loved Janwar and Simone. Simone is an IG and 700 years old, but I wish she would remember hard to kill doesn't mean she can't die. Thankfully, Janwar will be there to remind her now. No spoilers but they definitely have a slow burn thing going on. Dianne introduces us to the crew, and you'll fall in love with these band of pirates as much as Simone does, especially "T". Cova will make your heartache, but I gleam some happiness in his future.

Of course, I listened to it all the way through until 2:30 am because its Dianne Duvall. I do wish we could hear more of Seth's thoughts on what has happened to the gifted ones he sent on this mission. I hope that will come in the next original IG book. I really loved this story, and I can't wait to see where it goes next. Hopefully, taking on Janwar's home planet will be on the schedule because it's long overdue to take that government down.

Kirsten potter is such a fabulous reader her voice & inflection are spot on with the dialogue IMO
T is fab
The. Crew is fab
Jan war & Simone are hilarious
I’m trying not to give spoilers just suffice it to say even a gathebdian cyborg can’t take out the dominator lol enjoy!

Just saw this latest in series I'd lost track of!

Great addition to this branch off series! Loving the sci-fi bent! Taking thevGuardian heroines into the galaxy freshens the original series by focusing and developing lead female badass characters. Simone is a pisser! Girl Power! When will the next one be out? I'm lining up for it now!

I love this whole series of immortal guardians. I have every one. I am not fond of explicit love scenes but there are a few. If I could have the series without them I would buy them. The story has adventure, great good and bad aliens. There are some worries , comprising and ingenuity in fighting the adversary. We need to solve our problems in our own lives with the help of our wonderful friends and family. A very wonderful escape.

Dianne Duvall never disappoints. This is a must read! I have all of her books, totally recommend this one!