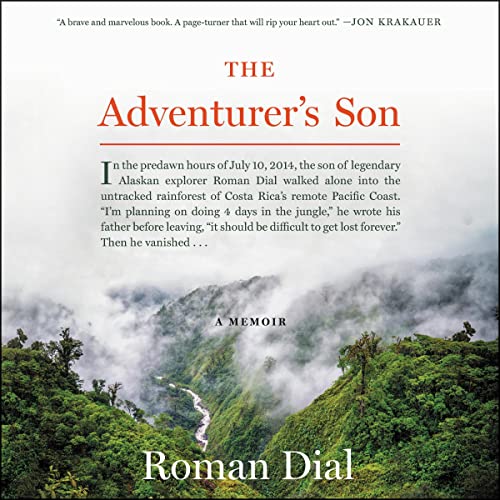 "A brave and marvelous book. A page-turner that will rip your heart out." (Jon Krakauer)

In the tradition of Into the Wild comes an instant classic of outdoor literature, a riveting work of uncommon depth. I’m planning on doing four days in the jungle.... It should be difficult to get lost forever: These were the haunting last words legendary adventurer Roman Dial received from his son, before the 27-year old disappeared into the jungles of Costa Rica. This is Dial's intensely gripping and deeply moving account of his two-year quest to unravel the mystery of his son's fate.

In the predawn hours of July 10, 2014, 27-year-old Cody Roman Dial, the son of preeminent Alaskan scientist and National Geographic Explorer Roman Dial, walked alone into Corcovado National Park, an untracked rainforest along Costa Rica’s remote Pacific Coast that shelters miners, poachers, and drug smugglers. He carried a light backpack and machete. Before he left, he emailed his father: "I am not sure how long it will take me, but I’m planning on doing 4 days in the jungle and a day to walk out. I’ll be bounded by a trail to the west and the coast everywhere else, so it should be difficult to get lost forever."

They were the last words Dial received from his son.

The Adventurer’s Son recreates the author’s two-year quest to learn the truth about his child’s disappearance. Immediately after Cody Roman’s planned departure date passed without a word from him, Dial set off for Costa Rica. As he trekked through the dense jungle, interviewing locals and searching for clues - the authorities suspected murder - the desperate father was forced to confront the deepest questions about his own life. Roman had raised his son to be fearless, to seek out adventure amid earth’s wildest places. Was he ultimately responsible for his son’s fate?

A harrowing story of drama, adventure, and a father’s love for his son, set in the most beautiful and dangerous reaches of the planet, The Adventurer’s Son is a mystery, the memoir of a father and his son, and an unforgettable story of love and profound loss.

Drawn out attempt to avoid quilt.

The book has two main parts: family back story and search for his son. Both include way too many irrelevant stories. The title is misleading as well, as the "Son" is mentioned in flashes. The book reads more about how much the father thinks of himself. It is hard to finish this book and not draw a conclusion about the father's selfish aggrandizement. Everything is about him not the son. The last email sent by the son he didnt even read. This seemed like the conciousness clearing attempt of a narcissist. As the book drags on every issue is the fault of someone else. If the death was as concluded then that's sad and can happened to anyone. However there seems to be a delusion of the father that going on the trip was a good idea. Most of the names mentioned on the sons trip a common names set in the Narcos, where horrible things happen daily. I feel the author thinks adventure and stupidity must coincide. The book reads as on big asking for it, with no concept of self preservation.

I’ve never reviewed a book . But this one seemed different. I related , I’m 61 my sons 34 and 31 . In November I did a whitewater trip with my older son . The water was up and we got so much more than expected. This book took me on such adventures and made me feel like I know the family . It stirred my emotions ! Upon finishing it I for once didn’t go looking for my next listen . Thank you for sharing your and your sons story .

So slow, so frequently boring, so much repetition to pad out the story. Not even a hint of trying to build suspense , everything a foregone conclusion. I should have cut to the last few chapters hours before I actually finished. The father, in hopes of instilling confidence in his sons adventure some nature, made many terrible decisions that any parent could easily see in retrospect. The sun himself, with the immortality inherent in youth, made even more terrible decisions, braving the remotest jungle possible by himself. Scuba divers always have a “ buddy”. What happened to him was nobody’s fault but his own. The narrator compounded the problems of the book by reading in a virtually emotionless, plodding way. Not a storyteller at all.

Thank you to the author

I first heard of this book from The MeatEater podcast and knew it was for me. It must have been incredibly difficult to write, and even more difficult to share with the world. People handle grief in many different ways and I understand why the author did all that he did. As a search and rescue volunteer, outdoorsman, and the father of a young son, I connected with this on many levels. I want to thank the author for sharing his story and that of his son.

Simply a beautiful book. The Audible version of a page-turner with an amazing story, tremendous insight, and gorgeous writing. A gift to the listener and an honor to Cody Roman Dial.

Not satisfying at all...

I felt like I've wasted my time with this one. It was a slog to get through. And the end was not satisfying at all. This could have been an hour long podcast.

And so well-written. What guts it takes to pour your heart out and address every parent’s worst nightmares head on. Bravo!

I first heard Roman’s story on a podcast a few weeks ago. As I listened to this artfully written book it was hard knowing what was coming. When Roman was trying to get Roman to stand up as a toddler I could not help but have tears running down my face. I can not imagine how hard it was for Roman to put these words to paper. I will say Roman honored his son and his legacy.

From a fathers description of events. A walk through the life a son and the emotions of the father that misses him. Very good description of sights and sounds and emotions.

This was an important story for a father to tell about both his son’s life & the search for him
when he vanished into the Costa Rican wilderness, but it never really engaged me. It was deeply personal, yet the long family history and stories of shared family trips didn’t teach me anything new or open my eyes to something I’d never thought of. I felt as though I was reading a journal by someone I didn’t know, peopled with names I’d never remember, about people that I sympathized with yet didn’t connect with. I listened while out on long walks and frequently realized I’d completely drifted away from the narrative.