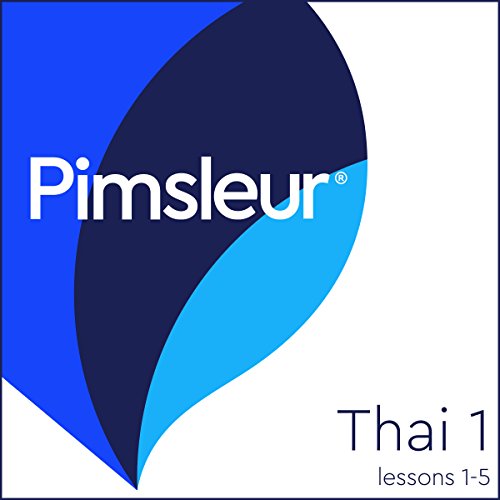 The Pimsleur® Method: the easiest, fastest way to learn a new language. Completely portable, easily downloadable, and lots of fun. You’ll be speaking and understanding in no time flat! Thai Phase 1, Units 1-5 build on material taught in prior units. Each lesson provides 30 minutes of spoken language practice, with an introductory conversation, and new vocabulary and structures. Detailed instructions enable you to understand and participate in the conversation. Each lesson contains practice for vocabulary introduced in previous lessons. The emphasis is on pronunciation and comprehension, and on learning to speak Thai.

they omit words when repeating phrases

The English guy speaks too slow and wastes time saying a bunch of junk that doesn't at all help learn the phrases, then when the native speakers are supposed to repeat the phrases, they often never repeat it, or change it, omit words, or skip around the 2nd time through so you never can see if you said it right. Most of the time they just repeat the easiest words twice, like maybe the first and last sounds from the entire sentence, or 2 random words in the middle" completely ignoring all the hard new words and sounds, then moving on to spend several minutes repeating the easy stuff. Even playing it at 0.5x, the slowest it will go, they still talk too fast to hear each syllable clearly. It's also obvious, between the free lesson 2 and paid lesson 2 that they tried twice to get it better, but it still isn't right, making it very confusing. I could typically do as many as 6 tracks in a day for other courses like Tagalog, Mandarin, Russian, Spanish, Italian, and French but these Thai lessons are totally screwed up, took 2 days just to get part of track 2 & 3 partially sorted out. Also, when they teach you how a woman should say a word, immediately, they should tell you how the man should say that 1 word, before wasting a couple minutes on the rest of the phrase, but instead, they make you wait, wondering how to say it after repeating a bunch of words you already learned, rather than telling you the 2 ways back to back so that you can immediately hear the difference. They waste efforts saying things like "raise the tone of your voice for question" which is pretty much basic for all languages and doesn't require any necessary explanation, could have just been put on the toss away track 1. In addition, they waste a lot of minutes say useless junk like "imagine you are sitting on bus and want to talk to a someone in Thai" (well duh, these are Thai lessons, that is the reason we're here) also including "this is track 1 and this is audible and this is our company your listening too and this is who produced it" blah blah but that is typical for all of their lessons, so I can't complain too much about that, as it was to be expected. If you are listening to this to try and take long a vacation to Thailand, it will be way more difficult than you thought, be prepared to spend months at just the basics in lesson 1.

When I first started learning Thai I thought I would never get it down, but this book is so helpful and teaches you conversations rather than just words and phrases. I spoke with a Thai couple and they were so impressed by my skills! Onto book 2!!

Was the best program I could find and it really works. Will buy the following lessons too.

the sound quality is like listening to a cd with lots of scatches. not very helpful to learn a language like thai...