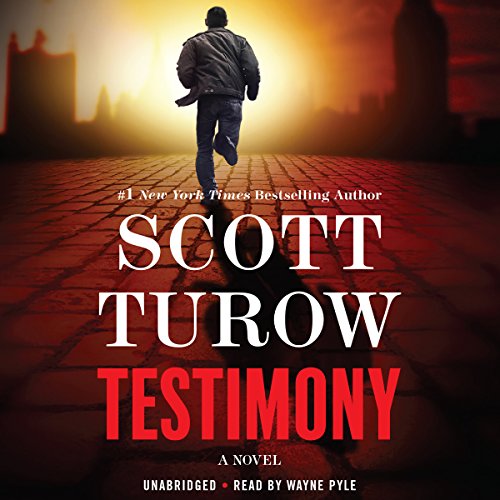 Scott Turow, number-one New York Times best-selling author and "one of the major writers in America" (NPR), returns with a gripping legal thriller about an American prosecutor's investigation of a refugee camp's mystifying disappearance.

At the age of 50, former prosecutor Bill ten Boom has walked out on everything he thought was important to him: his law career, his wife, Kindle County, even his country. Still, when he is tapped by the International Criminal Court - an organization charged with prosecuting crimes against humanity - he feels drawn to what will become the most elusive case of his career. Over 10 years ago, in the apocalyptic chaos following the Bosnian war, an entire Roma refugee camp vanished. Now, for the first time, a witness has stepped forward: Ferko Rincic claims that armed men marched the camp's Gypsy residents to a cave in the middle of the night - and then with a hand grenade set off an avalanche, burying 400 people alive. Only Ferko survived.

Boom's task is to examine Ferko's claims and determine who might have massacred the Roma. His investigation takes him from the International Criminal Court's base in Holland to the cities and villages of Bosnia and secret meetings in Washington, DC, as Boom sorts through a host of suspects, ranging from Serb paramilitaries to organized crime gangs to the US government itself, while also maneuvering among the alliances and treacheries of those connected to the case: Layton Merriwell, a disgraced US major general desperate to salvage his reputation; Sergeant Major Atilla Doby, a vital cog in American military operations near the camp at the time of the Roma's disappearance; Laza Kajevic, the brutal former leader of the Bosnian Serbs; Esma Czarni, Ferko's alluring barrister; and, of course, Ferko himself, on whose testimony the entire case rests - and who may know more than he's telling.

A master of the legal thriller, Scott Turow has returned with his most irresistibly confounding and satisfying novel yet.

Full of insights to human failings and achievement

With the attention of our nation more focused on the impacts of our past actions and the consequences of future options, "Testimony" shares a modern parable on how we should understand how history will judge our choices.

As always I found everything here I was looking for, which probably means I missed a lot. Turow's rigorous legal perspective to a riveting tale under extreme conditions that persist in the world offers rich texture to the principles and humanity that drive culture today. No character is a caricature and even the absolutes are situational. And, at the end of the day all we can do is try to do good and maybe we'll even find love. There's a lot of integrity here, by which I mean that paying attention to what the author believes will help you live a better life. The last chapter set up a parallel that I didn't expect, so now I'm tempted to listen to it all over again!

loved it and did not want it to end. characters are perfect and real. well done Turow

I have liked all of Scott Turow’s other books but this one fell flat for me. The details about Bosnia and international courts were interesting. The rest seemed like a collection of random eccentric characters dreamed up as part of a post-divorce wish fulfillment fantasy. #tagsgiving #sweepstakes #UnlikelyHero #Bosnia #Dark #Provocative #suspenseful

I enjoyed this book, the narrator was great and I recommend it to everyone. thanks

This won't be a retelling of the story as there are plenty of good ones out there already.

As fascinating (if war can be fascinating) as the plot, military and government shenanigans, mostly foreign setting, International Court, etc. were, the one thing I have to mention was his character "Atilla." I read probably way too much for my own good, but of all the characters I've come across, Atilla in this book is a classic. Her self-description is priceless. Esma was as uninspired as Atilla was the opposite.

And the narrator! Wow. I will be looking for him as well. He has that tenor sort of voice, if that is the right descriptor for the tone, that I so enjoy.

Thanks for an entertaining and informative several hours.

You may want to read this in print or on Kindle, but do NOT get the audio version. For a best-selling author, you'd think they could hire a competent narrator. Pyle cannot do foreign accents, which is a problem since major characters have British, Australian, and Indonesian accents. All of these accents (and many more that he butchers) are ludicrous. Turow's characters are two-dimensional to begin with; with atrocious accents, it's almost impossible to take them seriously. Pyle also can't pronounce French, and he is under the impression that Nantes and Bruges are two-syllable words. It was excruciating to listen to this recording.

Less than I expected from Turow


I've read many of his books and have always enjoyed the stories and the characters. I appreciate how he weaves legal issues together. I like the change in setting to Europe and the interesting story. What I did NOT like was the unnecessary sex scenes and the character of Attila. He tried way too hard to create a foul-mouthed woman who appeared to have a masculine identity. Some of the sex scenes were clearly written from a male fantasy. Naturally the 55 year old main character is attracted to women 15+ years younger and of course they're highly attracted to him. Another male fantasy. Very disappointing!

This was Disappointing for a Scott Turow book. Excess detail made it confusing and boring.