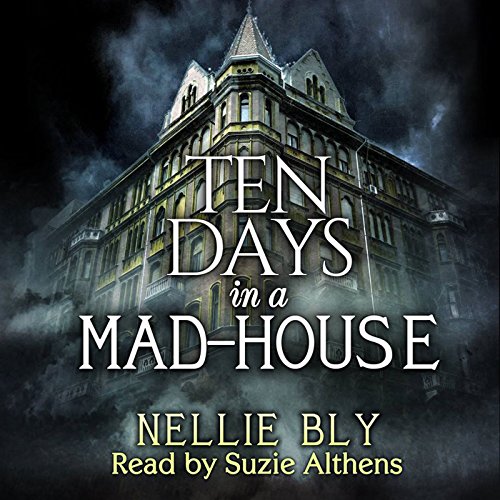 Ten Days in a Madhouse

No one could protect her once she was inside. No friend would hear her if she screamed. A brilliant undercover journalist and actress, Nellie Bly is admitted into Blackwell's Island asylum in New York as a homeless "crazy" lady. What will she be in 10 days?

The year is 1887, and the public is unaware of how patients are treated in asylums. One of the world's first female journalists and an actress, she takes on the role of an insane woman to gain inside access, then writes this expose for the New York World. The risks are high. Misdiagnoses and cruelty set the stage for Nellie's performance of a lifetime. Here is a woman with bravery and heart who brings history to life in this narrative.

Nellie Bly's story will be released as a movie in September 2015, starring Caroline Barry and Christopher Lambert.

In 1887, Bly had herself admitted to The Women's Lunatic Asylum on Blackwell's Island. In Ten Days in a Madhouse she shares her experience of diagnosis and incarceration for what was deemed a "mental illness."

The book is a remarkable insight into the diagnosis and treatment of mental illness in New York in 1887 and at the time her work was published it caused considerably controversy. It’s a fascinating read for anyone interested in the history of psychology, journalism or for anyone looking for some interesting non-fiction.

Bly’s experiences are frightening and disturbing. While incarcerated she meets other apparently sane women who have been confined for reasons such as convalescence from physical illness, poverty and in one case for speaking German and no English. The patients are given nearly inedible food, occasional cold baths and insufficient clothing and heating. Those deemed “dangerous” endure torture from those charged with their care.

Suzie Althens does a fantastic job at distinguishing the variety of characters. Her voicing of Bly is soft spoken and during the stages of deception the voice becomes passive and lacks tone, which is ideal for capturing what it may have been like for Bly trying to convince people she is mentally disturbed. It's a great performance of what is a very interesting book.

This audiobook was provided by the author, narrator, or publisher at no cost in exchange for an unbiased review courtesy of AudiobookBlast dot com.

You’d be MAD not to listen this book!

What an amazing tale of undercover journalism by the amazing Nellie Bly aka Brown. Starting from her assignment and practice as a “crazy” person to the ultimate trial and renovations of Blackwell’s Island, you are gripped by details. You can practically feel yourself sitting next to her as she describes her ordeal.

Anyone with an interest in Mental Health, Social Reform, Women’s Rights or Undercover Journalism will be mesmerized from beginning to end. The narrator is excellent and brings the story to life. I wish all of Nellie Bly’s writings were on Audible.

I was shocked & horrified by the mistreatment of the mental patients that were sent to the Blackwell's Island institution for the mentally insane. That being said listening to the story as written by Nellie Bly was an eye opener to the true cruelty that existed for such patients at that time. Nellie Bly herself was an amazing & courageous woman. I highly recommend this book!

I was interested in the contents of Ten Days in a Madhouse as I was a psychiatric nurse in the 'One Flew Over the Coco's Nest' days and wanted to know what the environment and happenings would have been in the early 1900's. The account was factually written - this happened, that happened, I saw this, I saw that... Basically all I learned was that people, some of which who should not have been there, were placed in places where they were bored, had little to do, were totally regimented and at times were used as unpaid labour (it was called occupational therapy in the '60's). I am not certain what I expected but what I got was a credible, dry and factual diary rooted in the actual time and place. No surprises for me but since there were so many changes and monies spent due to Bly's reporting it must have been an eye opener in her time. I was gifted this book for an honest review by audibleblastdotcom. Review by Evi the wife.

Very interesting but sad story by a reporter doing a story on the poor conditions in an insane asylum. The narrator was very good.

I received a free copy of this audio from Audiobook Blast for a review.

A riveting acccount of a important time in history

TEN DAYS IN A MADHOUSE

* I received a free copy of this audiobook through AudioBookBlast dot com in exchange for an honest review.

In 1887 very little was known and even less was understood about the field of mental health. In fact, I'm not even sure if the term "mental health" was even in use in that historic time period.

This book is the true story of Nellie Bly. Nellie was an actress and one of the first female newspaper reporters. She was sent by the "New York World" newspaper to do an expose on how patients are treated in 'modern day' asylums.

Nellie uses her acting skills to have herself declared insane by four medical doctors. This feat should have been difficult, but it proves to be alarmingly easy.

Nellie convinces the doctors that not only is she insane, but that she is also homeless and destitute. Because of the combination of these attributes, Nellie finds herself admitted to The Blackwell's Island Lunatic Asylum. This is where Nellie wanted to go to complete her assignment.

What Nellie discovers and subsequently writes about in the newspaper gives the public it's first ever glimpse into what life inside an insane asylum is really like. Nellie exposes cruelty, bullying, inhumane conditions and the lack of any scientific testing measures.

The narrator of TEN DAYS IN A MADHOUSE has a wonderful voice. She is able to convey not only emotions, but also the state of mind of the characters. Her voice is refined and comes across as perfect for a pioneering female journalist during the late 1880s.

If you have never read or listened to the story of Nellie Bly before, I suggest you purchase this audiobook right away.

The story is fascinating and this was a major turning point in how mental health was perceived and how patients were treated. Without Nellie Bly's investigative journalism many more people may have died and thousands more would have had to endure harsh treatment for many more years.

"As the doctor was about to leave the pavilion [at Bellevue Mental Hospital] Ms. Tilly Maird discovered that she was in an insane ward. She went to Dr. Field and asked him why she had been sent there. 'Have you just found out you are in an insane asylum' asked the doctor.
'Yes, my friend said they were sending me to a convalescent ward to be treated for nervous debility from which I am suffering since my illness. I want to get out of this place immediately.'
'Well, you won't get out in a hurry,' he said with a quick laugh.
'If you know anything at all' she responded, 'You should be able to tell that I am perfectly sane. Why don't you test me?'
'We know all we want to on that score,' said the doctor and he left the poor girl condemned to an insane asylum, probably for life, without giving her one feeble chance to prove her sanity. "

If you could sum up Ten Days in a Madhouse in three words, what would they be?

What other book might you compare Ten Days in a Madhouse to and why?

One flew over the cuckoo's nest. Telling an indepth goings on inside an insane asylum.

I thought this book is a great quick listen for a trip, plane ride, or an evening listen. It was in depth enough to really show the real going ons in this period of time.

I am always interested in reading stories of women who were leaders in their fields and Nellie Bly was definitely one of them for journalism. I appreciated her honest approach as an undercover mentally ill patient, her desire to tell the truth in an unbiased manner, and even though it did not turn out as she had hoped, found optimism and change for those less fortunate. It was a great read.

Suzie Athens performs admirably the voice of Nellie, keeping the narration simple and engaging. With the many characters and the overall subject manner being as it was, Athens captured the perfect pacing for a historical recounting.

I would recommend this book to all.

This book was given to me in exchange for an honest review.

Luckily, You're Only There for Two Days

The author tells her story of how she conducted some investigative journalism by posing as an insane woman in order to intentionally get herself committed to a mental institution and then report back on conditions inside. She takes us through the set up and how she was able to get herself evaluated (which was hardly an evaluation) and deemed insane. Then she tells us about her first two days at the asylum in great detail. She introduces us to many others that were committed there and the deplorable conditions they all suffered. She skips forward then in order for us not to get bored since apparently the following eight days are repetitious of the first couple of days. I completely appreciate that the author did that for the reader.

All in all, the story is interesting, and exactly what I expected based on the summary I read. The narrator is good too. I felt as if Nellie Bly were telling her story in a recording. I liked that other speakers weren't voiced in a completely different manner, dialect, or accent; which is something I very much enjoy narrators doing in most books. In this book however, since it is Nellie's story, I like that the narrator stayed in character as Nellie and only slightly changed voices as anyone might do as an imitation of someone when telling another person what someone else said. I hope that makes sense.

I was provided this audiobook at not charge by the author, publisher and/or narrator in exchange for an unbiased review.

Not sure where to start here. Ten Days in a Madhouse is not BAD, it just: Meh+, and Meh+ is not AWSOME. I find this story a bit short, and long at the same time. How is that possible? Well, this book does it. Nellie Bly is not a good storyteller, but not the worst ever. I would give this book a 3 out of 5.

So should you get this book? Well, yeah if you have 2 hrs and 50 mins that you want to use on a bit boring story! The thing is that i would still get a Nellie Bly book. She has a voice, she just needs to fine tune it. She needs to find another story! I would be willing to listen to it again!

Well, Suzie Althens almost save this story. She is good, and the only reason i give her a 4 and not a 5of 5 is that her voice work is not perfect! Her accents, voices, and different people voice work is almost perfect! Suzie Althens made me a fan, and if she reads a Nellie Bly story again i will be there!

"I was provided this audiobook at no charge by the author, publisher and/or narrator in exchange for an unbiased review via AudiobookBlast dot com"