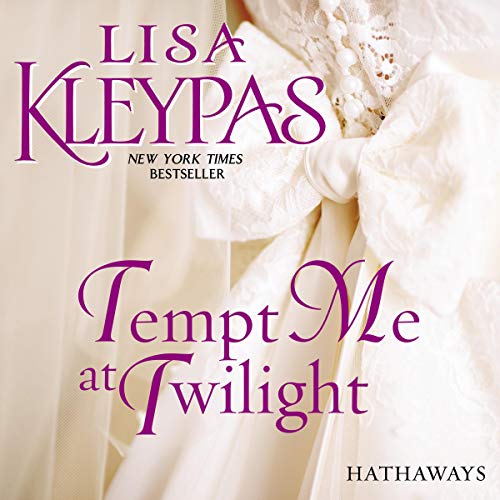 Tempt Me at Twilight: A Novel

A flirtation between a manipulative genius and an eccentric beauty leads to scandal in this revised and updated edition of the third book of legendary New York Times best-selling author Lisa Kleypas's popular Victorian romance series featuring the unforgettable Hathaways.

Though she adores her quirky family, Poppy longs for a conventional life. But nothing, especially love, is ordinary when you’re a Hathaway....During a stay at the magnificent Rutledge Hotel in London, effervescent Poppy Hathaway captures the attention of Harry Rutledge himself. With his brilliant mind and ruthless nature, Harry does whatever it takes to get what he wants. Fascinated by Poppy’s sweetness and charm, he comes up with a devious plot to steal her from another man and marry her himself.

At first, Poppy is charmed by the handsome genius, who rescues her from scandal with an offer of marriage. But when she discovers how her new husband betrayed her, Poppy flees the marriage. Now it’s up to Harry to prove he can change his ways. Only by opening his heart, and loving Poppy with all the tenderness he’s capable of, will he convince her to give him another chance. And despite Poppy’s reluctance to forgive him, she realizes her shrewd, sexy husband may just turn out to be the man of her dreams.

Excellent !!! Third book in the series and they just keep getting better ! Lisa Kleypas My new favorite author ! Plus Rosalyn Landor is the best narrator in the business!! The best combination in my opinion. Love love this story !!

I don't know how many ways I can describe how much

Lisa Kleypas, thank you, for an absolutely wonderful story. I don't know how many adjectives it would take to describe the joy this book gave me. I cried, laughed and throughout enjoyed all of it. You definitely have a gift. Thank you for allowing me to go on this journey with you.

My favorite in the series so far!!

Hilarious, witty, and entertaining!! I love the chemistry of the characters and the dynamics of the Hathaway tribe. Lisa Kleypas is by far one of my favorite authors and I am growing to enjoy R. Landor as well.

This is my 2nd read thru of the Series. Love so many things about it- Harry hiding all those vulnerabilities... and Poppy slowly unwinding him, was magical. Supporting characters, favorites from previous installments are active throughout, adding humor and warmth. You can’t read these books without wanting to be a part of this family! 5 stars for a well written H/H, good chemistry & dialogue. Onto Book 4!

I LOVED this book.

I have not laughed as much while listening to a novel. It is a well written story with well developed characters. The romance is sweet and it left me feeling good and hopeful. I like both lead characters. This is the first book that I have heard from this series and I will surely be purchasing the others. The narrator was excellent. Amongst the best !

Loved the narrator, the story line had unexpected twists and turns. I laughed so hard at the animals in the story, the h/h had just the right amount of angst, the steam level was a 3, needed more romance. Overall a fantastic listen.

I love the story. I couldn't put it down I always love a villain and princess story. I can't wait until the next book, continuing the Hathaway saga. Definitely worth a credit. I

I wanted to like this story so much. Im reading the Hathaway books in order, and I always look ahead to see what’s in store next. This one looked particularly different and I was excited about Poppy falling for the hotelier Harry Rutledge. But she becomes wishy washy about who she wants to be with, and Harry seems like a monster at first who bullies her to the alter. I can’t stand Marks, her companion for most of the book and contemplated not finishing the series, since she’s the heroine in the next book.
However, when poppy finally visits her family in Hampshire towards the end of the book is when the story finally moves forward. When the Hathaways are together as a family (with Cam and Merripen) the book finally shines like all of Kleypas books, and Poppy’s character makes more sense. When Marks finally tells Poppy who Harry is the characters come to life a little more. But until we get to that point as a reader, all these characters seem small minded, dumb, or just plain mean and snobbish. I guess you don’t know someone until you know someone! The hot and heavy scenes are ok, though Harry seems to always be high handed and a brute. Still not my favorite but once I’m in a series I’m pretty locked in.

Best of the series so far

LK has come up with a unique plot, believable and touching.I’m looking forward to the next two novels.

I love the kooky Hathaway family! Fun read with some steam. Looking forward to finishing the series.

This is a bit more action filled than the others and I did enjoy that. It was better than the second and I did like Poppy a lot. I also liked the hidden relationships between other characters that came out during this book and set the scene for the next one.