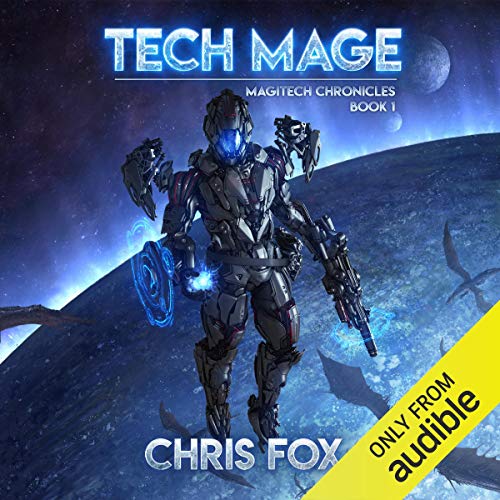 Enslaved and Forced to Fight Dragons

Aran awakens in chains with no memory. He’s conscripted into the Confederate Marines as a Tech Mage, given a spellrifle, then hurled into the war with the draconic Krox and their Void Wyrm masters.

Desperate to escape, Aran struggles to master his abilities, while surviving the Krox onslaught. Fighting alongside him are a Major who will do anything to win, a Captain who will stop at nothing to see him dead, and a woman whose past is as blank as his own.

Caught between survival and loyalty Aran must choose. If he flees he will live, but the Krox will burn the galaxy. Stopping them requires a price Aran may be unable to pay:

Learning to trust the very people who enslaved him.

At first I wasn't sure about this book but about 30 minutes in I was sold. The magic system although based on your traditional Dungeons and Dragons style has a very unique and interesting spin on it. The characters are related and dialogue is good. Overall there could be some more world building to help give readers a better idea of how everything fits together.

a solid story with likeable characters.

I really enjoyed the combination of magic and technology employed. I am also a fan of dragons, and space ships. I am definitely looking forward to the continuation of the story.

This was an utterly fascinating read. Imagine taking all the futuristic world of starship combat, but then mixing it with elements of Mages that weave magic through sigils or glyphs in the air to form complex spells to either cast defensive or offensive spells. Then add in armour that is specially designed to do battle (void armour) in these circumstances, along with pistols and rifles that are able to cast magic as well, at different levels, depending on the capability of the user. There are potions as well that allow for a range of different things, depending on who brewed it – healing, invisibility, amplification. Then there are the Krox, the enemy, whose allies are Void Wyrms, or as we know them, Dragons. So we have starships, with spell cannons and spell drives, casting offensive and defensive magic against Dragons in space.
It is a pretty fun concept, made all the better by Chris Fox and his well-developed and engaging characters as well as a storyline that is at the same time thrilling and exhilarating. The story moves at an incredible speed, and there is so much exceptional detail, the dialogue is masterful, and although there are elements from some different stories I can think of (such as J.S. Morin’s Black Ocean Series), there are very few books that come to mind that combine Magic and Technology so completely as this series, or do it as well.
The main story starts with the main character, Aran, awakening with no memory, nothing, to be told that he has been mind-wiped and is now the property of some slavers. He makes a pact with one of the other slaves, and through a series of events, they end up under another Slaver called Nara.
Through another series of events, Aran and Nara end up with a Major of the Confederate Army, aboard her ship, ‘The Wyrm Hunter’. They are all that stand between the Krox, and army of Void Wyrms and a planet full of people, as well as possibly the future of the galaxy.
This is an exceptional story, incredibly action packed, with the most amazing storyline, it is part thrilling, part terrifying, with the combination of Magic and Technology mixed in this unique hybrid that creates this story that you will just not be able to put down, with characters that you will be become very engaged with.
This is just a sensational thrill ride, and should not be missed.
I have to be honest, at first I was a little unsure about the Narrator, but he quickly grew on me, and he tells the story in a way that is engaging, thrilling, with a good range of voices and with the right sounding dialogue to really convey the power of the story, the angst, the fear, the triumphs and the victories as well as the losses and the tragedy.
Burke does a wonderful job overall, really bringing Fox's story to life and this is an excellent listen.

I loved this book. I started out with so many questions which kept me enthralled. I love the battles, and magic. I loved the progression of the story. I really hope there is a second because I'm dying to know what happens next!

Great book with an exciting combination of science fiction and fantasy elements. Try it out!

I was provided a credit by the author to try out his series and I look forward to buying the second book Void Wyrm when it releases to audible. Overall I liked the variety that this book provided and the characters really have fun personalities. The fight scenes are fun and exciting ranging from epic space battles to heated street combat. The magic system is a unique and fun concept of being primarily linked to their armor/weaponry for the tech mages and the mages gain specific abilities by entering catalysts thoughout the universe.

Definitely try this out and keep up with Chris Fox if you like SciFi, Fantasy, or both!

This was a truly original sci-fi/fantasy story, with magic, dragons, power suits, and zombies. It had a captivating start and held my interest throughout the novel. Chris Fox did a great job writing the characters, and I grew to appreciate them all by the end, but Sgt Cruz was probably my favorite. The narrator did a great job with the characters voices and pacing. It sounds like he really gets into the story in the more action-oriented parts as well. Overall a great story and definitely worth a listen, I look forward to listening to book two. The author has gifted me other books, including the sequel to this one with no expectation of a review, but I purchased this one myself. This review is my unbiased opinion.

Your dropped right into the action and quickly became entranced with the story. Really can't wait to listen to the next book

The best at what it does

I read a lot of science fiction, in fact it's pretty much exclusively my genre of choice. This book is the best I have ever read at what I'll call &quot;science fantasy&quot;. All the military science fiction boxes get checked, but it's mixed with things that are obviously fantasy novel stereotypes and set in an obviously fantastical world. Both these aspects are fully present and I never felt like this book fell into the trap of being exclusively one genre while paying lip service to the other. It's not &quot;science fiction with magic instead of technobabble&quot;, nor is it &quot;a fantasy novel in space&quot;. The world created is a natural evolution of what would happen in your typical fantasy world if technology was allowed to grow and develop.

Oh, and on a personal note, there are a few times throughout the book that I heard some &quot;military lingo&quot; being used. The soldiers actually call things what you would expect (food is a &quot;chow line&quot;, working out is &quot;PT&quot;, etc). I appreciate that the author is either familiar with the military, or at least did some research beforehand.

This was the first space/magic/tec fantasy I listened to, and it was fun! There were a few points where I felt the story was rushed along and there could have been more tension, but then again, it is set up to be a fast rollercoaster from the start. I'll definitely be listening to the rest of this series! If you are looking for a fun action plot that doesn't take itself too seriously, then this is perfect! narration was great too!

slow start but gets better

i wasn't in love with the beginning, but as it became less about how they use magic and more about what they do with it, it got better