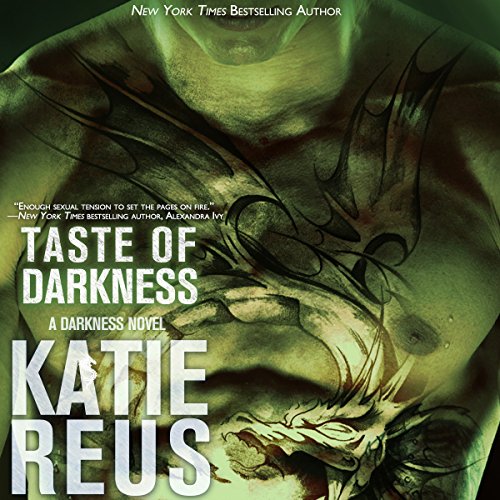 He spent more than a thousand years imprisoned in Hell....

Drake is an ancient dragon shifter, one of the most powerful beings in existence, but over a millennium trapped in utter darkness has left him ill-equipped for modern society. If it wasn't for Victoria, the sweet female brave enough to befriend him, he'd be lost. She's smart and gorgeous and everything he never dared dream of during his years of agonizing loneliness. He may not have anything to offer her, but one thing he knows for sure: he'd die to keep her safe.

Only to fall into the heaven of her touch.

Victoria is a wolf shifter, healer of the Stavros pack. She's seen a lot, but she's never met anybody quite like Drake, the fiery, fascinating shifter who can blaze through the skies unseen by mere mortals. He's lost, dangerous, and the last male she should fall in love with, but the more time she spends helping him navigate modern life, the deeper - and hotter - their connection becomes. She's thrilled when they finally locate his family, but reuniting with his people plunges them both into unimaginable danger. It's a race against the clock trying to figure out who wants them dead and who they can trust, especially when the threat is closer than they ever imagined.

Another awesome story and performance, loved every minute of it!

Katie Reus's Darkness series is definitely a worthy series to listen too and reminds of Coreene Callahan's Dragonfury series. If you like dragons and wolf shifter stories, this is a series you'll want to add to your collection. These stories are slightly shorter than the average book; however, they are well written and both the characters and plot are well developed. There's plenty of action, suspense with lots of twists, and the romance is a steady burn that builds into an inferno.

Taste of Darkness picks up where book one ends, and now Drake is trying to adapt to the world he has not seen in over a 1000 years. When he was a young boy, he was scarified and cast into hell; however, four months earlier, he was freed when a hell gate was opened. During his escape, he meets his future mate Victoria and her pack and assists them in closing the hell gate to prevent demons from escaping into the world.

Even though Drake is now free, he has not claimed his mate. Victoria has been helping him learn his new world and is ready to take the next step in their relationship; however, before he will claim her, he feels he must first be worthy and able to provide and protect her. There's a lot of chemistry and build up between them.

Unfortunately, Drake doesn't remember anything from his past or how he ended up in hell. But when his brother and sister come to visit him, and he is reunited with his family, his memories start to slowly surface, and he soon realizes someone close to him betrayed him. After his family and mate are attacked, suspicions are cast on the wrong person.

This was a great story and well worth the time invested in listening to it! I'm looking forward to listening to the other stories.

I love this story!

Where does Taste of Darkness, Volume 2 rank among all the audiobooks you’ve listened to so far?

It is one of the best audiobooks I have listened to.The narrator does a good job.:) His voice is hot!

He had a hot voice.I got goose bumps.I also liked his female voices!:) I am very pleased with his performance.

If you love paranormal romance listen to all the stories in this series.Katie is a good author!:)

Where does Taste of Darkness, Volume 2 rank among all the audiobooks you’ve listened to so far?

I love Drake he is strong, but not too strong when it comes to those he loves

He brings the story to life. The narrator does a fantastic job

Fascinating storyline!!! I’m so excited about this series. I love getting to know the characters and seeing how they all intertwine.

I love this series! The characters have depth and each are intriguing in their special way. I look forward to reading all of the books in the series.

I purchased this audiobook because I loved the story of Drake the Dragon and the time he spent in helll. I enjoyed the audiobook as much as I enjoyed the e-book. I would recommend this purchase if you like paranormal stories. Very entertaining.

Drake's story is just one of those that's perfect for a hero that you absolutely fall head over heels in love with. Sent to hell at the age of 12, he's spent the last 1500 years there. He knows virtually nothing of the world or dragon shifters (which he is one of). He has no memory of how he got there or what happened before being sent there. It's obvious he's been traumatized by the time spent there...did you catch that...1500 years?!?!?

So, yeah, he's a little bit messed up. But from the moment he sees Victoria, he knows that she's his. It doesn't matter that she's a wolf shifter. He's connected to her.

But the best thing about Drake is that he's this vulnerable, wounded guy at the same time he's seriously tough and alpha and so much...just sexy male. Yum! I loved him and watching him love Victoria...yeah, it just made me happy.

I'm really loving this series and love that there's so many books of it out. I need to go grab book #3 now and download it onto my iPod because I adore Katie Reus's shifters. She writes some sexy shifters and I'm quickly falling in love with all of them.

BTW, you can read any of these books as stand-alones.

The story on Drake and Victoria is fabulous! Drake and Victoria both have such strong personalities. They match each other. Their love for each other is beautiful. Both looking out for each other. The storyline and performance are very good! The mystery of Drake being kidnapped and held in hell for 1500 years was horrible. Very interesting plot. Ms. Katie Reus is a very good writer and Jeffrey Kafer as always performed wonderfully. I hope Ms. Reus will continue with more books on this series.

This was a very good story and addition to the series. I really liked both Victoria and Drake and enjoyed their story very much.

Victoria is a wolf shifter and a healer for her pack. She was abandoned by her family when she was young and now the pack is all she has. Sometimes the people in the pack are a bit too protective and Victoria usually doesn't mind...at least until she meets Drake and wants people to stop interfering.

Drake is a dragon shifter who was trapped in hell at the age of 12 and was stuck there for 1500 years. He was able to escape when someone opened a hellgate (in book #1) but he had no memories of his past and nowhere to go. Drake saved the daughter of the local wolf alpha when he's trying to gain his freedom and ends up working with the pack to close the gate. He stays with them afterwards, mostly because Victoria is part of the pack.

When the story begins, Drake has been out of hell for 4 months and Victoria and the pack have been helping him get integrated to what basically amounts to a whole new time period (since Drake hasn't been on Earth for 1500 years). Drake knew that Victoria was his the moment he smelled her. The only reason he's held off in showing his interest in romantic relationship with her is because he wants to be able to provide for her if she's going to be his mate. Regardless of Drake's decision, it's hard for both of them to just be friends and ignore their attraction to each other and Victoria isn't even sure why Drake is reluctant because he doesn't tell her at first. There's also an issue with Gabriel acting too much like a big brother and causing hassle for Victoria and Drake whenever they try to spend time together.

Despite the issues, Drake ends up making a claiming gesture towards Victoria that proves to her that the attraction is mutual. Once she knows this, Victoria is unwilling to wait for whatever is holding Drake back and takes actions to move things along. Of course just about this time, other dragons start showing up after hearing about a new dragon shifter that's hanging out with a wolf pack in their area. Two of the new dragons end up being Drake's brother and sister but after what Drake went through, their reunion is bumpy at best. As Drake is trying to secure his mating with Victoria as well as get to know his family, trouble stalks them when an old enemy decides that Drake being back is too dangerous. Thankfully, the trouble is handled and the story ends with Drake and Victoria starting their well deserved HEA together.

This was a very enjoyable story. I liked Victoria very much. She was nice and smart while being sensible and even ruthless when needed. While the first two attributes aren't hard to find in heroines nowadays, the last two are a lot harder to find in the right way. Drake was a good hero. He was protective...maybe a bit too much but he doesn't get overly pushy about it. Overall, the story was very good and engaging. I'd recommend it. :)

What did you love best about Taste of Darkness, Volume 2?

Seeing the friends-to-lovers relationship grow between Drake and Victoria.

Drake. After thousands of years being in a Hell dimension, he still has a good heart and wants to give love.

Have you listened to any of Jeffrey Kafer’s other performances before? How does this one compare?

Jeffrey does a wonderful job with this performance. He voices both males and females very well, and keeps you engaged.

Yes, but I feel that way about every book in this series. It's just that good!

While I love all the characters in this world, I especially love Katie Reus' dragons!