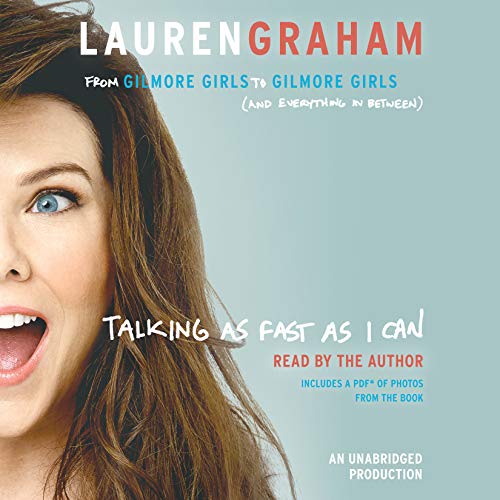 In this collection of personal essays, the beloved star of Gilmore Girls and Parenthood reveals stories about life, love, and working as a woman in Hollywood - along with behind-the-scenes dispatches from the set of the new Gilmore Girls, where she plays the fast-talking Lorelai Gilmore once again. In Talking as Fast as I Can, Lauren Graham hits pause for a moment and looks back on her life, sharing laugh-out-loud stories about growing up, starting out as an actress, and, years later, sitting in her trailer on the Parenthood set and asking herself, “Did you, um, make it?” She opens up about the challenges of being single in Hollywood (“Strangers were worried about me; that’s how long I was single!”), the time she was asked to audition her butt for a role, and her experience being a judge on Project Runway (“It’s like I had a fashion-induced blackout”).

In “What It Was Like, Part One”, Graham sits down for an epic Gilmore Girls marathon and reflects on being cast as the fast-talking Lorelai Gilmore. The essay “What It Was Like, Part Two” reveals how it felt to pick up the role again nine years later and what doing so has meant to her. Some more things you will learn about Lauren: She once tried to go vegan just to bond with Ellen DeGeneres, she’s aware that meeting guys at awards shows has its pitfalls (“If you’re meeting som

I wanted to hear Lorelai’s voice once again... but I got so much more!

Lauren is such an amazing storyteller, full of sparkling humor and wit. She manages to be inspirational (let’s talk about lifting each other up, girls!), wise, and hilarious and when the last words were spoken I felt like I just put down the phone after a long chat with my best friend.
And yes, Lauren, the last 4 words seem a cliffhanger to me too!

Lauren Graham is a gem. Going back to Stars Hollow was such a delight. And getting the chance to know her personal journey is tremendous. I absolutely loved it.

As much as I love her and look to her as a mother figure, I didn't know her other than as her GG persona. But she's exactly as you would expect. She is the real life Gilmore girl. Thank you Lauren for giving me the closure (or is it?) that I needed in order to move on with my life knowing that Lorelai Gilmore really does exist.

Great but where are the photos?

Great book and to Lauren, herself, is great. How can audible listeners see the referenced photos?

Only wish that they included a link to see the photos she was referring to.

I never have finished a book in one sitting until now, yep about 4 and a half hours and funny it didn't seem that long. I say book because on top of the audio version I just finished listening to I followed along with the book, your welcome Ms. Graham! I Laughed some and said atta girl in others for choices she made. Either version or both you can't go wrong.

I am not one to give books or in this case audiobooks stunning reviews with every aspect earning 5 of 5 stars. I will not pretend I came upon this book by accident or because it was in my recommendations but entirely because I am both a Lauren Graham and Gilmore Girls fan. Although I am a fan, I was more focused on the stories she had to share and words she chose to write them with rather than the fact that this was a peek in to her life. I will be honest, I almost never read celebrity memoirs but this book made me feel a range of emotions, and the combination of Graham's written words and her voice reading it, made every line feel wonderfully genuine. It does not need to be compared and contrasted to other books because this is her unique story. She is very intelligent, and witty, and she sprinkled this book with many valuable pieces of advice that I believe anyone from eight to eighty years old could use. It was a pleasure to listen to and quite inspiring. The non linear story line also helps to emphasize the purpose of every chapter. I hope to one day be able to publish a book of my own and the advice from one of her mentors that she shares with us towards the end of her book has really stressed the importance of writing everyday and learning to make it less of a dreaded task and more so something necessary and enjoyable. Thank you Lauren for sharing these quirky anecdotes and invaluable peices of advice with us.

Lauren Graham is a treasure

This audiobook is one of the best I've heard.
Not only was the book itself absolutely amazing, but having Lauren read it made it a million times better. I need like ten more of these books girl!

quick listen, but nothing special

I am a huge fan of Lauren Graham, so I enjoyed listening to her performance. I love the way that she talks and her personality is infused in the book. However the book is very disconnected. She starts with her childhood, goes into young adulthood, College, working dead-end jobs. She talks about the plays she did in high school and college, and all of her early acting. Then she discusses Gilmore Girls! However after talking about gilmoregirls she skips around going back into college going back to old jobs, Flash Forward to Parenthood. It was a little confusing.

Several times throughout the book she uses the same bits over and over and over again. Then she begins talking about her experience on Gilmore Girls a year in the life!!! This was also very fun to listen to. However as an audio book I think it was a little disconnected, and there are multiple pictures in the actual book that they do not provide when you purchase the audiobook. I definitely think it would be better if you spent $5 to get a used copy on Amazon.

Everything you expect from Lauren Graham!

Talking As Fast As I Can was everything and more! You feel like you sitting down with Lauren and laughing along with her! So much wit. And it was fantastic to hear/read her thoughts of her career & see her entries of the revival! Makes you heart swell! I definitely have some tear stains near the end of my book. Can't wait for whats to come with her new book in the future!

Great book. So much fun for anyone who loves Lauren Graham, Gilmore Girls, Parenthood or just overall fun and relatable stories!

How do your review a book like this or even the audiobook?

I loved getting the insight of how Lauren became the actress/author that she is now.

I liked that she doesn’t take herself too seriously but that she also gives us some great tidbits of sound advice. Even if it comes from her alter ego. HA

I very much enjoyed the fact that she narrated her own book.

I can only recommend it!
However it should be noted that one ought to be well acquainted with the Gilmore Girls Series for it is (as the title says) a main part of the book. It’s very nice to listen to since it’s narrated by Lauren Graham herself. If you like a funny and speedy entertainment then this is for you!!

And talking fast she did …

Just like I hoped for the book to be. Of course she reminds me of the favorite character we probably love but beyond that it was a easy listen and a well written book. Her narrating brought it all together and I found myself reacting to the things she would tell - almost like talking to someone on the phone. It’s the details I appreciate especially about the show. Would recommend to anyone that is a GG fan.

Back in Stars Hollow

I loved listening to all the behind the scenes stories that Lauren talks about. Furthermore, the fact that Lauren tells the story herself, it makes the audiobook so much better. It would have not been right if another speaker would have narrated the story.

It really is the role of the life time and Lauren Graham does a fantastic job in giving you the feeling that she’s actually talking to you (and that you are her best friend). It’s like listening to Lorelai, or even better because Lauren Graham is not fictional. It was such an easy listen and I enjoyed it so much and it makes me like „Gilmore Girls - A year in a life“ so much more. I’m not sure if it’s as enjoyable if you’re not a fan, but i would recommend it to every Gilmore Girls follower.

Lauren I love you

I love the story of mother and daughter and here Lauren Graham describes the making of the sequel very funny but emotional.