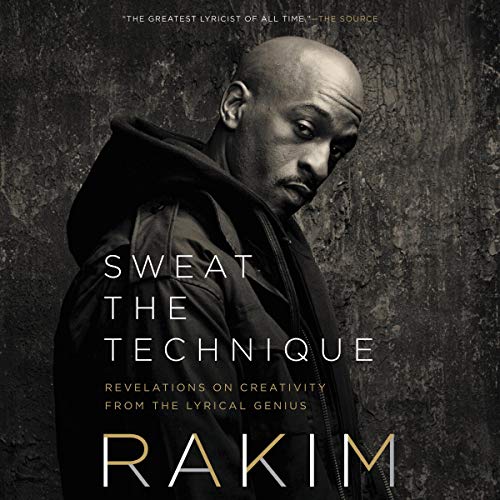 The musician and hip-hop legend - hailed as “the greatest MC of all time” and compared to Thelonious Monk - reimagines the writing handbook in this memoir and guide that incorporates the soulful genius, confidence, and creativity of a master artist.

When he exploded on the music scene, musical genius Rakim was hailed for his brilliant artistic style, adding layers, complexity, depth, musicality, and soul to rap. More than anyone, Rakim has changed the way MCs rhyme. Calm on the mic, his words combine in a frenzy of sound, using complicated patterns based on multisyllabic rhymes and internal rhythms. Rakim can tell a story about a down-on-his-luck man looking for a job and turn it into an epic tale and an unforgettable rhyme. He is not just a great songwriter - he’s a great modern writer.

Part memoir, part writing guide, Sweat the Technique offers insight into how Rakim thinks about words, music, writing, and rhyming as it teaches writers of all levels how to hone their craft. It is also a rare glimpse into Rakim’s private life, full of entertaining personal stories from his youth on Long Island growing up in a home and community filled with musicians to the clubs of New York and the studios of Los Angeles during his rise to the top of popular music. Rakim celebrates the influences that shaped his development, including the jazz music of John Coltrane and the spirituality of the streets, and shares anecdotes spotlighting personalities such as LL Cool J and Dr. Dre, among others.

Filled with valuable lessons for every writer, Sweat the Technique reveals the heart and mind of an artist and his love for great storytelling and, always, the words.

This was the dopest audio book I’ve heard yet.
Rakim for president ! I need a part 2

If you are a fan this book will interest you. It’s the story of his youth and how he came to be one of the BEST lyricist in HipHop of all time. Inspirational story, and a great perspective look thru the eyes of Rakim. I’m listening to it again.

Amazing insight from a Creative Genius

First let me say, I am a huge fan of Rakim’s music. So when I learned he had a book, I was immediately interested. To hear his story in his own words was awesome. It was especially important because for 30 years he has been such a private person. This book gives you insight into his creative process and work ethic. As an entrepreneur who also relies heavily on creativity and also can support, this book gave me several revelations that will help me with my business. I’m glad that he wrote it and that it was made available in audio format. Great listen, especially if you are an 80s-90s Hip Hop fan.

In true fashion, Rakim does not disappoint. He breaks down his lyrical genius to a science and delivers a profound awakening to expressiveness. I now have a deeper understanding of why a 12 year old girl from the midwest with no real understanding of hip-hop back in 87 would keep rewinding his tapes. The lyrics were captivating to me; deep even. I was too young to realize it then but I get it now. Knowledge of self....Indeed

The Greatest MC Ever

I’m glade he decided to tell his own story. Growing up I often wondered why it seemed like he wasn’t in any of the cultural movies or movements. I now know why. Some may have felt their star may have been dimmed alongside his. Rakim was a movement and with a legacy untarnished he can hold his head high despite the fact. I was in the fourth grade when Paid In Full was released. It changed the paradigm. There is Hip Hop before Rakim and after Rakim. His message in my opinion was needed then and is needed now. I always knew there was something big that split the group up. Although I glade they moved past it. Many artists can learn from him as it relates to holding some things secret but that’s just another aspect among many that makes him special. A stand up dude. Rakim never compromised his integrity.

I woke up one day and heard Rakim would be in Phoenix, AZ to promote his book at a book signing. I had a day off so I decided to cheat and order audible and got a delight as Rakim narrated the masterpiece. This book was well written as his lyrics and I could not stop listening. I traveled thru my teen years with Rakim, I even stopped to play tracks back that he had mentioned so I had a whole vibe going. As I stood in line to meet Rakim I has so many thoughts of what I would say. Finally that time came where I got to meet the Rap God. I thought about not asking a question that had to do with rap, but asked something that I learned from his audible. "Who's a better quarterback Brady, A Rogers, or Steve McNair"....he leand back in deep thought and all I could think was how passionate he was about him paying football in high school and I could hear that thru listening to him narrate his own audible.

Took me back in time

I loved this book. I am from New York and lived there during the time of the advent of rap and I have to admit that I was not a fan until later, although, I did appreciate the grassroots movements going on all over the city. I enjoyed having a peek into the making of a rap legend and really enjoyed hearing him narrate his own story. Congrats, Rakim, God bless.

Loved it...my first listening is the new reading on auidible as told by Rakim. This is complete. What a gift for the generations of future eMCees. No other way I would've wanted to access this story than as told and read through the mind & voice of Rakim. No interview could capture how Rakim organized his life story than in Sweat the Technique. Loved to experience this text while revisiting the music and unpacking the word play. One of the greatest stories ever told in Hip Hop. And this time, Rakim told me forreal. Essential reading for anyone that's serious about embracing the art of eMCeeing & the beautiful culture that is Hip Hop. Peace.

PS: @amazon Y'all need to create a way for us to review and rate on Amazon music app too. Especially after one completes listening to an entire album.

It’s what you think but better

Deep, Spiritual, and Thought Provoking. I always like Rakim, but now I respect him even more!!!!

As great as expected. Pure wisdom and great insights into the golden era of hip hop and the path of a young kid from Harlem. The authenticity of the reader being the master Rakim himself underlines the whole message of the book and makes it even more appealing. Definitely recommended.