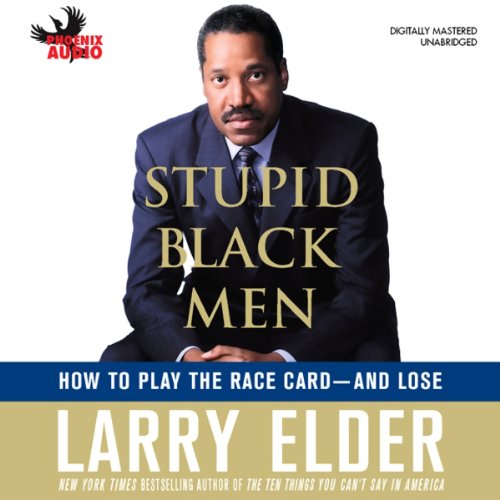 Is life unfair for black Americans?

Is racial equality the answer to every question of public policy?

Is a huge group of citizens kept down by "the man"?

Radio host and best-selling author Larry Elder has made a career out of being a thorn in the side of the conventional-wisdom crowd. He deflates the pompous and points out the completely logical truths hidden behind the nutty rhetoric and out-of-control pandering of politicians and the so-called leaders of a variety of special-interest groups.

In Stupid Black Men, he takes on the mind-set of those people who always capture the most media attention - as well as masses of public money - people who say that racism is the root of all problems and who end up hurting precisely those they claim to be helping.

Whether they are demagogues like Al Sharpton, established politicians like Hilary Clinton, or entertainers like Danny Glover, no one escapes Elder's cogent arguments and rapier wit. His sometimes hilarious and always infuriating examples of wrong-headedness skewer not just politicians for their smugness and hypocrisy but also actors, educators, religious leaders, and the "main-scream media" for keeping the story in the headlines. But Elder has a positive message, too: though they are fewer - and generally not as loudmouthed - there are leaders and role models today who want to sweep away race-based whining and urge everyone in America to share in the hard work, smart thinking, and optimism that make this country great.

Larry's book is truly an open minded lecture, that shows points who are hard to hear sometimes, but necessary to talk about. It's a beautiful knowledge sharing, and a breath of fresh air into an oversaturated world of bad news. Great!

Was a Democrat for many years because of my upbringing, but my views of my neighborhood and of my culture always had me second guessing everything. I never knew there were more people like me. Thank you for your words.

One of the best reads.

I’m a white guy. I’m not supposed to have an opinion. Larry Elder has a much needed message for the black community. Blaming others goes all the way back to our original parents. And even non religious scientists are beginning to discover that we all originated from the same two parents. The devil made me do it. The women you gave me made me do it. The white man made me do it. e.t.c.

For every great point that Mr. Elder makes regarding the exploitation and the lack of self responsibility that occurs within the black community he loses his way when he starts his self righteous promotion of the republican party agenda and the opinion that anything contrary to that agenda is flat out wrong.

Larry Elder is the MAN!!!

I LOVE Larry Elder. He is a breath of fresh air in politics today. He pulls no punches and does not suffer fools at all. You will be glad you picked this book.

Larry Elder is one of my favorite radio hosts. Much of this book is taken from segments of his show and he has a great knack for identifying hypocracy and illogical thinking. I applaud his courage in "telling it like it is" despite the opposition he gets from his detractors. Larry narrates the book and sounds as if he's reading it most of the time - he's much better when he just speaks off the cuff. All in all, an informative and entertaining read.

Not even worth a free credit

This book is just plain not good. This is not even from a idealogical point of view. It is just mixed thoughts with little clear vision. I would not recommend it to anyone.

I thoroughly enjoyed Larry's presentation. I thought it was dead on accurate. If a "person" works hard at achieving his goals and dreams, it doesn't matter what neighborhood he/she grew up in. The American Dream is still very real and attainable. Thank you Larry for putting the points so eloquently and clearly.

Love this man and this book!

stories have changed or should I say that they have become more numerous but everything that Larry has said in this book still applies to this day... And that is the sad part. but my hope is that more leave this book and exit the mindset. Viva El Elder!

Loved it. Larry tells it like it is. People really need to read this book