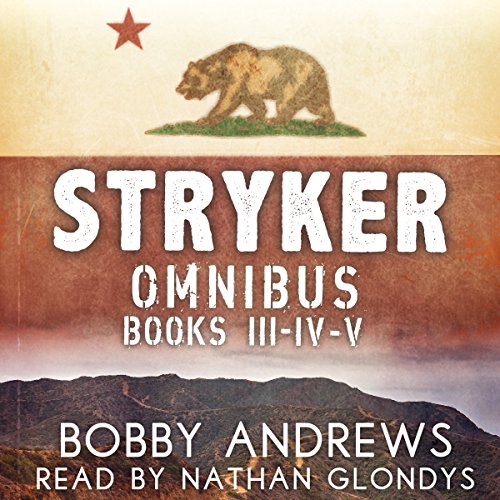 "You combined a good read with some thrilling outcomes which kept me wanting to read through the night. Thank you for writing this series."

"Your books about Stryker and the gang have kept me totally involved until my eyes get blurry and I have to take a break from reading. I love that you are educating your readers about our country and many things military along the way."

ISIS unleashed a weaponized version of the deadly Ebola virus, killing 97 percent of the worlds population. Only the immune and those who hunkered down in remote locations remain. Through the chaos that remains strides a giant of a man known only as Stryker. He is a former Force Recon Marine who has lost as much as anyone, but fights to preserve his honor and creed in the face of slave traders and terrorists.

Together with his former battle buddy, Edwards, they struggle to eliminate the remaining evil, even as the nations infrastructure crumbles and life becomes considerably more difficult. They care for three young women who survived the plague and attempt to give them lives that are as normal as possible under the circumstances.

Same Narrator as Book Two - Don't Do it

The second credit I wasted on these books ( I didn't even start this one!) I will always do a sample listen in the future.

A message for the author... There isn’t one special operator that has ever served in the U.S. military who thinks the border wall is a bad idea or waste of money. You should be ashamed to force your political beliefs into a story in such a ridiculous and inaccurate manner. Your protagonist shouldn’t have been a special operator if you wanted him to dislike and criticize the border wall. I could see one or all of the women having those views but never a special operator or even Marine for that matter. I really liked this series until you added that B.S. and will never listen to another one of your books. I am sick of entertainers (which you are) trying to brainwash the public with political agenda’s, the stories would be just fine without it unless it is a political based show/story and then it fits. Just remember you were good then you added political B.S. and now you suck. Hopefully, you read this and learn that some of us despise attempts to be politically influenced and stop doing it.

Books 1-2 were good enough to buy 3-5. Unfortunately the series won’t be completed due to the annoying narration.