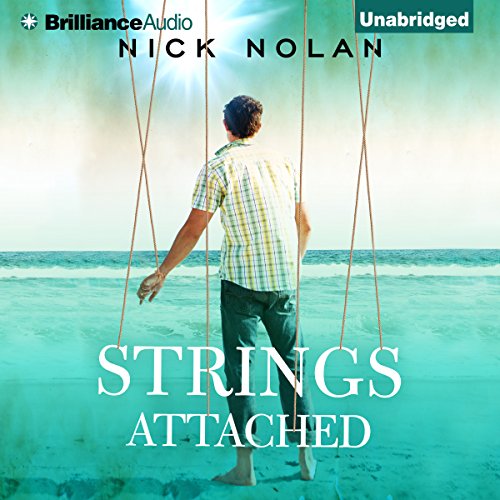 Closeted teenager Jeremy is sent to live with wealthy relatives after his mother enters rehab. Struggling to fit into the posh world of Ballena Beach, Jeremy joins the high school swim team, dates a popular girl, and begins to think he may have landed in paradise - until his great aunt Katharine starts to dictate his every move…and a late-night phone call insinuates that his father’s accidental death was not so accidental after all.

As Jeremy grows accustomed to the veneer of a fabulous life, so grows his need for answers - as well as the danger of immeasurable harm. Weaving together a murder mystery, sexual ambiguity, and characters with hidden identities and agendas, Nick Nolan offers listeners a deliciously witty novel about the "puppet" who wishes only to be a real boy. Strings Attached is also a surprisingly heartfelt story about coming-of-age and coming out - not necessarily in that order.

Luke Daniels has become one of my favorite narrators. He transforms this story from just an OK coming of age/coming out read, to a truly wonderful experience. I don't think I would have enjoyed this story as much if I had read it. The POVs constantly changed and the story drags a little. But Mr. Daniels made me really enjoyed tagging along on Jeremy's journey and tragic adventure. I look forward to the next audiobook in the series, Double Bond, which is Arthur's story.

I really enjoyed the play with the Pinocchio story threaded throughout the book. It was subtle and well executed rather than an obvious "re-telling" of a fairy tale set in a modern setting. It was a bit slow to start, and there were a few kind of tedious trope moments (denial of orientation long past when it is reasonable, crush on the hot jock, etc.). In spite of those things, once it got going I found that I was sucked in.

Maybe it is my own "daddy" issue's, but I felt that the sore subjects that Nick Nolan touched on in so far as relationships with parents and finding substitutes when biological parents fail really resonated. I fell in love with Arthur. This is for sure a coming of age story, and not awash in hot gay erotica, though it does have a few good moments.

Luke Daniels is one of the narrators that I think I always enjoy.

Just for the economics of it, I wouldn't spend a credit, but it is worth the whyspersync reduced pricing deal for sure.

Nope, not my kind of story. It was too teen oriented with adult themes. It was definitely a teen type of story about a teen guy realizing that he was gay. I feel they should have labeled it as a "young adult gay fiction."

Furthermore, I felt a little insulted the way that the author portrayed the female characters in the book. I absolutely hated the way the the narrator, Luke Daniels, used a high pitched irritating voice when he read the female lines.

The end of the story is open for a follow-up novel, however, I am confident I will not want to read it.

What would have made Strings Attached better?

Nothing I could think about

Would you ever listen to anything by Nick Nolan again?

It was all right

What character would you cut from Strings Attached?

They all should be edited heavily

I hope I can return the book

I've noticed, audio books that I enjoyed make often a different impression on my GR friends when they pick up an eBook after reading my review. No, it is not an excuse for loving a book, that someone might not, but just an attempt to explain that I have other criteria in rating an audio book, comparing to an eBook. A good audio book is for me 60% a plot and 40% a performance.

And Strings Attached had all my attention during listening to it. Yes, thanks to a terrific narration by Luke Daniels. He created a wonderful movie in my head, that had everything I needed to enjoy it. Let me say so: it started like a family drama, changed to Disney sweet tale, and then turned suddenly into a thriller, with a mystery part, that normally would make me roll my eyes. But here it was just about right. I totally bought it and ate up without hesitation. A poor boy who suddenly became a rich boy, whose life changed from one day to another, but who kept his heart at the right side.

A charming, sweet, quick pacing and multifaceted story-line, well-developed characters, many touching moments, not without a Disney influence, and an excellent narrating. What do you need more?!