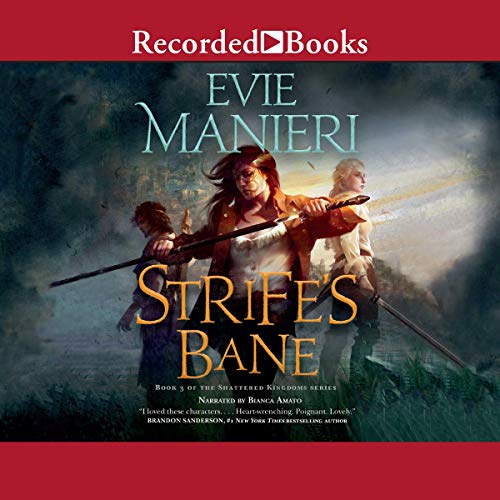 She was tainted. Once known as the Mongrel, Lahlil only had one purpose: to reap blood and carnage for those who paid the right price. And though the ravages of past wars haunted her every waking moment, when the Shadari called upon Lahlil to lead the rebellion against Norlanders - telepathic and bloodthirsty invaders who conquered their lands and enslaved their people to the mines - she delivered. Then she ran. Now, Lahlil must return to Shadar to save the person she loves the most and rebuild. What she finds first is a kingdom that has devolved to political discord and an old enemy's ships sailing just beyond the horizon.

Strife's Bane pushes a grand cast of familiar characters to the brink of ruin as the conclusion to Evie Manieri's Shattered Kingdom series. With Manieri's unique blend of magic, blood, and dramatic tension, the stakes have never been so high.

Never been more disappointed in a final book of a trilogy. Waited 2 or 3 yrs for this book and it's like the whole thing was written 2 weeks before it was due to drop. Total shame. I was truly looking forward to this book, too.