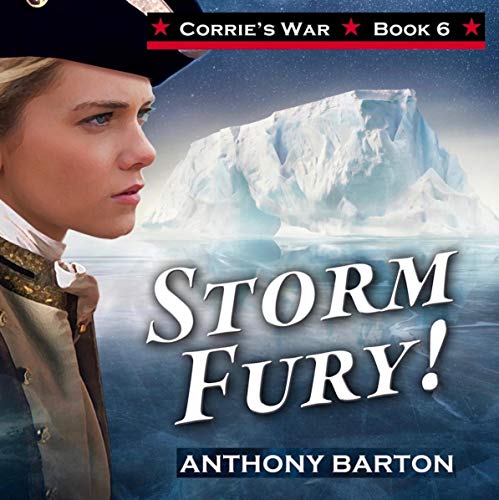 In Storm Fury! we find Corrie captaining the frigate Swift, off the coast of the country we know today as "Greenland". Corrie has just seen her best friend Tom Potts struck down in a ship-to-ship action, and it seems to her utterly unfair that Tom should have died so young. She wonders if there life after death, and if there is, what has become of Tom? Is her friend in some nether realm? Is Tom even now waking up in the afterlife and wondering where he is?

Sail the seas in this action-packed naval adventure of historical proportions.

England and France have declared war, and Corrie Harriman joins in on the action. Corrie’s War is a 16-part naval adventure series where Corrie joins the Royal Navy and must combat deadly enemies, navigate through hazardous storms, and even endure cruelty by the hands of her own crew. No one suspects that Corrie is actually a young woman-and she plans to keep it that way.

Press gang! Battle, Sweat and Glory in Nelson’s Navy! (Bulmer Press, October 2018) by author and painter Anthony Barton is the first entry in the Corrie’s War series, in which a press gang brings Corrie and her brother, James, to the warship known as Swift. Her happiness soon turns to fear as Augustus Sly, the brutal master-at-arms, orders them into the bilge hole. Corrie forms a plan, and they break out but later accused of thievery. The punishment is death from hanging. How will Corrie get out of this one?

Corrie Harriman’s dream of being in the navy turns into a nightmare where she and her brother must fight for survival from her superior officers in Press Gang!

In Enemy Ship! (Book 2), James battles a French captain aboard a hostile ship and Corrie must save him from impending doom. In Clear for Action! (Book 3), Corrie is promoted to watch officer and in charge of the warship, but encounters the enemy in her path. She must decide whether or not to engage, which could cost the lives of the men, women, and children on the frigate. Outgunned, Swift has a skirmish with the French warship Tonnerre in Under Fire! (Book 4), but can Corrie’s plan save her crew from defeat?

Join Corrie in her wildest adventure to date: Storm Fury!