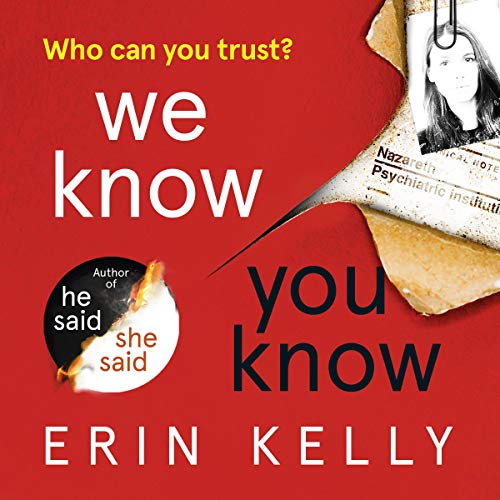 We Know You Know

We Know You Know

The gripping new psychological suspense novel from the best-selling author of breakout hit He Said/She Said.

This novel was previously published as Stone Mothers.

Gripping, terrifying and moving back through time to reveal twists you'll never see coming, We Know You Know delivers shocks and suspense from a master of thriller writing.

'I heard the swish of falling paper. I grazed my knuckles retrieving a beige folder, its grubby white ribbon loose. Looping doctor's handwriting. Addresses. Dates. Names. Photographs! I had found the patients whose notes would bring the past back to life.'

A lifetime ago, a patient escaped Nazareth mental asylum. They covered their tracks carefully. Or so they thought.

Thirty years ago, Marianne Smy committed a crime then fled from her home to leave the past behind. Or so she thought.

Now, Marianne has been forced to return. Nazareth asylum has been converted to luxury flats, but its terrible hold on her is still strong. A successful academic, a loving mother and a loyal wife, she fears her secret being revealed and her world shattering.

She is right to be scared.

Praise for He Said/She Said: “I'm calling it: THIS is the book I wish I'd written.” (Clare Mackintosh, author of Let Me Lie)

“It's SO good...I was carrying it around the house I was so gripped.” (Sarah Perry, author of The Essex Serpent)

“Kelly is a master at drip-feeding us the details, keeping us guessing about the truth, and the many shades of grey it contains, right until the end.” (Observer)