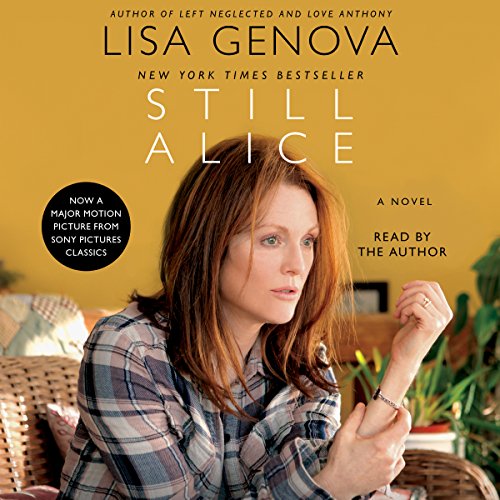 The heart-wrenching tale of 50-year-old Alice Howland and her early onset Alzheimer's diagnosis is narrated eloquently by author Lisa Genova. Alice, a successful linguistics professor at Harvard, is married to John, an equally esteemed Harvard professor, and together they have three grown children. Her biggest worry in life is her youngest daughter's move to L.A. to pursue acting  until Alice starts forgetting things. It begins innocuously enough: misplacing her BlackBerry, missing unimportant appointments on her to-do list, searching her mind for tip-of-the-tongue phrases. But when she goes on her familiar daily run through Cambridge, and becomes disoriented just one mile from home, Alice knows something is terribly wrong.

A battery of tests and multiple doctor visits later, her worst nightmare is confirmed  she is in the first stages of early onset Alzheimer's disease. Told from Alice's perspective, it's a frighteningly keen insight to the slow deterioration of a debilitating disease. Every nuance of pain, frustration, fear, and sorrow is captured in Genova's voice and she expertly utilizes the pregnant pause, and short, choppy sentences to convey the confusion and pain of Howland's thoughts during testing and diagnosis.

Genova's slight Boston accent lends authenticity to the story, and she doesn't oversell the emotion behind the words. Her transitions between character dialogue are smooth and subtle, but she so embodies the main character Alice, it's hard to remember that it is Genova, and not Howland herself, telling her story. Knowing its being read exactly as it was intended by the author creates an even stronger connection to the work. Equally present is the devastating effect this illness has on Alice's husband, children, and coworkers. And while there's obviously no happy ending in sight, Genova still manages to paint a story of hope, reminding listeners that even in the midst of great loss and suffering, love remains. Colleen Oakley

What if every memory you've ever had will be erased from your mind, and you have no choice but to carry on...powerless to stop it?

Alice Howland is proud of the life she worked so hard to build. At 50 years old, she's a cognitive psychology professor at Harvard and a world-renowned expert in linguistics with a successful husband and three grown children. When she begins to grow disoriented and forgetful, a tragic diagnosis changes her life - and her relationship with her family and the world - forever.

At once beautiful and terrifying, this extraordinary debut novel by Lisa Genova is a moving and vivid depiction of life with early-onset Alzheimer's Disease that is as compelling as A Beautiful Mind and as unforgettable as Ordinary People.

"After I read Still Alice, I wanted to stand up and tell a train full of strangers, 'You have to get this book.'" ( Boston Globe)
"With grace and compassion, Lisa Genova writes about the enormous white emptiness created by Alzheimer's." ( The Improper Bostonian)
"A masterpiece that will touch lives in ways none of us can even imagine." ( Alzheimer's Daily News)

Please pay for a professional Reader

Monotone. The author is a good writer but a horrible reader. I don't understand why a professional reader was not used. The flat and emotionless voice made the book unbearable to listen to at times. I wish that I had purchased this book in book form and not audio. It's a struggle to stay with that flat voice reading this compelling story.

Imagine a court reporter reading back testimony with no emotion or emphasis. I WISH the author had been able to narrate Still Alice that well. l have had this title for a while. I am currently spending a lot of time in the car, so I decided to listen to it again, having forgotten how painful Lisa Genova's performance was the first time I slogged through it. It hasn't improved with time. In fact, it might be worse this time, because I know all the basic plot points and am focusing more on the details. I came back to Audible to see if, given the success of the book and the fact that it was made into a movie, they re-recorded the book with someone (anyone!) better suited to the task. They didn't, and so I'm here to warn you that this is a good book about an emotional subject that sounds like it's narrated by a robot.

Very poor narrator, I returned it

What would have made Still Alice better?

What could Lisa Genova have done to make this a more enjoyable book for you?

Have it read by somebody else

Thanks Audible for allowing us to return a book!

An author, NOT a narrator

The story was pretty good, but she is simply not a narrator. This would have been exponentially better if it had been read by an actual professional narrator or actor. The content was good, and I found myself distracted by the poor narration.

Authors-please stop narrating your own books!

Would you consider the audio edition of Still Alice to be better than the print version?

No-This might be the third book that I am having a problem finishing because the actual author is narrating. Please, unless you're Amy Poehler or an actual entertainer, please allow Audible to hire a trained reader.

This horrible disease runs in my family and I am always interested to read about different experiences.

I have been listening to books from Audible for over 12 years and have rarely been disappointed with the readers. This is actually the first time I have written a review because I am compelled to beg Audible to stop having the author narrate their own books. When you are used to exceptional readers, these narrators fall short and almost always ruin the experience!

Made for TV Movie ..

I'm ambivalent about this book. The author did a pretty good job of capturing 'key' points about what folks experience with Early Onset Alzheimers - so if you prefer a narrative over dry descriptions of what faces Alzheimer sufferers and their families - this book is for you. Yet the book misses the true challenges that face the rest of us. I titled my review "Made for TV Movie" because that's what it appears to be. Well written but superficial.

My complaint is that the author apparently had a 'check list' of points she wanted to cover, so one-by-one she checked them off. Most problems popped up long enough for the author to tell us about them - and then she moved on. The problem rarely occurred in a significant way again. For someone who supposedly suffered from significant language problems, Alice always managed to be fully articulate when necessary. Yeah, right.

Despite Alice's dark plans at one point (another check mark), she didn't really seem to mind having Alzheimer's. Sure it got in the way - but she was not upset for long about anything. There was no fear, no distrust, no chronic anxiety ... it was just a frustrating experience that could be handled and planned for.

I speak from some experience, since my own wife, Barbara has early onset Alzheimer's, although not the fast-acting genetic variety. Comparing Alice to Barbara: Barbara is three years older than Alice. She had symptoms that go back at least six years before diagnosis. Her first mention to her physician about the problems were passed over the first time she made them. It was only a year later that they took us seriously when I accompanied her to a visit, and nearly a year after that before she was diagnosed; ironically the same week as Alice.

Alice has such a perfect life. Professionally successful. Great doctors. Lightening fast diagnosis. Apparently no financial issues. No crazy legal issues. Grown children. (Barbara's were in high school). Everything was manageable except for that pesky disease and her ambitious husband. Good grief, she even got to see and know her first grandchild.

So nice try, Lisa. I hope you get your TV movie deal.

Flat and monotone narration by an inappropriately juvenile, flip, teenage sounding voice. Really wish the author had not done the narration. The story is technical and told from a cold observing distance. It is a perfect example of being talked at about the story rather than seeing it unfold and develop through plot and character driven detail. The frequent use of the word "she" (almost every sentence starts with she) nearly drove me over the edge. To me the book just did not ring true. I know great numbers of listeners loved the book, I am not one of them. A much better look at the experience of Alzheimer's Disease through fiction is the book Elizabeth is Missing.

This is my first review after 7 years of membership listening to over 200 books. I am 64 and in good health, but this book raised profound questions for me about mortality, how to leave your family and friends when the time comes, and what to do when the time comes. I laughed and cried throughout, but now I have to figure out what I do when (if) something like this happens to me. I can't remember when a book affected me so profoundly. There are not enought stars in the rating -- it deserves 7.

Please have professional reader perform this!

i returned this book. Decent story but I found that Genova, like many authors, doesn't have the gift that brings audible books to the next level. Makes me wish I could have read the paper copy so that the inflection and "voice" of characters would have been more appropriate and rounded. Genova is fast, flat and grates on the ear. This character is a bit hard to like because of her sense of superior intelligence and self importance. Her husband is a one dimensional selfish brat and there seems to be no real relationship between her and any of her family members so she loses little when she starts to forget. She claims her co-workers are family but when she isn't proving herself superior to all of them and their wives, she is again singing the praises of Brahmin elite in Harvard Yard. No real connection except to booster her prestige. Also, you don't need to put the word Harvard on every page. We get it! She is elite among elite, top of the ladder, world class- it gets beat to DEATH! The mere fact that it takes a progressive, terminal disease to make the reader care about her, confirms how objectionable her ego makes this character. While I have little doubt these people exist IRL, I don't want to read about them.

The book itself was interesting enough although a little technical in places but the narration was so bad that I was tempted to give up on the book altogether. The author's narration was flat and stilted making the reading of her dialogue especially jarring. Her voice was also too young sounding to be believable as a 50 year old woman. Some authors should simply not narrate their own work.

Maybe a great novel... maybe a real good movie... but Lisa Genova is the worst audio-book-speaker I've heard before. So emotionless that I really don't know if I can make it through the whole audiobook without falling asleep every 10 Minutes. Sorry, a great story in a really worse audiobook.

A good read for women

The story truly captures the feelings and emotions anyone could encounter they themselves were to ever get diagnosed with such an unforgiving disease. Your memories and intelligence are your biggest treasures.

The story is touching and interesting, especially when the author describes the effects of Alzheimer's disease on an otherwise healthy and respected professional. Read by the author but as good as any professional speaker.