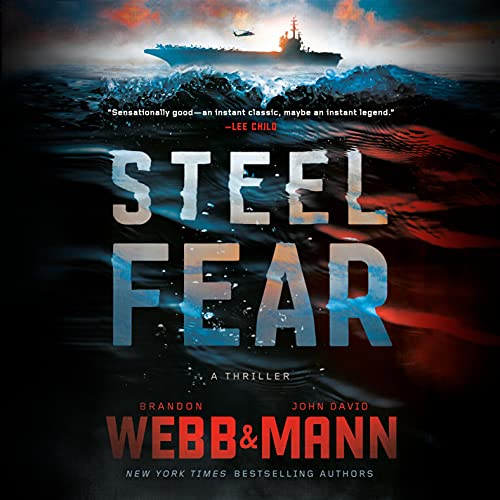 An aircraft carrier adrift with a crew the size of a small town. A killer in their midst. And the disgraced Navy SEAL who must track him down . . . The high-octane debut thriller from New York Times bestselling writing team Webb & Mann—combat-decorated Navy SEAL Brandon Webb and award-winning author John David Mann.

The moment Navy SEAL sniper Finn sets foot on the USS Abraham Lincolnto hitch a ride home from the Persian Gulf, it’s clear something is deeply wrong. Leadership is weak. Morale is low. And when crew members start disappearing one by one, what at first seems like a random string of suicides soon reveals something far more sinister: There’s a serial killer on board. Suspicion falls on Finn, the newcomer to the ship. After all, he’s being sent home in disgrace, recalled from the field under the dark cloud of a mission gone horribly wrong. He’s also a lone wolf, haunted by gaps in his memory and the elusive sense that something he missed may have contributed to civilian deaths on his last assignment. Finding the killer offers a chance at redemption . . . if he can stay alive long enough to prove it isn’t him.

“Sensationally good — an instant classic, maybe an instant legend. Steel Fear takes all the strengths of a traditional thriller and makes them as modern as tomorrow.” (Number one New York Times best-selling author Lee Child)

“An absolutely amazing thriller! Steel Fear comes in hot and never slows down. Exciting, action-packed, and twisty from stem to stern. This will be one of the hottest books of the summer!” (Number one New York Times best-selling author Brad Thor)

“Steel Fear is deadly good, a five-star scorcher from first page to last. The enigmatic and mysterious Finn is the next big thriller superstar.” (Number one New York Times best-selling author Robert Crais)

A nice whodunnit. I probably would have enjoyed it more if I hadn't spent several years on Aircraft carriers. Handlers wear blue jerseys, not green. squadron and ship aircraft maintenance and ordinance are different entities. Officers and Enlisted call each other "Lieutenant and Master Chief ", not "Robbie and Scotty". If the ship had sailed from San Diego, they would have crossed the line before they got to the Gulf. The list goes on. Yeah...I'm nitpicking, but if you want to write a more believable novel, do better research first.

It’s been a long time since I’ve listen to book that kept me on the edge! Great book couldn’t stop listening.

Chief Finn, a Navy Seal with a troubled past, is sent home on a nuclear carrier under unknown circumstances. Shipboard, he finds himself in the middle of poor leadership, bad morale, and mysterious accidents, possibly even murders.

Just another troubled Navy Seal book? No, not at all! Webb and Mann have developed a unique character with interesting talents and character. When I say unique, I mean different from the normal military heroes - he's a believable character rather than one who performs superhuman feats while being constantly wounded throughout a story. Moreover, Finn is an individualist more like a Jack Reacher but yet much different.

Rather than fighting the typical terrorists or bad state actors, Finn evolves into an investigator of the shipboard deaths. The authors also manage to enrich the story with a variety of interesting characters, both good and bad.

I listened to the audiobook version performed by Jonathan McClain. His interpretation of Finn and the various characters really adds to the story. I hope McClain continues as the performer if the authors spin a series around Chief Finn X.

Speaking of a series, I hope Webb and Mann do just that. While the book ended with a satisfying conclusion to the primary story, a great backstory is yet to be pursued. Moreover, Finn is simply a fascinating character. Read or listen to this book. You won't be disappointed.

This was one of the best books i have listened to. The writing is outstanding. Absolutely loved it and can't wait for the next one.

What a great book. one of those books you take a chance on and fall in love with. The narrator was superb, the story was captivating and will hold your attention from the very beginning to the very end. The character descriptions, the descriptions of the ship... the authors put you right there in the middle of everything.

I hope to see more of their work in the future. they delivered in this book what Tom Clancy did in his first book... I expect lots of great things to come.

Kept me involved and guessing

Looking forward to a series based on the lead. Well worth the time and credit.

Overall its OK, not sure why this consider a Military Thriller Suspense. Its really just a murder mystery set on an Aircraft carrier and honestly kind of boring because of it.

Not sure I would recommend

Slow on all counts

slow narration and even slower plot development. after 3 hours I had to give up.

Falsely classified as a mystery and suspenseful. struggled to finish this book I most likely will return

Perfect escape that grabbed me and kept me. Infliction from narrator was fantastic and appreciated.