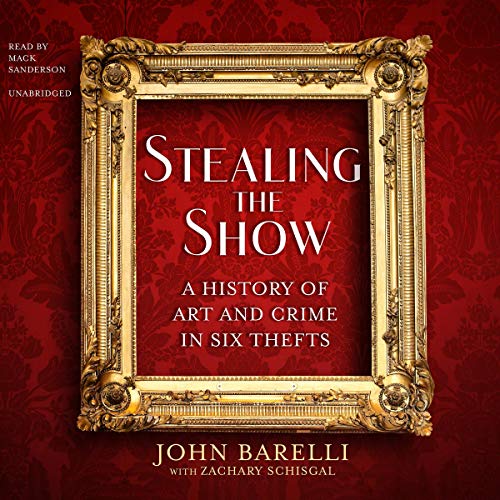 When he retired as the chief security officer of New York City's Metropolitan Museum of Art, John Barelli had spent the better part of 40 years responsible not only for one of the richest treasure troves on the planet, but the museum's staff, the millions of visitors, as well as American presidents, royalty, and heads of state from around the world.

For the first time, John Barelli shares his experiences of the crimes that occurred on his watch, the investigations that captured thieves and recovered artwork, the lessons he learned and shared with law enforcement professionals in the United States and abroad, the accidents and near misses, and a few mysteries that were sadly never solved. He takes listeners behind the scenes, introduces curators and administrators, walks the empty corridors after hours, and shares what it's like to get the call that an ancient masterpiece has gone missing.

The Metropolitan Museum covers 12 acres in the heart of Manhattan and is filled with 5,000 years of work by history's great artists known and unknown: Goya, da Vinci, Rembrandt, Warhol, Pollack, Egyptian mummies, Babylonian treasures, Colonial crafts, and Greek vases. Over the years, John helped make the museum the state-of-the-art facility it is today and created a legacy in art security for decades to come.

Focusing on six thefts but filled with countless stories that span the late 1970s through the 21st century, John opens the files on thefts, showing how museum personnel along with local and sometimes federal agents opened investigations and more often than not caught the thief. But of ultimate importance was the recovery of the artwork, including Celtic and Egyptian gold, French tapestries, Greek sculpture, and more. At the heart of this audiobook there will always be art - those who love it and those who take it, two groups of people that are far from mutually exclusive.

"With his deep, authoritative voice, Mack Sanderson is the perfect narrator for this memoir by the former chief security officer of New York's Metropolitan Museum of Art. He is so believable that at times listeners may believe they're hearing the author himself as he recounts his experiences on the job.... Listeners will learn much about the psychology of the art thief - whether art lover, opportunist, or professional." (AudioFile magazine)

The incredibly beautiful voice made the book so much more interesting. It was wonderful. Loved it!

A light read on the experiences of the Metropolitan Museum’s Security chief. Not really about the history of art or art crime. More about his own experiences dealing with damaged art, stolen art, visiting heads of state, and other security concerns at the Met. Well enough in its way, but not what the title suggests it to be. It’s not a book I would listen to a second time.

Wonderful insight into the world of high stakes security and invaluable art collections. Loved it!

Compelling true story of art thefts solved and unsolved, and behind-the-scenes accounts of the Met gala, Alexander McQueen and other blockbuster shows at the Met. Good read and terrific narration.

Art theft; the subject of clever books and marvelous movies is no less fascinating when told by the man who acted as the chief nemesis of the ingenious crooks and desperate insiders who would steal the priceless treasures of the Metropolitan Museum.

With one chapter titled, “So You Want to be an Art Thief?”, the book is light enough to be accessible but it’s not lightweight. Mr. Barelli is a serious professional and he describes in masterful detail the real events behind the Global headlines as well as thefts and losses never reported. I enjoyed the stories of the priceless artifacts for which Mr. Barelli’s team was responsible, but the scenes I found most moving were his descriptions of several of the Met’s most famous visitors whose safety he guarded with exquisite care.

The insights are as thoughtful as the tales are entertaining and Stealing the Show is an engaging pleasure but the finishing touch that makes this magic is the narrator. Mack Sanderson is mesmerizing; with a voice that captures both the wit and the gravitas of the story, he turns this wonderful set of stories an objet d’art. I’m a voracious reader and have never thought that listening to a narrator could match the joy of reading a great book but I think in this case, I’d recommend the audio version of Stealing the Show.