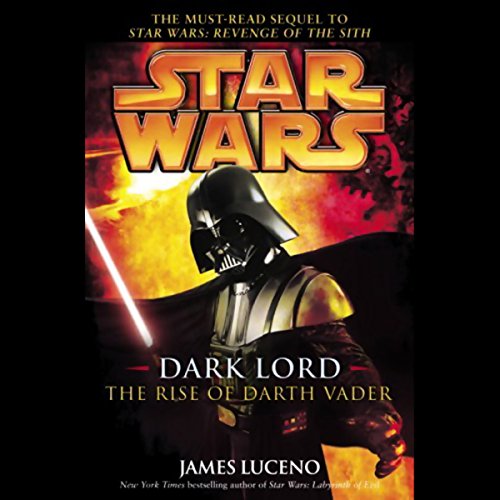 Throughout the galaxy, it was believed that Jedi Knight Anakin Skywalker, the Chosen One, had died on Coruscant during the siege of the Jedi Temple. And, to some extent, that was true. Anakin was dead.

From the site of Anakin Skywalker's last stand, on the molten surface of the planet Mustafar, where he sought to destroy his friend and former master, Obi-Wan Kenobi, a fearsome specter in black has risen. Once the most powerful Knight ever known to the Jedi Order, he is now a disciple of the dark side, a lord of the dreaded Sith, and the avenging right hand of the galaxy's ruthless new Emperor. Seduced, deranged, and destroyed by the machinations of the Dark Lord Sidious, Anakin Skywalker is dead, and Darth Vader lives.

Word of the events that created him, the Jedi Council's failed mutiny against Supreme Chancellor Palpatine, the self-crowned Emperor's retaliatory command to exterminate the Jedi Order, and Anakin's massacre of his comrades and Masters in the Jedi Temple, has yet to reach all quarters. On the Outer Rim world of Murkhana, Jedi Masters Roan Shryne and Bol Chatak and Padawan Olee Starstone are leading a charge on a Separatist stronghold, unaware that the tide, red with Jedi blood, has turned suddenly against them.

For the handful of scattered Jedi, survival is imperative if the light side of the Force is to be protected and the galaxy somehow, someday reclaimed. Yet more important still is the well-being of the twin infants, Leia and Luke Skywalker, the children of Anakin and his doomed bride, Padme Amidala. Separated after Padme's death, they must be made safe at all costs, lest the hope they represent for the future be turned to horror by the new Sith regime, and the unspeakable power of the dark side.

Why abridge this story

No. It's in abridged form. I didn't see that before I hit the buy button. Why would I recommend an incomplete book? Why did Luceno agree to abridge this book? It ruins the story.

It was an interesting look at at Vader's personal world, but not near enough. I kept wanting to delve deeper into what makes him tick, but we'd just scratch the surface. I like Luceno and his character point of view stories. I'm looking forward to Tarkin. Also, I'd like a longer shot of each character's history instead of a short period. Plagueis was good because it spanned so much time, and the reader got a broader view of the characters life and motives.

Solid, wish it was Unabridged though.

Would you listen to Star Wars: Dark Lord: The Rise of Darth Vader again? Why?

Yes. Luceno didn't disappoint. Would like the unabridged version.

What was one of the most memorable moments of Star Wars: Dark Lord: The Rise of Darth Vader?

The best part of the book was the inner dialogue of Vader. I never realized how much pain he was going through inside the suit.

Would you listen to Star Wars again? Why?

I have listened to I think 80% of all the available SW Audiobooks and this is my favorite book. I don't know exactly what it is, but I just LOVE it! I got this audiobook when it came out in 2005 and I have listened to it at least a dozen times since then. Whether it was at college, commuting/road trip, or at work this book is just so entertaining. It has everything I love about the movies and what I love about the clone war. The time between Episode 3 and 4 is my favorite time period in Star Wars. I just love this book!

Have you listened to any of Jonathan Davis’s other performances before? How does this one compare?

When I first. Heard this I couldn't imagine anyone else doing Star Wars books. I love Marc Thompson but Jonathan Davis is fantastic.

As one of the premier authors of the Star Wars series, James Luceno is known for the depth of his insights and the skill of his storytelling. In "Dark Lord" he demonstrates his skills at their finest. The story brings the Star Wars fan into new revelations about the development of critical characters and the abridged story moves smoothly, holding the listeners interest throughout. The production value of the story is a treat, providing plenty of "extras" to enhance the listeners enjoyment of the audio and nothing to get in the way.

"Dark Lord" is a true triumph in the Star Wars pantheon.

The story needed to be told

For all the star wars fans who were left with an empty feeling after Revenge of the Sith. Dark Lord gives you an inside look at Darth Vader! His Feeling his towards his new self and the jedi. Includes sound effects, a must for all star wars fans.

I have read numerous Star Wars novels and this was my first audible book. I enjoyed it very much, it was almost like watching a movie in my head. The content and storyline kept me wanting for more every minute. I hope they continue this storyline with more novels because I would buy them in a heartbeat. Wonderful Narration!

I downloaded this book as a casual Star Wars fan simply wanting to be entertained while I exercised. I thought the story line sounded pretty interesting and this book certainly delivered in that respect. For me, the sound effects and "radio-play" feel of the reading worked. It helped me escape and lose myself in the SW universe.

I would recommend this for someone who simply wants to be entertained, pure and simple. No deep thinking necessary. Just sit back and enjoy it.

By the way, it seriously whetted my appetite for the next book in the series, if there is to be one. Something to fill the gap between the end of Dark Lord and the beginning of A New Hope would be great.

Only for the hardcore Star Wars fan.

All of these tales set in the Star Wars universe follow the same format. They share the familiar sound effects, and the classic John Williams music. Yet these classic elements are not near enough to make up for the lack of story. This book is sold as Darth Vadar's journey after Episode III, yet Vadar is barely explored during the story, the narriative moving with a few Jedis on the run. At least the reader is decent. So unless you're a big fan of the Lucasverse save your bucks!

This should have been unabridged.

I am really enjoying Jonathan Davis's narration of the Star Wars galaxy. This should have been included in the official Star Wars Cannon.

A great addition back to back with episode 3, memorable characters and a good characterisation of young Vader. although rather sorry it brings a lot of action and nice moments with most major characters to the table.

Not as good as Revenge of the Sith

After reading the novel to the movie, I kept my expectations somewhat high and I admit, I got a bit disappointed.

Don't get me wrong, reading the scenes with Vader was absolutely delightful. Especially when he finally got to show off his stenght later in the story.
(although it was a bit bothersome at first, how weak and clumsy Legends Vader was at the beginning, but at least in that regard we can thank the new Canon for making him even more badass).

The thing that bothers me about the story is: how rarely Vader shows up.
The majority of the book, we follow the story of some random, boring group of Jedi.

they met their end and Vader finally killed them off, or showed them just how unwise it is to mess with him.

The rather boring Jedi plot kinda ruined the book for me. But Vader scenes made it at least somewhat worth the money.

Voiced by my favorite voice actor Jonathan Davis, I enjoyed the listening itself as much as the story. I love how the author pictures the struggle of Lord Vader with his new armor, equally a prison and enhancement of his body. At some points into the story I really didn't know how it will end, even though I knew because of watching the movies that Lord Vader will of course survive. It's a thrilling story with many epic moments, and even some moments of Irony which made me laugh out loud. I recommend this book strongly, especially for fans of Lord Vader like myself.

confusing story, nothing interesting happening, vader is boringly portrayed, the jedi are generic and have no meaning of their own.