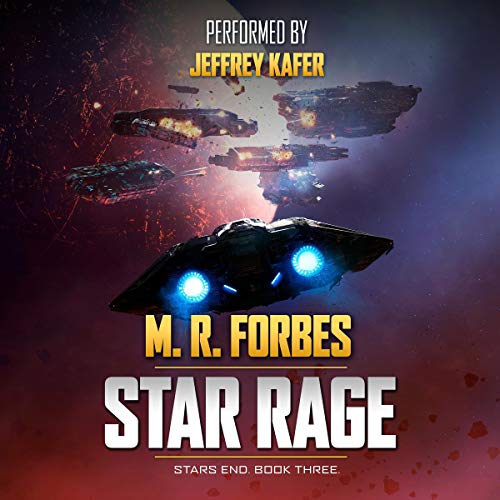 Events on Naraka leave Grayson exhausted but hopeful. The invaders may not be as unstoppable as he thought, and the entire weight of the Alliance is about to enter the fray. Rejoining the Navy should bring closure to his ordeal and allow him to return to his life as a pilot.

Except his mesh partner is still stranded on a freezing planet.

Except his past refuses to let go of his future.

Except the man he trusted to rally the defenses may have sabotaged them instead.

Humankind is on the verge of extinction, and if Grayson is going to stop it, he’ll have to outmaneuver opposition from every side of the equation.

Otherwise, there will be nothing left.

You can''t beat Forbes for a great story

Forbes is so excellent at creating both characters that you like and stories that keep you spellbound that you can't wait for the nezt installation, and this book is no exception!

This series is getting better and better, keep it up, and M.R. Kafer rocked it also

This series has been a non-stop action packed ride so far, 3 books down and still no sign of it slowing down. With the stakes higher than ever and the uneasy and tumultuous alliance between two warring Countries still dangling on the balance, I can't wait to see how this resolved itself in the final book. Twists and turns aplenty, I'm sure the last book will blow us all away

The former soldier in me had to cringe and just how realistic some parts of this story were, mostly the bureaucracy. I never thought I could look so poorly at the AoP, yet here I am, waving my own commune flag. Its book 3 and Stone has finally made it home. The expectations the prior two stories had set up for me, were totally shattered, and I was left gripped at how this story built back up. Once again new characters are never glossed over, keeping the mental painting of what is being told to us very vivid, expansion of what we know about the banshees is splendid, building a fantastic Sci-fi villain. Book three will take you through excitement, hope, anger, let down and leave you hanging on tight to yet another M.R. Forbes cliffhanger end. If you need a great Sci-fi series to start, this is the one! Pros: Memorable characters Deep vivid world total lack of slow down, no filler cons: not enough Rozik this time! 1/100,000,000,000th of a star removed.

Once again another great story. I didn’t see that coming. Mr. Forbes is getting sneaky.

The Banshees are coming!

Star Rage is a great continuation of the Stars End series by writer M.R. Forbes. The great narration by Jeffrey Kafer continues to bring the story to life. Focusing on Commander Stone’s attempt to get the AoP to fight the Banshees and save the survivors of the initial attack. We see the cunning of the alien foes and the brilliant steps taken to challenge a technologically superior foe. It will take an indomitable will to save humanity. Unfortunately for the Banshees humanity has Odin Longknife. Star Rage is a great addition to the series and I highly recommend it.