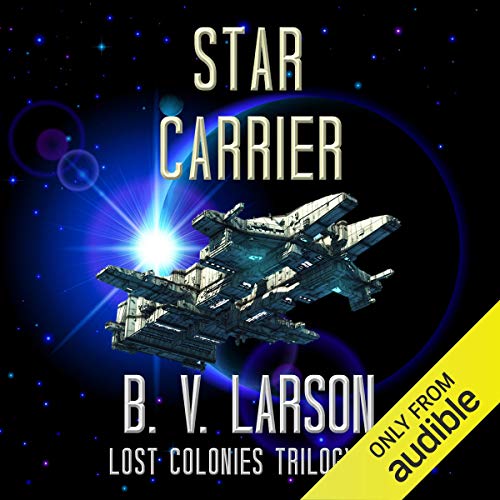 The greatest warships ever constructed in known space rise up one by one, soon dominating our skies. They strike fear into the hearts of every citizen and rebel colonist alike. Captain William Sparhawk, the very man who convinced the secretive Council to build this terrifying fleet, now has doubts about the project. What is their exact mission? How could anyone have built these huge ships so quickly? And, most puzzling of all, what's happening out at the isolated laboratory complex on Phobos, Mars' lopsided moon?

Learn the stunning truth in Star Carrier, the final book of the Lost Colonies Trilogy.

Super ending rather than bogging down!

Edoardo Ballerini give Sparhawk his proper upper-class perfect poise and pronunciation, while also voicing his grand-dame Aunt, political father, the Betas, the Stroge, and everyone in between.

Well done all around.

B. V. Delivers yet again!

Bottom line: If you enjoy science fiction and space you may really like this trilogy and this book.

I was thrilled when this was released as when I finished book 2, I was impatient for the story to continue. I went as far as to contact Audible customer service to ask about it's availability. B. V. is among a small group of my very favorite authors and this story from beginning to possible ending is in my opinion very good... The way this book ends, it seems to take the word trilogy seriously, however, there certainly is a place for the story to continue so perhaps we'll see.

The last 3 hours of the book were the best of the whole book.

What does Edoardo Ballerini bring to the story that you wouldn’t experience if you just read the book?

Of all the space books I've read Edoardo Ballerini is by far my favorite narrator.

Without giving to much of the plot, I was disappointed one of my favorite characters wasn't in most of the book.

What an excellent series. Never predictable and always keeping you guessing. Read this series! This last book was a little long but the plot twists kept you going. Narrator was skilled and at first I didn't like his voice but it grew on me throughout the series.

StarHawk protector of the realms returns

I'd probably listen to this series again so yes it's worth it to listen to.

It is a good adventure with interesting futuristic cultural bio-mechanical thinking. A world within a world.

A Great series. I couldn’t stop listening, the story was well done and held my attention throughout.

Interesting, well written and enjoyable. As expected by Larson. Not the best in the trilogy.

All three books are incredible I love you the vision that is painted by Larson. The characters are great good ending, hoping they’ll be more

Good end to a great story

I really enjoyed this trilogy. The 3rd part was exciting and brought the story to a food end, it hardly leaves anything open that would warrant a 4th book.