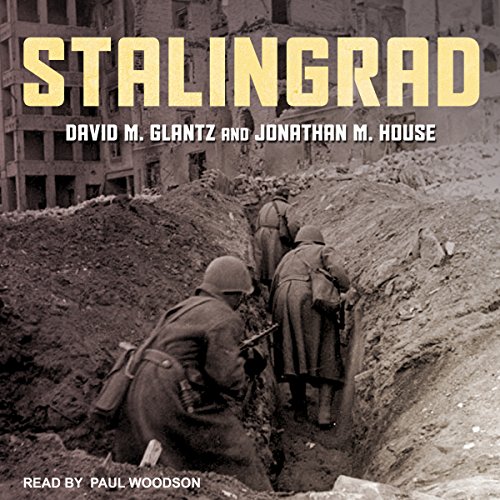 Tantor Audio presents the complete audio version of the long-awaited one-volume campaign history from the leading experts of the decisive clash of Nazi and Soviet forces at Stalingrad.

Stalingrad is an abridged edition of the five-volume Stalingrad Trilogy.

An epic story which is described in rich detail. Strongly recommend for those seeking to obtain a strong operational level understanding of the Stalingrad battle. Especially useful for those interested in wargaming the conflict.
The narration held my attention.
Glantz does not disappoint but, like all of his works, accurate period maps are a necessary companion.

I have read many books on this historic event and this one left cold. Not the fault of the nattortor. He only read what was written. Sympathies laid with the Germans and, once again, the Russians didn't win, the Germans lost. Worst of all was the authors treatment of the Russian women who defended Stalingrad in the early days. A completely chauvinist attitude of how completely "ineffective " they were. Russian history tells a much different tale Many Russian generals wrote how brave these women were, defending the city at the cost of almost certain death. What a complete and total waste of a credit. Could not and will not finish it. A real shame Audible would not allow me to exchange it. Fellow listeners please don't waste your time.

very in depth. hard to keep track of units and movements without any visual aids lile maps and military graphics.

I very much appreciate the narrator. His effort was monumental! Constantly having to repeat each unit's number and designation was a chore. But these books are not suited to being read. There is too much unit detail and geography used and the listener cannot absorb or understand all the information and make any sense of the story.
Not worth the time or money.

I assume that when this book was written, it was meant to be read rather than listened to.

amazing research and presentation of subject material. finally a David Glantz book on audible. only took 2 years of me begging for it.. Hehe. best money spent in a decade. let's hope we see plenty more David Glatz and similar caliber WW2 books coming to audible in the future.

An incredible story made mind-numbingly tedious

What would have made Stalingrad better?

This book was tedious beyond description. This is a made-up but accurate example of quite nearly every single paragraph: "110th Rifle Unit of Zikov's 2nd Army Division surrounded the breakout of the Romanian 4th Infantry and the Hungarian 43rd Division, closing the pincers around the salient on the Don bridgehead established by 15th Corps of the 6th Army suppliemented by the diversion of the remnants of 3rd Tank Corps to 6th Army's flanks. Heavy fighting ensued. Across the Don, Zhukov mustered the 112th Rifles of the 3rd Mechanized Cavalry of 2nd Army, which had been low on rations and ammunition since the advance of 3rd Army on the Operation Neptune breakout of November 2nd, delayed from November 1 because of the failure of the tanker trucks of 32nd Supply Corps to navigate the cratered road from Company Headquarters". Hours and hours and hours of this. Kudos to the narrator for keeping me engaged as long as he did. I eventually decided to give up before finishing. I did not intend it as a bedtime story but I could not stay awak when I listened to the droning on the movement of army divisions. An utterly pointless rehashing of the bureuacratic minutiae of one history's largest, bloodiest, dramatic, and most momentous battles and one that decided the fate of the Third Reich two years before the Western Allied invasion of Normandy. I'm exchanging this for "Enemy at the Gates".

What could David M. Glantz and Jonathan M. House have done to make this a more enjoyable book for you?

Have you listened to any of Paul Woodson’s other performances before? How does this one compare?

Don't know, but he is an excellent narrator for historical nonfiction in spite of the material.

Anger, sadness, disappoinment. At the book.

I listened to this but would buy an electronic edition that had computer driven maps of how ALL these units moved about. How hard could that be guys?

Objective look at the Eastern Front

Forget Enemy at the Gates and Cold War propaganda. The Second World War was a very complex, very brutal time and this books illustrates why. Instead of the advanced, sophisticated Nazi technology getting overwhelmed by a horde of soldiers, you see two armies more or less equal in many respects.

This is a VERY academic account of the campaigns of 1942-43, broken down to the regiment/battalion level of who fought where and when. Has virtually no individual stories, just accounting of troop movements, dates, and casualties.

Difficult to visualize without a map. I wonder, if some of the places have changed their names.