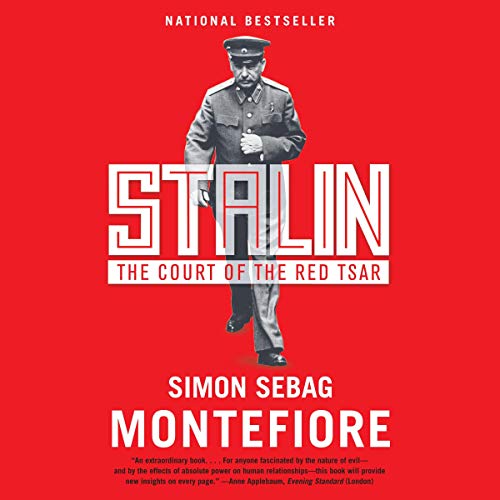 Fifty years after his death, Stalin remains a figure of powerful and dark fascination. The almost unfathomable scale of his crimes - as many as 20 million Soviets died in his purges and infamous Gulag - has given him the lasting distinction as a personification of evil in the 20th century. But though the facts of Stalin’s reign are well known, this remarkable biography reveals a Stalin we have never seen before as it illuminates the vast foundation - human, psychological and physical - that supported and encouraged him, the men and women who did his bidding, lived in fear of him and, more often than not, were betrayed by him.

In a seamless meshing of exhaustive research, brilliant synthesis and narrative élan, Simon Sebag Montefiore chronicles the life and lives of Stalin’s court from the time of his acclamation as “leader” in 1929, five years after Lenin’s death, until his own death in 1953 at the age of 73. Through the lens of personality - Stalin’s as well as those of his most notorious henchmen, Molotov, Beria and Yezhov among them - the author sheds new light on the oligarchy that attempted to create a new world by exterminating the old. He gives us the details of their quotidian and monstrous lives: Stalin’s favorites in music, movies, literature (Hemingway, The Forsyte Saga and The Last of the Mohicans were at the top of his list), food and history (he took Ivan the Terrible as his role model and swore by Lenin’s dictum “a revolution without firing squads is meaningless”). We see him among his courtiers, his informal but deadly game of power played out at dinners and parties at Black Sea villas and in the apartments of the Kremlin. We see the debauchery, paranoia, and cravenness that ruled the lives of Stalin’s inner court, and we see how the dictator played them one against the other in order to hone the awful efficiency of his killing machine.

With stunning attention to detail, Montefiore documents the crimes, small and large, of all the members of Stalin’s court. And he traces the intricate and shifting web of their relationships as the relative warmth of Stalin’s rule in the early 1930s gives way to the Great Terror of the late 1930s, the upheaval of World War II (there has never been as acute an account of Stalin’s meeting at Yalta with Churchill and Roosevelt) and the horrific postwar years when he terrorized his closest associates as unrelentingly as he did the rest of his country.

Stalin: The Court of the Red Tsar gives an unprecedented understanding of Stalin’s dictatorship and, as well, a Stalin as human and complicated as he is brutal. It is a galvanizing portrait: razor-sharp, sensitive, and unforgiving.

“Terrific... Montefiore’s portrait of Stalin and his circle is a deeply researched and wonderfully readable accomplishment - scholarship as a kind of savage gossip...its sensationalism redeemed by Montefiore’s deep grounding in the facts.” (Lance Murrow, Time)

“Montefiore’s superb book offers a closer look at this personal side of Stalin and his top collaborators. Indeed, no Western writer has got as close. He trawled through newly opened (and often subsequently closed) Soviet archives, which brought some astonishing material to the surface... [A] dark and excellent book.” (Ian Buruma, New York Review of Books)

“Mr. Montefiore draws upon new archival material, unpublished memoirs and interviews with survivors of that era (including many children of Stalin’s associates and underlings) to create a harrowing portrait of life in the dictator’s inner circle. In doing so, he gives us an intimate look at Stalin himself and the culture of sadism, ruthlessness and dread that flourished around him, fueling a murderous regime that would leave tens of millions of people dead.” (Michiko Kakutani, New York Times)

Been looking for this one for a while.

A well researched book from the author who's written a few books on Stalin. His finest work, if I do say so myself.

1. The Kirov murder. The author points out evidence that Stalin and his team may have played some role in his death. He doesn't draw any conclusions but leaves the reader with much to think about
2. The book is not a biography of Stalin or a history of Stalinism. It is the story of how Stalin's inner circle developed, how they enabled the transition from oligarchy to autocracy and the role they played in facilitating Stalinist terror.
3. The role Khrushchev played in the purges

A good companion to Stephen Kotkin's biography of Stalin

Reading this book was an ordeal. Montefiore left nothing to the imagination in the massive destruction/dislocation of the many states of the Soviet Union by Joseph Stalin and his cohorts. The irony of Stalin's death was appropriate. When Stalin had a massive stroke, the doctor who could have mitigated his condition, was being interrogated as an enemy of the state. In addition, his staff were afraid to even wake him in fear of being shot. This type of problem was endemic problem with military offices arrested and/or shot, professional people arrested and/or shot. This was a massive breakdown of society vulnerable to a military invasion by Germany. I find no redeeming qualities of a government that deliberately destroyed Ukrainian farmers by taking their harvests triggering a massive famine. The crimes of Stalin and his cohorts were staggering and they were nonstop even in the face of a massive invasion, . One story that Montefiore strongly discounts is when Stalin fakes collapse after learning about Hitler's invasion. This was the type of game Stalin played to determine those supporting him. Stalin would not hesitate to destroy even when the "innocent" party was pursuing legitimate purposes. This Russia was an insane asylum run by a mad man.

Very very good. Lots of excellent and diligent research. Montifiore is also an outstanding writer. Stalin was a strange character, very crude but one of the most well read world leaders ever. He could show tender kindness one moment, and then have the same person shot for a trifle. Mintifiore paints a highly negative portrait of Khrushchev . Surely K was no saint, he was involved in Stalin’s purges, as were all the others. However Khrushchev led the Soviet Union’s Great Thaw, released nearly a million political prisoners, and outside of Beria (who was a very real grave threat to the entire inner circle) never purged his political opponents. In all, this is a great book though. Anybody with an interest in history will live it. In my top 10 list for books I’ve read this year.

This is honestly my least favorite history audiobook I have listened to yet. Most of the book is mired in Russian politics, which is fine, but with little to no illustration of most figures. Names blend together, and there are countless Russian words inserted that if you don’t know Russian or Stalinist history by heart are lost upon you. I was hoping for an enthralling and truly engaging introduction to the understanding of Stalinist Russia, and instead I got something rather dry and without much focused narrative.

I did not expect what I heard. I might have expected "engrossing", but I never would have thought that "entertaining" would be my reaction to a book about Josef Stalin. The best thing about this audiobook is an aspect which at first I was hesitant to mention. But this book humanizes Stalin in a way that I don't think I've ever read or heard before. That is not in any way a mitigation of the atrocities committed by the man, but rather an insight into the motivations and twisted emotions that lead to the evil. Not evil from some supernatural fairy tales, but evil, like good, that exists in all humanity. And here was a man more paranoid than most, with a myriad of experiences to exacerbate that paranoia, given power in the right time and right place to create a perfect storm of barbarity. Nothing can excuse it, but this book brilliantly portrays the nuts and bolts of how this heinous period of history could have happened.

The author creates a terrifically engaging story, at times scornfully dismissive of the rationalizations of the man and his regime, at other times playfully sardonic at the absurdity of the times. One point which may have been problematic for some readers/listeners, but I believe turns out to be a strength, is the liberal usage of nicknames for the title character and the various underlings. Whether referred to as "the Vozhd", or "Koba" or "Supremo" or "Generalissimo", it all works to define the numerous facets of the man.

And last, but certainly not least, the narration is fantastic. This is a rare case when a narrator doing voices nails it perfectly. The expression of Stalin is perfectly evil, or doltish, or pathetic, as is appropriate in the story. And with a British narrator, it's more than bit humorous to hear the various Soviet thugs and henchmen become increasingly cockney in their speech. 28 hours absolutely flew by with this audiobook.

Loved it. Narrator was outstanding. Book is well written and organized. Truly an intimate look into Stalin and his cronies.

well written and easy to follow. the wiit of the Author makes this topic relevant and even a joy to read/ hear.

Eloquently written and narrated - you won’t be disappointed! A remarkable achievement. So many mind-blowing scenes. Highly recommend.

I have read Lenin's biography and between the two Lenin is a more interesting character. Stalin was just plain evil, but I did enjoy learning the history.

Stalin's life makes your blood run cold. Simon Sebag Montefiore weaves an exciting tale around one of the killing machines of the 20th century, in an attractive reading by Jonathan Aris.