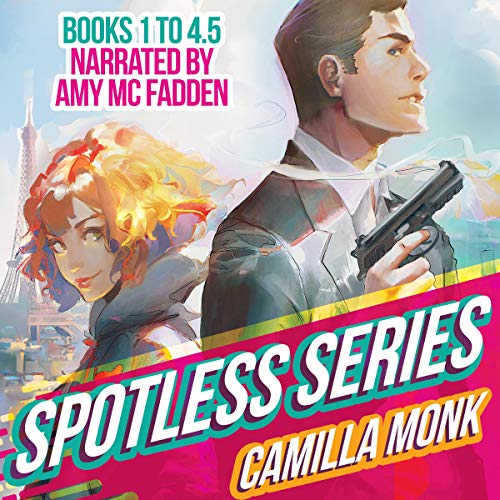 Island Chaptal - nerdy IT engineer by day, romance novel junkie by night - just walked into her messy New York apartment to find Mr. Right waiting for her. No, wait...Mr. Clean.

A gentleman professional killer with a bad case of OCD and zero tolerance for unsorted laundry, March wants the diamond her late mother stole for a sinister criminal organization. Island agrees to help him find it. Racing from Paris to Tokyo against villains who dismember first and ask questions later, the buttoned-up Island quickly develops a taste for the fast life, and for her brooding captor's impeccable manners and sexy chest hair.

But can she survive falling for a hit man?

March and Island are back, but there's a new player in the game....

Life hasn’t been quite the same for computer engineer Island Chaptal since March, an OCD-ridden professional killer, burst into her life to clean her bedroom and take her on a global chase for a legendary diamond...before he broke her heart.

Since then, Island has found solace in Alex - the perfect boyfriend - and Ruby, a software project about to revolutionize online banking security...for the worse. When Island’s boss is found dead after allegedly using Ruby to steal a vast fortune, it’s up to her to clear his name and recover the money.

From New York to Zürich, it’s going to take the return of a cleaning expert, a mini-octopus, and Island’s wits to beat Ruby. All while deciding whether to trust a man who already jilted her, or one who may have his own deadly secrets…

Sweet Raptor Jesus, this is it! Or maybe not....

Island Chaptal is enjoying a pleasant break in South Africa with reformed cleaning expert March, and she's looking forward to her long-awaited first time...until a commercial flight disintegrates over the Atlantic, killing hundreds, and Island's supervillain dad makes the news as the mastermind behind the attack. Old Lion Dries is now on the run, and he calls upon his last ally - and favorite disciple - March.

From the streets of Venice to the turquoise waters of French Polynesia, March and Island embark on a deadly race against the clock to find out what secrets lie behind Dries’s downfall. This time, however, there might just be no winning against the enigmatic Crystal Whisperer's terrifying weapon....

Under a blanket of snow, surrounded by dark woods and a frozen sea, lies an ogre's castle. There lives a little princess, trapped in the maze of her own mind.

On a battlefield where the past meets the present stand a fairy godmother and a pirate, an old ice cream man and a knight in shining clean armor....

The clock is ticking fast, and to pierce the ogre's secrets and defeat him, Island Chaptal will have to fight to remember...and stay alive.

With his nose-mounted sensor, night vision system and 30 mm chain gun, Simon Halder isn’t your average helicopter dad, and when Island, the daughter he thought he had lost, reappears after eight months of captivity, someone’s gonna have to pay.

That someone is Island’s new boyfriend: the man people just call March.

I don't usually write reviews. This book was entertaining and fun! The narrator did a fabulous job! I love the self deprecating humor by the heroine. March is the perfect hero. If you ever read silly romance novels and have since grown out of them, but yet....... down deep always wished that the premise of a romance novel could somehow be revisited, modernized, improved, with believable dialogue and (somewhat believable) danger, and just enjoyed again like once upon a youth, then I think you will love this book as much as I did. This is the only book that I have ever listened to back to back. Upon my third go thru, about half way, I realized I could put March and Island away now. This book has likable leading characters, interesting supporting characters, fantastic and imaginative story plot lines. (remember this is a novel) but the best is the tongue in cheek humor. And you will be surprised over and over again by the characters and plot twists. Plus I'll never stop loving a happily-ever-after. This is a book to just relax and enjoy the ride... It was FUN!!

this series cracked me up. Book 4 got a little dark though. I love the narrator's voice though!

This was a fun series. I enjoyed getting to know the characters and laughing at some of the shenanigans they would get up to and how they would get out of them. Super fun reading!

Whether you read this series or listen, the story is funny, engaging, well written, has great characters and so different from other books. I’m not sure if this is marketed as romance, science fiction, mystery or action, but it’s all of those things and more.

March is unique and a wonderful leading man - if not a little obsessive- and Island is just your average intelligent, short, messy and innocent leading lady.... with a quick wit.

Amy McFadden has done these books so much favor with fantastic accents.

Ill be listening to these books over again, I’m sure

I purchase this book because of Amy McFadden previous voice work, I will call this a parody of a romance novel, which I'm not really into romance novels that is. but I thoroughly enjoyed this series. Camilla Monk did a great job with this series, and seemed to be in my head predicting my reactions. Thank you both for hours of entertainment. Excellent Work!