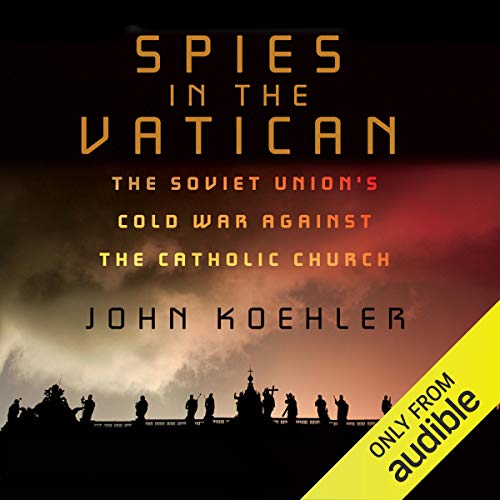 Spies in the Vatican

Spies in the Vatican

The shocking history of the Soviet Union’s espionage campaign against the Catholic Church.

Already infamous for the arbitrary, paranoid persecution of its own citizens throughout much of the 20th century, the Soviet Union - as is revealed in John Koeher’s revelatory, eye-opening exposé - also waged a vicious espionage campaign against the Catholic Church and its followers. From the persecution of local priests to an assassination order against Pope John Paul II, the KGB viewed Catholicism as a threat to stability in Eastern Europe and treated the church as an enemy of the State. Lifetime journalist and former U.S. Army Intelligence Officer John Koehler has written the definitive book on this startling history. Using never before seen documents and transcripts, including an order against the Pope that was signed by Gorbachev and nine other Politburo members, Koehler paints a vivid picture of the network of spies and double agents who were working to infiltrate the Church’s infrastructure, from the Vatican down to local parishes. But what is most impressive is the overwhelming evidence of the extreme courage of everyday believers who offered shelter and protection to the persecuted, despite the danger of their own arrest or execution.

The KGB’s efforts to purge the Soviet Union of the church’s "conspiratorial influence" would eventually backfire. The shared sense of unity that developed as a result of these attacks, compounded with the myriad grievances brought on by decades of brutal Soviet rule, would culminate in the birth of the Solidarity movement after a visit by the Pope in the late 1980s. This unprecedented chronicle of the Soviet Union’s cold war against the Catholic Church is a vital and important contribution to the works of 20th century history.

Glad to have read it

What made the experience of listening to Spies in the Vatican the most enjoyable?

The reviews for this book seemed to be quite wide-ranging--so I purchased with some trepidation. I went into it with a basic working knowledge of the subject matter and still very much enjoyed and learned from the content. So, I found it to be well worth it.

What other book might you compare Spies in the Vatican to and why?

AA-1025 Available from Tan (I believe). Further info on the deliberate Communist infiltration of the church. Also "Staziland" which gives ample insight into methods and the general ubiquitousness of the communist intellegence services.

What does Robert Blumenfeld bring to the story that you wouldn’t experience if you just read the book?

The reading is very three dimensional - he brings good emphasis and emotion to the text.

The level of cooperation with the communists is enough to make anybody cringe - and there were so many examples of this over and over again in the book.

Narrator’s in a hurry; Hard to Follow the Story

The story is very interesting but the poor reading makes it very hard to follow. The narrator seems to be in a hurry and has an unusual rhythm in reading: not pausing before adding editor’s clarification notes in the middle of a line. I was highly disappointed because I’m really interested in this topic and wanted to learn more about Soviet and Vatican interactions. Bottom line: the story was good, but the narration was so poor that I returned this audiobook to Audible after struggling through 1/3 of it.

The story is boring and confusing. The narrator is very hard to listen to. I wouldn't recommend this book.