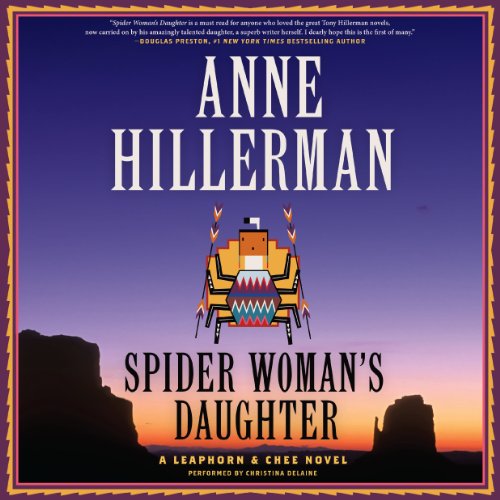 Navajo Nation Police Officer Bernadette Manualito witnesses the cold-blooded shooting of someone very close to her. With the victim fighting for his life, the entire squad and the local FBI office are hell-bent on catching the gunman. Bernie, too, wants in on the investigation, despite regulations forbidding eyewitness involvement. But that doesn't mean she's going to sit idly by, especially when her husband, Sergeant Jim Chee, is in charge of finding the shooter.

Bernie and Chee discover that a cold case involving his former boss and partner, retired Inspector Joe Leaphorn, may hold the key. Digging into the old investigation, husband and wife find themselves inching closer to the truth...and closer to a killer determined to prevent justice from taking its course.

The later books in the Jim Chee/ Joe Leaphorn Navaho series saga were lacking in comparison with his earlier works. His daughter's work (at least I assume this is his daughter) doesn't greatly reverse this slide. Officer Bernadette Manuelito is too broadly drawn to be a strong main character. the only thing we know about her for sure is that she resents her husband Jim Chee giving her directions; much less orders. This despite the fact that he is her superior officer.
The culprit in the book is obvious before you reach the halfway point. Despite this, both professional police officers and the FBI are don't perceive it until the the last hour of the audiobook. The relationship between 'Bernie' and her family never rises above obvious cliches and her sister is so entirely unsympathetic her problems so obviously self induced it wasn't possible to care much for her troubles.
The biggest problem I had with the audiobook though; was the reader. Perhaps it would not have mattered who replaced George Guidall; it wouldn't have been the same. This reader certainly wasn't up to the task. Perhaps it was Guidall who mispronounced Navaho words for the first fifteen or so works; but I doubt it. Christina Delaine might improve over time but to those who've listened to the series read by George Guidall it won't be the same.
Certain elements of the mystery were well done. The story dovetailed nicely with a previous Hillerman work and the intricate murder plot was nicely done. If you appreciated the last few Tony Hillerman Navaho cop books this one will at least match those; particularly the last two. For those of you who were fans of the earlier books in the series; save your credit.

Would you try another book from Anne Hillerman and/or Christina Delaine?

I would like to give Anne Hillerman another chance but not the narrator!

What was most disappointing about Anne Hillerman’s story?

I, like other reviewers, had the villian figured out half way through book!! Which left later part of book's supense dependent on Leaphorn's outcome & how all the involved agencies would finally figure out 'who dun it'!

Even taking into consideration my bias toward Geo Guidall as narrator of Tony Hillerman's books I absolutely could not get into Delaine's narration!! The navajo female voices all sounded the same and the males feminine. Ugh.

What character would you cut from Spider Woman's Daughter?

The sister was unredeemable as written and I was left hanging as to her outcome or how 'stooped boy' played into her character.

Prehaps I had too high of hope for this book. Those were mighty big shoes to fill and I really felt Tony himself was having difficulty filling his own shoes the last several books. They just weren't up to the first ones!

So so story, wretched narrator

Probably not - I am only half way through the book and find the narrator more distracting that anything. Story isn't that strong either and I just want to shake Bernie and tell her to quite arguing. I understand the need to "do something"

Would you ever listen to anything by Anne Hillerman again?

Maybe by Anne Hillerman but not by Christina Delaine

An extra star for keeping Leaphorn and Chee alive

Like all Tony Hillman fans I LOVE Leaphorn and Chee, I am very grateful Anne took the incredibly brave step in writing this book. No one should expect it to be on par with her father's books.I hope she continues with the series . With time and help from a good team she will develop her own following for the Chee's and their Uncle.

While the narrator is obviously very talented and did a good job with some of the Navajo patterns of speech I could not always tell which character was speaking and she just sounded silly trying to do some voices - especially men's voices. I would encourage the audio production team to keep looking for the "perfect" voice.

She's just not her father.

The narrator was awful. Her attempt at a Navajo 'dialect' was terrible. It made some characters just sound foolish. As a Native American who lives in New Mexico, it was bordering on offensive.

Narrator was weak on dialects.

I would have enjoyed this more had I read the book ins taped of listening to the audio. The narrator did not sound like a Navajo person but rather more like a French-Canadian with the pronunciation of letter N's and R's.

The story was interesting but did not hold my intense interest as did the earlier Hillerman stories.

Hurrah A new Hillerman to read!

I was skeptical about how well anyone could do with characters so recognizable as Chee and Leaphorn. But this author has captured her father's style and story-telling technique very nicely, The Navaho traditions appear as naturally as you would expect, and all the elements are as familiar as a favorite pair of slippers. All of this is wrapped around a mystery as prickly as the plants of the desert home of Chee and Leaphorn.

Bernie and Jim and the tribal police struggle as they try to solve this shooting without the insights of Leaphorn's years of experience. More than one mystery needs to be solved, adding to the confusion. Another great storyteller comes to the fore, and I would love to read more by Anne Hillerman.

My sole distraction was the reader. Years in the southwest has taught me that Navaho and most other Native peoples of this area, speak exactly as you and I do. Christina Delaine made nearly every native speaker sound if they were barely in touch with English. They sounded wooden, stilted and like they were acting in a badly directed and stereotyped play at a small-town production where Navaho characters would be exotic. If the story hadn't kept me involved I would have quit listening long before the end. Surely, someone must have heard how badly done this was performed. They should have caught this long before it went public. She did very poor service to the story, the characters and the author, who did a magnificent job of recreating the world of her father's stories.

This is a truly great story with a very talented narrator. Both capture what I believe to be a Navajo spirit and sensitivity in the heart of a young woman who strives to be the best she can be. She feels that she has failed to live up to her own standards at every turn yet she gives her heart selflessly to all she encounters. To me, her character shows what it means, to walk in beauty.
The talent of the narrator brings each character to life. Her dialect is as I recall from my friendships with the Navajo I went to school with a long time ago.
The author has carried Tony Hillerman's gift forward and brought her own insight into the development of the characters of Jim Chee and Bernadette Manuelito. She has done well.

I would recommend this book to a friend who enjoys Hillerman mysteries and stories set in the southwest. The conclusion is not obvious from the start and this makes it a more interesting story. I love the southwest setting and all of the Navajo culture makes the scene come alive.

What was one of the most memorable moments of Spider Woman's Daughter?

The scene near the end when Bernie is attempting to rescue her husband shows her fearlessness and dedication to her husband, and to her job.

Nasal, inaccurate and annoying. She sounds like she has a cold. She shouldn't perform with that kind of nasal twang to her voice. Also, her Navajo accent sounds like a cross between a northwest coast "stoner" and the youthful cast of "Smoke Signals" who were from nowhere near Navajo country! As a Native person myself, I feel that her performance stereotypes Native Americans as mentally simple. I found that offensive.

I felt empathy for Bernie's sister Darlene, who expressed that she felt trapped in her life on the reservation. Recently I spent ten days sitting with my sister in the ICU as she slowly died from pneumonia. Because of this, the hospital scenes with Lt. Leaphorn were particularly poignant to me.

Readers should be carefully screened before they are given jobs reading. It was hard for me to get past feeling that a lot of the Navajo characters sounded stoned and simple minded.

Some good continuation, some deviation

The immersion in Navajo culture and the southwest was excellent. For awhile I liked the continuation of A Thief of Time; however, I have read that book 15 times (with high school classes) and I wish the author had. The returning characters drifted too far from their original characters. The last 20 percent of the book became, ugh, chick novel. I would read another one by this author IF it did not take the chick novel route.

Would you recommend Spider Woman's Daughter to your friends? Why or why not?

With reservations. My friends have all read the series.

The accents and the characterization of Chee were horrible. Audible needs to re-record this one.

The end was pretty much out of rhythm with the rest.