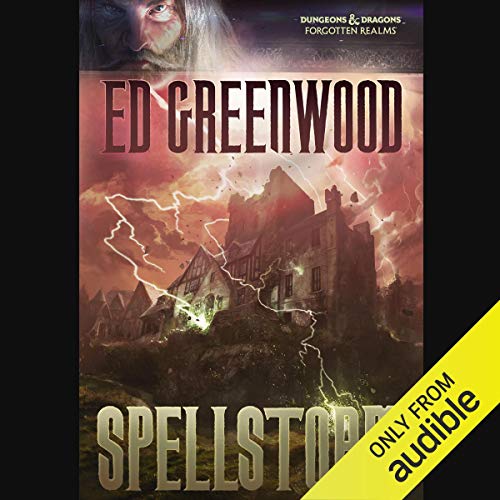 Rumors race around Cormyr regarding the mythical "lost spell", a powerful enchantment designed centuries ago by the presumed dead god of spells - a spell long thought lost to the ages. Found by some magicless merchant, rumor has it the lost spell is to be auctioned off to the highest bidder.

It is a powerful lure, and archwizards of every stripe descend upon the merchant, only to be trapped with him inside his manor by a vicious spellstorm - escape impossible, and their magic useless with the interference from the storm.

Moreover, they find themselves faced with the infamous Elminster of Shadowdale, who claims he's just there to decide who gets the lost spell. Yet he clearly has an agenda of his own.

But before Elimster can put whatever plan he has in motion, archwizards start dying.

About 2/3rds of the book plays out like the game of clue. While this banter back and forth between mages is fun... it can be hard to remember who is who and where they came from. Many people seem to be murdered by others and you really can't keep it straight!

If you’ve listened to books by Ed Greenwood before, how does this one compare?

Standard Ed Greenwood here. Either you like him or you don't. The story really doesn't have an impact on the realms per say (at least not yet).

Sadly, my favorite scene came at the very end of the book (last few pages). By then the story was clear and I knew the players.

Did Spellstorm inspire you to do anything?

I would definitely listen to this book again. It would help understand the beginning with the why and who questions.

I feel if you like Greenwood then you'll like Spellstorm. It's a fun story but just be prepared that the first 2/3rds is not really battles and heroics.

Ok Story, Narration Could Be Improved

The story was ok, though definitely not the most exciting of the series. There are also many parts of the story that are difficult to keep track of and that don’t flow smoothly. Overall not bad though.

As for narration, John Pruden seems to consistently forget how he has previously pronounced the names of people and cities, so I frequently have to think about what he’s talking about and make sure that he doesn’t mean someone that he’s already said before. Also, there are several parts of the audio which have odd breaks in them, even if they’re in the middle of the same continuing sentence. It makes the audiobook feel a bit “sloppy”.

i loved it so much

was easy to listen to. voice of the narator was easy to concentrate on and will listen again soon

Run of the mill Greenwood

I'll buy his modules in a heartbeat. but I've been reading about the same handful of characters for over 20 years now. while I enjoy the read, its getting tired and I ling for new characters.

Sorry Ed :( you and Bob need some fresh ideas!

By far the weakest of the Elminster series.

I'm typically a huge fan of Ed Greenwood and I loved every other book in the Elminster series, but this one was just painful. The story was slow, the action and cast of characters were confusing and hard to follow.

And to top it off, the reader, like many others reading Forgotten Realms books, really missed several of the pronunciations. That drove me nuts and further distracted me from the story.