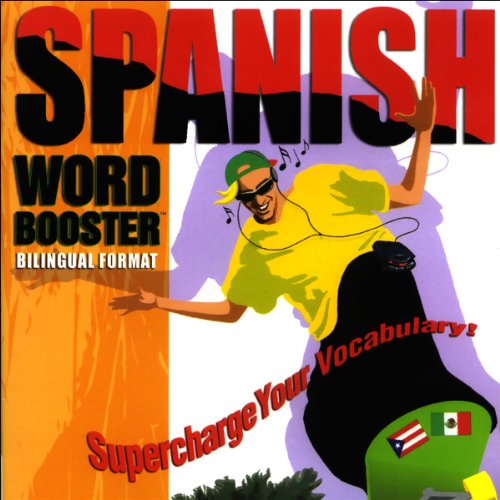 I rated this audio book a 5 because there were a lot of common phrases to help a beginning conversational speaker in everyday Spanish. It was also a very good review. My wife's family is up visiting from Panama, and I got to use a lot of the phrases on my eight-year-old niece. The teaching style in the audio book was very beneficial to me. I feel I have more confidence & ability in my conversational Spanish. It would be nice if Spanish Word Booster expanded to more advanced converstational useage in the future so as to give the growing conversational speaker something as a stronger foundation, being not everyone gets to live in a foreign country for extended periods.

The idea behind this book is really good, but....it would have been much much better if the speakers had higher quality recordings and the music had been drastically toned down.

Definitely makes Spanish vocabulary more accessible as I quickly found myself chanting with the tape as I do chores. The beat makes it easier to stay with the whole process.

Good for review, not for learning anything new.

I wish there was more dialogue instead of it mainly just being vocabulary lists read aloud.

What was most disappointing about Vocabulearn’s story?

I was hoping that the music would be used to teach phrases to a catchy or familiar tune. Instead, lists of vocabulary words were read (followed by their translation) in time to cheesy synthesizer beats.

Both narrators were quite good and easy to understand. The brief dialogues between them that mixed Spanish and English to introduce the vocabulary lists were the most useful part.

Was Spanish Word Booster worth the listening time?

Since it was just a little over an hour, I didn't feel like it was too much of a waste of time, and it really was probably a good way to brush up on vocabulary words that I already know.

I recommend this as a way to brush up on Spanish vocabulary that you already know, but it is not a good way to learn new vocabulary.

This is definetly worth buying. I am a beginner and this was perfect for learning instant words.
The man and women explain what section of words are next and how they should be used. The music in the background really helps move things along quickly and they repeat the words only 3 times. I put this on my ipod to push pause and write down the word and the section so that I could follow it and learn it quicker. Its worth the money and effort that you put into it. Many words! Even words I didn't know further into the list. Great investment if you really have the time.

Vocabulary is important, music is important. Learning foreign language vocabulary while also listening to dumb music is distracting for me- too much stupid audio stuff to process. Do we need 'sugar-coating' to make the medicine go down? What is the concept here, anyway?
I wish they would just repeat the words as they do but without the prefab background music. -More vocabulary, less music, smaller file size, more value. Words rarely go out of style while the same is not true for elevator or 'canned' music. Maybe content quality of Mozart or Beethoven in the background would be okay but not what they are playing.

Excellent for Adding Words to Your Vocabulary

Spanish Word Booster: 500+ Most Needed Words & Phrases, by: Vocabulearn. The Plot (yes this book has a design), is a boy on his way to a local concert meets a girl (his sister?) and he suggests they go to the concert together. Once there, he suggests (why is it always he doing the suggesting and she agreeing) they practice their Spanish/English against the instrumental music. They take on topics of nouns, (gender and plurals), adjectives, adverbs, verbs, counting, idioms and more.

As the music plays they match the English to the Spanish or the Spanish to the English. This is not for anyone attempting to learn Spanish or English, but is a wonderful tool for increasing vocabulary. I do not use the book as my learning device for the language overall but as an opportunity to hear more Spanish quickly and imprint the words better on my mind. It provides me with dozens of items of new vocabulary and puts into my mind that which I know but have not yet made second nature.

I play it anytime and anywhere. To put me to sleep, while I cook or if I just need a few minutes of Spanish. Great extra tool. Wish they had a second or advanced version.

Maybe good for kids and teens, but not for adult learner

What a bad idea to repeat everything twice in English. We know English already, thank you very much. And the music is very annoying.