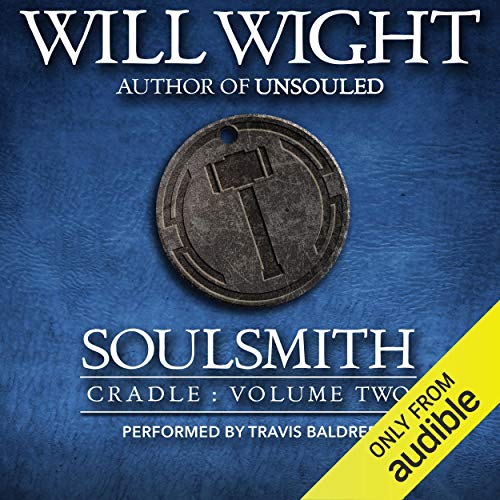 Outside Sacred Valley, ancient ruins rise from the earth, drawing sacred artists from miles around to fight for the treasures within.

Factions rise and fall as warriors bicker over rare resources, but time is limited. A powerful family from the Blackflame Empire is coming to claim the ruins, and when they arrive, no one else will have a chance at the prize.

Lindon has reached Copper, taking the first step on the road to power, but the warriors of the outside world are still far beyond him.

To advance, he turns to the arcane skills of the Soulsmiths, who craft weapons from the stuff of souls. With new powers come new enemies, and Lindon soon finds himself facing an entire sect of Golds.

I love this series and it picks up in book two.

First off I have to say that I have read all four books htat are out right now and am a little miffed that they split them into four books. Honestly it seems like books 1 and two were one book cut in half and three and four were cut in half to sell more books for more money. I mean let's be honest in book one some stuff happens but not a whole lot of progress is made by the main character accept getting into copper. This book he gets into iron and the ending feels different than book one. It is a good ending and leads into ook three nicely. Same thing happens with book three to four only backwards. A lot of progress is made in book three but then ends with you waiting for a duel. Book four not a lot of progress is made with the main character accept the duel and him discovering stuff and becoming resolved to reach the peak of cultivation. Again book four ends well vs book one and three. Am I the only one seeing this? All in all the series is worth the credits.

Unlike the first, this book devotes far more time to fighting scenes and the esoteric details of the magic system. There has been very little character or relationship development. I am half way though and quite bored.

Furthermore, these books are not a bargain. Each one in the series is only 7 hours long. That's about a quarter the usual length of a sci fi book. Even on sale at $5, this book is very expensive compared to others in the genre.

At least the narrator is less over the top in this book.

A rip-off of Dungeon Born by Dakota Krout

This story was ok. The characters are flat. The story is confusing and not really going anywhere. The side story about "the gods" is horrible and should be removed. The information dumps labeled as "query" need to be spread out and incorporated into the story. The author does not hold to his own standards set in the book, making things inconsistent.
Now for the pros, the book is engaging enough to keep me wanting to know how the MC will grow. A lot of the ideas are taken from Dakota Krout's series but that series was decent. I don't think I'd recommend this series to a friend because the books are too short. Really, two of the books equal one. It's kind of frustrating to spend money on half a book and then have to buy the next half. Did I say pros? I guess there really aren't any. I just like it for its video game aspect. I bought the third book, but just barely. We'll see if I stop there.

Hard to put down. Believable characters, amazing and well thought-out world with a mix of primitive and futuristic cultures with martial arts focus.

It’s crazy that the direction this book is going. From where things began, I would have never guessed that there was an entire world of super powered people surrounding Lindon’s humble village. The trials that Lindon goes through are interesting and the way he developed is so cool. I'm loving Baldree's narration.

Well written book but some issues

This is a well written book. I have one major issue that made me have to listen to it in triple speed. Over and over and over you have to hear about how pathetic the main character is how he is weaker than a 6 year old. He has to be one of the most useless sad MC’s I have ever read about. Honestly I would return the books and not read it I did not accidentally read some of book 6 and see that the MC is not super pathetic and bowing and kissing everyone’s rear end. I feel like every other sentence in the book is to remind you have weak and unfortunate the MC is, and that he can’t do anything.

A 5-star rating for me is this: The combination of a great story with a medium level of details which is then told flawlessly with great voices. So far, the Cradle series delivers.

Loved the first one and this one didn't disappoint. My boy is growing finally and the future is looking bright.

Will Wight does a great job of writing books that keep you wanting more! High action and exciting.

This book is just too good

I literally went through this book in a day. I listened to it at work and couldn’t put it down when I got home. My only complaint is that I wish it was longer. Book 1 was amazing and this continued the trend.

The only reasons i continued to the second book, are the narrator and the hope of the Story getting better. But its just so borring.
Shout out the Travis Baldree, best Thing about this lame series.