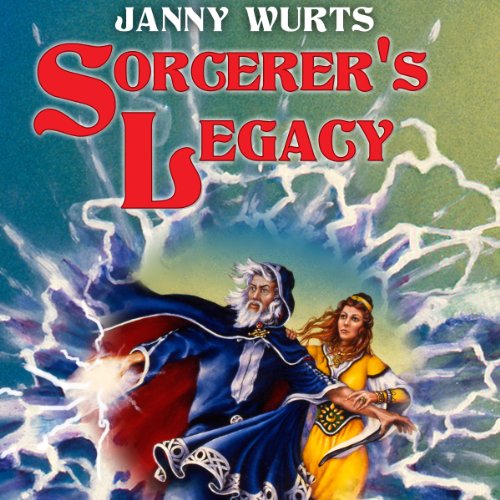 In Janny Wurts' Sorcerer's Legacy, we discover a world full of magic and intrigue. It is into this world that Elienne has chosen to come, to save a prince's life. Lady Elienne finds herself captive in the dungeons of the one who killed her husband and conquered her lands. While there, a great wizard appears to her, offering to take her away. Does she stay and suffer certain cruelties from the one who now wants to make her his new queen...? Or does she go with this wizard who claims that she is the only one who can save his prince's life? Neither choice has much chance of her surviving, so neither choice looks good. But if she goes at least it will be by her own choice...

Delightful! A fast moving, peril ridden journey for both a prince and his consort. Emily Gray is a wonderful narrator. I don't think I've listened to her before. I hadn't read this book before this audio edition was released. It was kind of hard to come by and it's only in paperback, used, and I cannot read the small print in paperbacks. So I was glad I could read this one. I think now that I've read all of Wurts' work.

Most readers are probably familiar with Janny Wurts’ epic fantasy series THE WARS OF LIGHT AND SHADOW or the EMPIRE trilogy she wrote with Raymond E. Feist back in the ‘80s, but Wurts also wrote a few stand-alone fantasies, two of which have just been released in audio format.

Sorcerer’s Legacy, Wurts’ debut novel first published in 1981, is one of these. In some ways it feels like a 1981 high fantasy novel (e.g. the medieval setting) but, in the most important ways, it stands out. The story is about Elienne, the recently widowed and pregnant wife of the ruler of a conquered country. She’s been taken captive and awaits what’s certain to be a nasty fate when a wizard from another country saves her on the condition that she marries his endangered prince. She has no choice but to agree, of course, and off she goes to an unfamiliar land where she is alone and unloved and expected to marry a stranger while she grieves her lost husband. At this new court she discovers not only the political intrigue she expects, but also treachery, violence, torture, child abuse, and black magic. Elienne has no idea who she can trust and her only sure ally is the prince she’s supposed to marry.

How does Sorcerer’s Legacy stand out from so many of the other high fantasy novels published in the early ‘80s? First of all, it’s a stand-alone novel — hooray! (Though many readers will wish it was the first of a series.) It’s also got a terrific heroine. The setting is medieval, but Elienne doesn’t try to unrealistically bust out of her traditional gender role. She’s foul-mouthed, independently-minded, tough and opinionated, but Wurts doesn’t try to convince us that Elienne could whip ten men in a sword fight. Elienne’s feminine traits are actually her greatest strengths — she’s compassionate, protective, and loving.

The story is also fast-paced and the plot is almost completely unpredictable — two qualities that I don’t expect to find in a high fantasy novel written in 1982 but that I have come to expect from Janny Wurts after reading her excellent stand-alone To Ride Hell’s Chasm. Everything does not turn out well in the end — there is much loss and grief — but there is also beauty and hope.

The audio production of Sorcerer’s Legacy, produced by Audible, is wonderful. Narrator Emily Gray has a lovely voice and handles Wurts’ complicated sentences with ease. The book was a delight to listen to. Sorcerer’s Legacy is an impressive debut and the audio version does it justice.

Just nothing exceptional on any front. The characters were cliché, and the narration kind of bland. Nothing truly terrible, but not a book I would recommend.