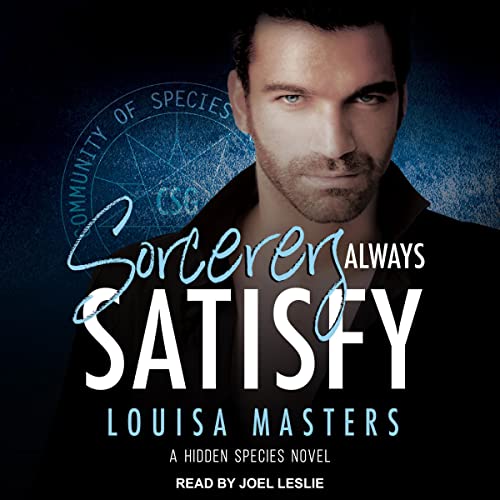 Just because I enjoy planning and researching doesn't mean I'm not the most dangerous badass mothercracker around.

The world sees me as boring, dependable David. And I like it that way. I know things and I'm organized. Plus, I've seen firsthand the harm a chaotic life can inflict, and I'd rather have my lists and be called dull. Which is what makes it all the more disconcerting when a sexy elf declares his adoration and begins to "woo" me. What am I supposed to do?

Hide, mostly. It's hard, though, because Caolan and I are supposed to be working together. And he's tough to resist: sweet, competent, and so incredibly beautiful. He sees something in me that no one else does. Would it really be such a bad thing if I gave in to temptation?

But my personal life can't be the priority right now. The bad guys are gearing up to strike, and if we don't stop them, the end of the world could be nigh. I need to focus on that, not on letting Caolan show me the benefits of spontaneity. Why don't world-ending disasters come with an instruction manual?

This was my favorite. I listened in one sitting and laughed out loud several times. Such a fun book and tied up things in a satisfying way. Joel Leslie, as usual, was fantastic.

so much lol moments! their is action but angst! just so much fun! absolutely loved every minute of this series!

This is my favorite book in the series so far. I love it so dang much! Made me cry so many times. David and Caolan are adorable. Caolan is so sweet, he makes me feel all mushy inside. I love the undying devotion... before popcorn. 🤣

I can't wait for more in this series!

I love their relationship so much. That whole journey was so cute & perfect & hilarious & even I tell you I SCREAMED “NOOO” so loud even I finished this series. I want so much more of these guys 😭😭😭

I had been avoiding picking up the first book in this series for a while, im super glad I bought thebbook involving percy without knowing it was connected to this ome! the descriptions dont do the series justice. I thought itd be a dull office romance with a few supernatural quirks. I was very wrong. Once I heard percys story I had to have more and that brought me to realizing this series was way better than meets the eye.

Joel Leslie and his many voices make this excellent story so much fun to listen to!!!

Best of the series by far

Book 4 is by far the best of the series. Too many moments to laugh at, a level of "awww" that isn't too mushy, some action, some "action", and an ending that brings up emotions from the entire series. Performance is great as Joel ALWAYS does. I need more like this!

Louisa Masters is a master at creating intricately woven escapades. Her ability to depict is comparable to walking into an art museum after regaining eyesight. The impact of color is startingly refreshing. Draws you in and immediately has you grasping the next page to see what's next.
Joel Leslie is by far the best narrator I've heard.

I’ve enjoyed this series and this one was no different. Organized David has the adoration of a certain elf and he doesn’t know what to do. The migration of the elves and dragons is going well but Tish is still out there sticking his fingers where they don’t belong. There was a great standoff and Percy let’s his cat out to play. A fun listen

Would I listen to it again: yes ✔
Did the story keep me engaged: yes ✔
Was I invested in the characters: yes ✔

📖 Story comment: The characters are entertaining and the plot was interesting. David and Caolan make a good pair and are a good balance for each other. Experiencing modern society through Caolan's eyes was amusing, and I enjoyed the snark, humor and "antics" of the CSG team. The overarching story of the series ties up well, but I felt the final showdown with the bad guy was a little rushed and a bit anticlimactic for what I've come to expect from this author.

I've enjoyed this series enough that i'll pick up it's spin-off "Here Be Dragons".

🎧 Narrator comment: Joel Leslie is a master voice actor and suits the personalities of these characters. He has good cadence, inflections and intonations, he's kept the consistency of characters voices throughout the series so it's easy to distinguish all the characters from each other and he's done a stellar job bringing this series to life.

I liked his quiet competence in the previous stories. It felt really good to see him find love and happiness! Again, despite theoretically having high stakes, the story lacks real tension, but it didn't feel so jarring this time. Maybe because David is just that competent.
Caelan is just precious. He tries so hard to win David over! From earnest declarations of love to getting him food to, ah, other things. Despite their differences, they work so good together it's ridiculous. Also, all the elves and dragons learning about modern society is just too cute!
I think this story might be at its end, though I would very much like to hear a but more about Percy's life... The ending was quite the surprise!