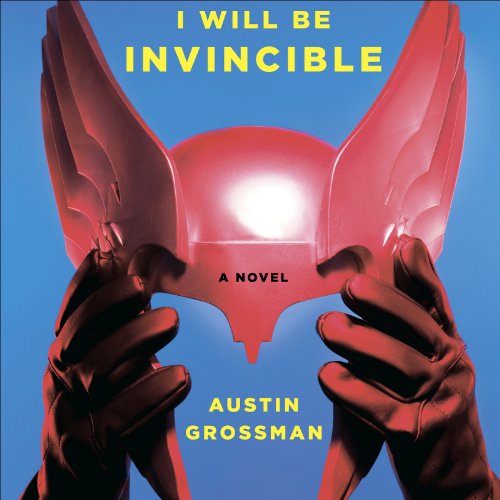 Soon I Will Be Invincible

Soon I Will Be Invincible

Over the years, he's tried to take over the world in every way imaginable, using doomsday devices of all varieties (nuclear, thermonuclear, nanotechnological) and mass mind control. He's traveled backwards in time to change history, forward in time to escape it. He's commanded robot armies, insect armies, and dinosaur armies. A fungus army. An army of fish. Of rodents. Aliens. All failures. But not this time. This time it's going to be different.

Fatale is a rookie superhero on her first day with the Champions, the world's most famous superteam. She's a patchwork woman of skin and chrome, a gleaming technological marvel built for the next generation of warfare. Filling the void left by a slain former member, we watch as Fatale joins a team struggling with a damaged past, having to come together in the face of unthinkable evil.

Soon I Will Be Invincible is a thrilling first novel, a fantastical adventure that gives new meaning to notions of power, glory, responsibility, and (of course) good and evil.

"Austin Grossman has a superpower himself - it's called writing. This book is a new, winning, smart and funny way of interpreting our world. It's terrific." (Douglas Coupland)
"The realm of comic book heroes and villains gets a dose of realism in this whimsical debut....Grossman dabbles in a host of themes - power, greed, fame, the pitfalls of ego...broadening the appeal of an already inviting scenario." ( Publishers Weekly)

If you have ever groaned in tortured agony when the Super Villain pauses before dispatching that annoying hero into the component atoms he is made from, (allowing the Hero one last chance, why won't he kill him!?), or wondered what Heroes lives are really like, you will love this book.

The story is told through two vantage points, a new heroine just starting out, and an old hand Super Villain. You see into the inner psyche of an emerging hero and what makes them tick. You also get to plumb the depths of a Super Villain's mind as he plots to . . . TAKE OVER THE WORLD!!! MUHAHAHAHAHAAAAAA!! Just flippin' awesome, that's what it is!

This is a wonderful enjoyable tale that will take you back to your days reading comics and addresses all those questions you might have had about your favorite Hero or Villain. Totally enjoyable, not too deep, and the narration was excellent.

I enjoyed it immensely. This is a very light read, not War and Peace, so judge it accordingly. Worth a book credit for sure! I'd write more but I have to work on my plan to . . . TAKE OVER THE WORLD!

I listened to this book on a recent road trip with my sister. Unlike most Audiobooks, this one was more fun to listen to with someone else than alone (although it would still be fun alone). We had a great time picking out phrases and scenes from the story to discuss, repeat, and joke about later.

The voices were very well done, true to the "comic book" feel of the story, without being overdone. My favourite character was the super-villain, and I found myself anticipating his "turn" throughout the story.

A Must for Superhero Fans

It would be an oversimplification to say this book is Watchmen-lite. In a lot of ways, it would be a disservice to this novel and a complete misunderstanding of everything that made Watchmen work. There’s a fundamental difference, aside from the obvious that this is a novel and Watchmen is a graphic novel. Where Watchmen is a complete deconstruction of the superhero formula, turning our brightly-colored saviors into normal people like you or me, Soon I Will Be Invincible carries a different ideal at its core. In Watchmen, there is only one superpowered hero, who is no longer even in touch with what’s left of his humanity. In Soon I Will Be Invincible, there is only one hero who is unpowered. The rest carry the burden of responsibility of who they are and where they came from, whether they are aliens, genetic grafts, reconstructed cyborgs, or supernatural beings. The message is that even though they are different, they are still (mostly) human too, and with great power comes great dysfunctionality, which they must overcome if they are to battle the mastermind Doctor Impossible.

There are two narrators who alternate turns as Doctor Impossible and Fatale, as the book is told alternatingly from their differing perspectives. For Doctor impossible, everything is old hat. He’s been defeated time and again for inexplicable reasons, and he will finally beat the heroes. For Fatale, as the junior member of the superteam, everything is fresh and new, and not quite what she imagined or hoped for. We meet Doctor Impossible first, and this first chapter is quite possibly the funniest thing I’ve ever been exposed to in the superhero genre, with the possible exception of perhaps Ben Edlund’s The Tick. It sets the tone for the rest of the story, and sucks you right in. Aided with the voice of the narrator, who sounds surprisingly like Maurice LaMarche, Doctor Impossible comes across as an interesting mix of Ozymandias and The Brain. Offering counterpoint to this viewpoint is the character Fatale, essentially a female version of RoboCop, who has become a superhero when the government funding needed to keep her running has come to an end. Again, the narrator for Fatale’s story is perfectly-chosen, offering a mix of strength and vulnerability.

As the story goes along, you get a concise and human (where possible) origin story for every character in the book, turning this into something every bit as complex as Watchmen on the character level. Some would say that on the literary level, it perhaps lacks the social relevance of Watchmen. Just the reverse, I think a story like this isolates exactly how alone and isolated the average comic book fan can feel at times, and why these kinds of archetypal characters resonate with audiences across decades. I won’t say it’s “as good” as Watchmen. Rather, I will say that Soon I Will Be Invincible is a great companion and counterpoint to Watchmen in most respects. It offers character development, all the classic bits with a fresh perspective, and a little something that Watchmen doesn’t have in abundance: hope. These characters, regardless of their backstories and inner turmoil, challenge us and themselves to rise to a higher level.

As one who used to collect comics heavily and then basically became jaded by the industry in the past decade, this book is a reminder of every reason of why I still love superheroes. It appeals to me on so many levels, and I think anyone who appreciates something more than the brooding, armor-clad killjoy characters will find something to enjoy here. Books like this bring back the fun to a genre that’s taken itself way too seriously since the closing days of the last century.

Entertaining, if not terribly original

Man, half the time i was wondering to myself if the makers of Megamind optioned this novel before they proceeded, because the portion of the book narrated by the supervillain sounds so much like the titular cartoon character, that it's almost as if Will Farrell was parodying the performer of this audiobook. (run-on sentence much?)

The first third of this book was massively engaging to me. It was a uniquely voiced take on the very familiar superhero genre. I equally enjoyed both points of view, both that of the villain, and of the hero, herself a newcomer to a Justice League-type hero team.

However I the book started losing a lot of steam when i realized that the majority of the story was going to be given in flashback. That is a really terrible way to tell a story: to set up present events and then spend 75% of the book having the characters recollect past events. Why? It was just so unnecessary. One example: Near the beginning when the hero gave a quick summary of a past event wherein one of the heroes sacrifices their own life. I thought it was brilliant. Then later on when we got an excruciatingly detailed description of the same event i was rather frustrated. That same problem repeats over and over again. Near the end i kept thinking they must be done with all the backstory exposition, but nope, they just kept going.

So ultimately the book runs out of steam and the ending is fairly unsatisfactory. It's too bad. I really enjoyed the setup. I really didn't mind that so many of the character archetypes were ripped straight from the DC mythos (CoreFire=Superman, Blackwolf=Batman etc) because i like to see authors have fun outside the box with those familiar characters. However this book just can't quite pull everything together in the end. A decent effort, however flawed.

Having said that, if there was a sequel wherein the characters moved FORWARD instead of spouting nonstop exposition, then i would totally pick it up.

A tremendously fun read. I'm a pretty big fan of comic book mythos and cliches, and the author definatly touches on most of them, while playing with the standard themes.

Well written, with a good plot, though the character development is what you'd expect out of a 6'6" female cyborg, or a mad scientist.

Fantastic Book Gripping To The End

Great character development, fantastic storyline, the plot had great pacing. The reader was able to really empathize with both Mr. Invincible and Cybergirl. Awaiting the next book. Great locution!

Great, but where's the editor

This book is one of my favorite so far. However, I found myself being taken away from the story every time one of the two actors mispronounced a word. Seriously, was no one listening? One of them is supposedly the most intelligent man in the world, it was so unbelievable that he would mispronounce coup de etat. This is the first time in quite a few books I've noticed such incredible errors.

This was a fun audiobook to listen to the story moves along at a fast pace and has many humorous moments throughout.Authur Grossman's story revolves around supervillian Dr.Impossible who starts the story imprisioned and he dosen't like it at all as he calls himself the smartest man in the world he can't wait to enact his next plan on taking over the world. The good guys who work to catch and stop Dr.Impossible in his plot are the champions with new member Fatale who has a fascinating story of her own .The narrators Paul Boehmer as the voice of Dr. Impossible brings to life the arrogance ,wittiness and evilness of the character . I especially enjoyed his narration of the final battle. Colleen Marlo does a good job also as the voice of Fatale she perfectly captures the alienation and outsider feel of Fatale . This story has an old style feel to it like the old radio Superman shows there is even musicalal introductions to each chapter a neat touch to me . Give this a listen you don't need to necessarily have any knowledge of comic book history or characters even though there are lots of comic references .

So much more than I expected

Okay, we live in an age where Superhero movies are taken seriously, so it's no surprise that superhero novels-- other than the ones based on the movies, or based on the comics-- can exist now.

But what's really great is that there is a real story here, with, y'know, plot, character, backstory, suspense, and whatnot.... while at the same time there's a lot of great jabs at the clich?s of superhero stories.

This book was fun. Grossman does a great job humanizing the superheroes and villains. It's great getting the characters inner thoughts as they're getting thrown through walls or trying to impress the others (usually to no avail). The narrators do a great job as well.