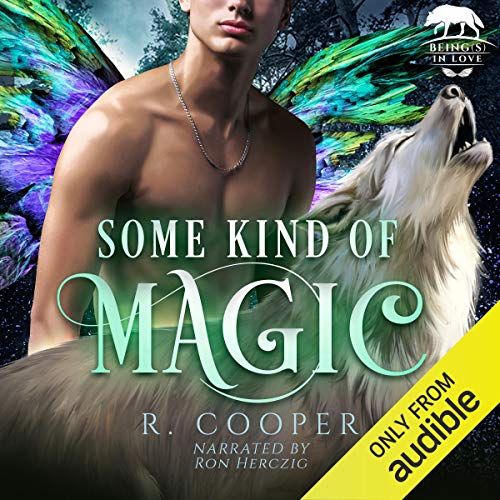 Some Kind of Magic

Honorable Mention for Best LGBT Cover in the 2011 Rainbow Awards.

Being a police detective is hard. Add the complication of being a werewolf subject to human prejudice, and you might say Ray Branigan has his work cut out for him. He's hot on the trail of a killer when he realizes he needs help.

Enter Cal Parker, the beautiful half fairy Ray's secretly been in love with for years - secretly because while werewolves mate for life, fairies...don't. Ray needs Cal's expertise, but it isn't easy to concentrate with his mate walking around half naked, trying to publicly seduce him. By the time Ray identifies the killer - and sorts out a few prejudices of his own - it may be too late for Cal.

Wonderful beginning of a wonderful series. I recommend the entirety of this series, in order preferably, the progressive discovery is epic and deep. And the love stories are very beautiful. All the pining and admiration, it's awesome. I've read them many times, and I'm still discovering new layers of meaning, and still rooting for the characters, and still moved by their efforts and love.
The interpretation is really good, too.

I could not get passed the monotone voice. I'm sure the book would have been enjoyable with a better narrator.

The Narrator of Doom

The book was good, but the narrator is awful.

Who would you have cast as narrator instead of Ron Herczig?

This narrator, Ron Herzig, is TERRIBLE. I had to return one book he narrated before, but I'd forgotten his name so I didn't recognize it when I made this purchase. I won't make that mistake a second time. The first time I heard a book he read, the book was by Cardeno C., one of my favorite authors. NOW, he manages to ruin a book by another of my favorites. Why, cruel world!? His inflection is mutilated and there is no distinction in the character's voices. Add to that the fact that I have to listen to him on 1.5x the speed and it is a rainy day in the land of rainbows and unicorns, indeed.

Can people stop using him as a narrator, please? He would be great reading a political bio or something equally innocuous, but for romance novels and books with colorful characters, he is far far less than ideal. He does not sound excited about anything, he slurs a lot, there's noise in the background, and (again) his intonation blows...rather, it just isn't there. I may as well have been listening to SIRI read the book. I've resigned myself not to purchase audible books by this narrator in the future. He really puts me off the story.

I have to give this one star. the narration was so bad I could not even understand what was going on with the story.
the truth is it might be a good story but the narration is so bad there's no way to know.

There is no other word but drones for the narrators voice. Might have actually enjoyed the story but for that.

Creative and cute story, so so narration

Ray is a grumpy werewolf cop whose found his mate in Cal- the flighty half-fairy and he’s fighting it because he’s afraid of getting hurt.

In addition, there’s a paranormal mystery to solve (a murder!).
**

Cal and Ray dance around each other for most of the book. Their dialog is amazingly entertaining, and highly frustrating at times.

R Cooper gives us a rich, complex world and a dense and involved tale – even though it’s a relatively short story. Ray is funny and grumpy and growly and Cal is (on the surface) just flitting about – but actually feels deeply.

There’s glitter and wings and magic … it’s a wonderful thing!

Fans of the werewolves, magic, fairies and the paranormal will find a little bit of something in this to love. The romance is sweet and satisfying.

Ron Herczig isn’t my favorite narrator. He has a way of ending each sentence on an up note that gets in the way of my full enjoyment. However, he does a fantastic job with voices and dialog and I really enjoy that aspect of his story-telling.

For the book and the narration 4 of 5 stars

The overall story is good. My problem came from the scenes switching between present / past. The narration was great. Maybe my confusion stemmed from the story being spoken instead of me reading it myself.

I cannot tell you what this book was about, I couldn't tell much of anything. Due to the narration performance, I was confused when the scene changed, if the characters were talking about the past, etc. Ron has a nice voice, but its so monotone it just ruined the book. Ron needs to work on his expressive tones and character voices.
Yet, I bought the book and couldn't return it, So I just suffered throught it. I couldn't even tell you the majority of the plot and when I thought I could the ending was confusing. But hey the characters got together I guess.

AND NO you dont need this book for the series. I thought I did and just ended up wasting money.

I'm not rating the story due to the narration.

Probably a great story in reality but I just couldn't get into it with the way the narrator performed. There was no real feeling of emotion. Every scene felt the same and it was particularly frustrating during times when you knew there should have been a real sense of urgency, fear, or passion.

I love audio books, but I can not even get to the end of this one. Don't wast your time

i listened to the whole audiobook. i had listened to little wolf before whicc i found captivating so this book of course had it harder. but i found this book somehow disjointed. it started somewhat abruptly and the love between the two main chars was somehow not well descibed. you could not feel the love. and the old (spoiler alert) i will not enter in a relationship with you bc you will just leave me anyway thing is getting old. bitch please and the murder mistery don't get me started on this you have no connection to the villain or any real understanding for his reason... so all in all it was a bit meeh

I lovvvved it so much!!

it was a delight!! it was fun, it made me snort with laughter all their banter was perfect!!