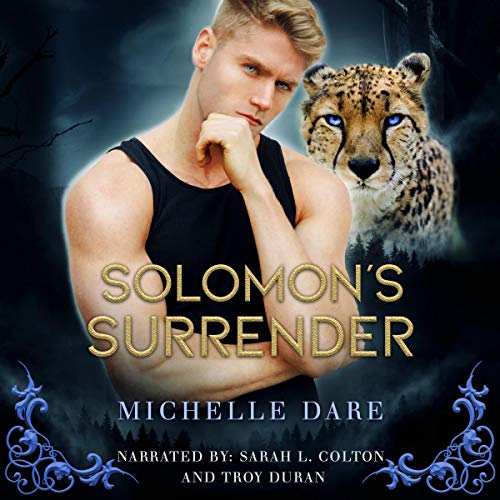 He projected the playboy image, but only he knew the truth. Deep inside, he wanted what his brother and friends had - a mate.

Fifteen hundred years was a long time to be alone. Solomon’s pure vampire bloodline and family name made him desirable, but that didn’t take away the loneliness.

Lilah was fiercely independent and distrusting of paranormals out of necessity. Some treated her with contempt because of her half cheetah shifter/half fae heritage. They thought she was beneath them when she was actually superior.

Someone was determined to take Lilah’s life, but who was behind the attacks remained a mystery. Solomon fought off the first assault then became Lilah’s sole protector until he uncovered who wanted to harm her.

One wanted a mate, and the other didn’t. But fate didn’t ask for their opinion.

They could only fight what was meant to be for so long before the inevitable happened. If they managed to stay alive, maybe they would learn what it meant to be fated.

Solomon finally gets his story!!!

Michelle Dare is a fantastic writer! She has made me love Avynwood, and all of the shifters that are part of this series!!

Solomon has always been in his own, he spends a lot of time with his brother Ford and with the shifters if the Avynwood pack. This time... he gets his story.

Lila is part shifter, part Fae and is NOT looking for someone to answer to. She avoids touch because she doesn’t want a mate. When Sol comes into the bar she works at, he is drawn to her and comes on strong. He is smitten, and keeps coming back , wanting her to for out with him.

There’s an explosion at the bar late one night, and Lila and Sol are thrown together to find out who did it. This brings them closer and they learn more about each other.

The entire story is a wonderful listen. If you have listened to any of them, you may be like me and be anxiously to hear Sol’s tale. I recommend this highly. You want to hear it!

Probably y favorite book of the series although I saw that with each book but man they just keep getting better seeing Solomon at his wits end over a female was just awesome! He has finally met his match in Lilith been waiting for this book for some time and it was everything I hoped for as with all the books Troy and Sarah are fantastic!

My favorite of the series!!!

I am LOVING this book! Soloman has been a favorite of mine since he showed up...well Ford was first but then Soloman was so prominent in his book that he became my new fav. He is an antagonist and cocky which make for the fun parts of the book. He also is very protective with anyone he loves or is family.

Soloman cracks me up! I really love his attitude and demeanor. Troy Duran does an amazing job becoming playful, sarcastic or sexy Soloman. I could listen to him all day!

I want to give a shout out to Michelle Dare. She did amazing with this story and these characters! Lilah is the perfect compliment to Soloman. I know I said this last book but this is my new fav of the series!

I did listen to this on audio. Troy Duran and Sarah L. Colton narrated. I can’t even! These two do an outstanding job with these characters. They do more than just read the book. They add so much more!


I loved everything about this book, from Michelle Dare’s wonderful writing style to the story and characters she created to Tory Duran & Sarah L. Colton’s fantastic narration. Michelle Dare is a gifted author and I just love the imaginative world she created as well as all the different supernatural paranormal beings who live in that world and amongst each other. These include Vampires, FAE, different breeds of shifters and hybrids. I started this series with the 3rd book so I did miss familiarity with some of the recurring characters from the 1st two books, but that did not take away from my enjoyment of this book, it just made me want those books even more. This book swept me in right from the start. I liked Lilah, her story pulled at my heart, I pictured a 4 year old packing her stuffed animals. I admired her strength and got her reserve & reluctance to get close to anyone. Then comes Solomon, oh my what a character, I just adored him, his sense of humor and his cocky mind. He had his work cut out for him with Lilah. When her life is threatened Solomon goes in to protective mode and wants to keep her safe. They convince her she is better off staying with him. I loved how everything plays out in this book, there is never a dull moment, with plenty of drama, great humor, angst, action, twists, thrilling suspense and some hot romance. Michelle Dare, thank you for another great & entertaining story, loved that fun epilogue I am looking forward to going back to catch up on the 1st two books and the fascinating character in those books.

Troy Duran and Sarah L. Colton are fabulous narrators and voice artists. They continue to bring these characters to life giving each their own voice and personality. Their portrayal of the characters is spot on, they do them all justice and sound just as I picture them to. They are entertaining storytellers and a pleasure to listen to. Thank you for another amazing listen🎧

This was more Lilah's surrender than Sol's. He gave into fate hands down when he met his mate with very little struggle. I'm in awe of teleportation and I loved its use in this story. I enjoyed the retribution scenes. It was only fair after all the destruction caused. The epilogue with the bed scene-hilarious ending. I voluntarily listened to a free copy of this story and am giving an honest review. The narration was enjoyable.

I love this little world that is this series. Glad Sol finally got his forever. Wonderfully written and narrated.

I love the characters. Solomon is hilarious and I like Lilah sting will. Cute story, one of my favorite romance book. I love the no cursing in the book. It is very pg rating and good! Now I need to read the 3 books before hope they are good. Want to read them before I go to book 5

Loved this story! Solomon never thought he would find his mate and did. Michelle Dare sure did deliver on this one!
Loved both narrators and the style that was used.

Solomon's Surrender is an excellent YA paranormal fantasy romance with an engaging plot and awesome characters. Michelle Dare is a brilliant author with a fantastic imagination. The narration by Troy Duran and Sarah L. Colton is outstanding; they both bring the characters to life. I was given a free copy of this audiobook at my request and have voluntarily left this review.