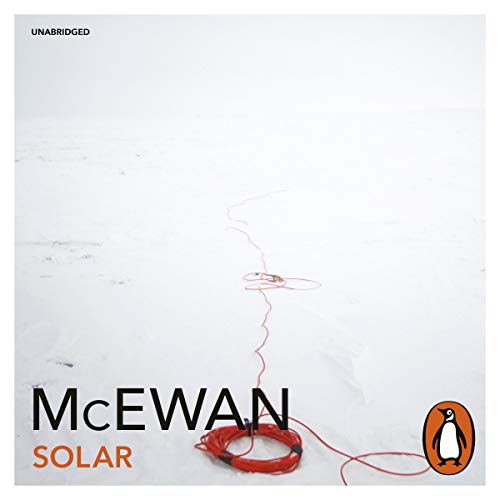 Features the author in converstation with his editor, Dan Franklin.

Michael Beard is a Nobel prize-winning physicist whose best work is behind him. Trading on his reputation, he speaks for enormous fees, lends his name to the letterheads of renowned scientific institutions and half-heartedly heads a government-backed initiative tackling global warming.

A compulsive womaniser, Beard finds his fifth marriage floundering. But this time it is different: she is having the affair, and he is still in love with her.

When Beard’s professional and personal worlds collide in a freak accident, an opportunity presents itself for him to extricate himself from his marital mess, reinvigorate his career, and save the world from environmental disaster.

Ranging from the Arctic Circle to the deserts of New Mexico, Solar is a serious and darkly satirical novel, showing human frailty struggling with the most pressing and complex problem of our time. A story of one man’s greed and self-deception, it is a profound and stylish new work from one of the world’s great writers.

'[A] novel that promises comedy as well as crisis.' ( The Guardian)

And I'm clearly not talking about blood and guts here. Solar sits you down and serves you scotch in the mind's armchair of Prof. Michael Beard, Nobel Prize winning scientist, opportunist and everyday scoundrel. Entertaining because it's funny - he is a true rogue and gentleman, and squeamish because despite your better judgement you'll be on Beard's side. Mostly because you've silently recognised the rogue in yourself. Surely that's not just me?
There are those who call this the most self concious novel in a string of particularly successful books and perhaps there's truth to that. But Solar is well written, well read, and will in parts raise more than a smile.
Blurring the boundaries between fiction, hearsay and fact, there's plenty to sink your teeth (ears?) into. Thoroughly modern, thoroughly enjoyable.

One of the best Ian McEwan novels!

"Solar" far exceeded my high expectations. I consider myself an experienced reader of McEwan's novels, having gone through the excellent "Amsterdam", "Enduring Love" and "Saturday". In my opinion, "Solar" is the best among this impressive peer group of novels. I might be prejudiced, as green technology is one of my areas of interest, but it is not just the excellent insights on technology that make this book truly Great. Professor Michael Beard's character is a dramatic one, at times reminding me of tragic Shakespearean protagonists.

Beard is a man with a cognitive claim to fame (his Nobel Prize) that is quickly gathering dust, and who more than offsets this achievement by pretty much screwing up everything else in his life: obesity, lack of social intelligence, marriages and breakups, cover-ups of his vile deeds, general "untidyness", etc.

As usual (he's done similar things in earlier novels), McEwan introduces a dramatic plot turn that is defining the rest of the novel. After that, the decay of Michael Beard seems to accelerate.

A great novel with a nice structure incorporating flashbacks, well narrated in the audiobook version, and ending with an insightful interview with the author.

I hope you will enjoy it as much as I did.

What a disappointment!
McEwan either has a brilliant vocabulary or a well-thumbed thesaurus; maybe both. Many passages in Solar seemed only to exist to give the author an excuse to show-off his vocab, and served no purpose to progress or enhance the storyline. Too often nine words are used when three would have been sufficient, similarly, often a long word is chosen when a short one would have done the job. There are way too many "creative" metaphors: All making many stretches of Solar ponderous. The writing style is simply pretentious, not art - simply bad writing.

The character of Michael Beard is strong and interesting if not the slightest bit likeable, but that's ok, because at least he is unique and complex. His lack of attractiveness and personality quirks make him colourful and he almost carries what is a fairly disappointing plot.
In the publicity for Solar there were several descriptions of it being a dark satirical novel. The two problems are firstly, it's not very funny or secondly, particularly dark. The satirical elements are few and far between, and the humour is clunky and incredibly predictable: as is much of the plot. You can see the next twist coming a mile-off; with the exception of the polar bear rug incident.
Solar is well research, almost educational on the sciences of physics and climate, and the author is clearly an intelligent guy, judging by the interview with his editor - who is maybe the one who should carry the blame for this novel being so poor. The story was hard to follow at times as it jumped around alot in time, and often it took me paragraph or two to work out where we were in the story.
The narrator did a very good job. His Oxbridge accent added to the pretentious feel of the writing, but he performed the various accents well, and was easy to listen to.

What was most disappointing about Ian McEwan’s story?

The amount of irrelevant detail and focus on sexually explicit aspects of the story that had nothing to do with the actual plot, was distracting, and ultimately off-putting. I could not even plow through it to the end.

The narration was clear, excellent and provided a quality listening experience.

If you could play editor, what scene or scenes would you have cut from Solar?

90% of the sexual references.

What a horrible man.

Would you listen to Solar again? Why?

Yes. I enjoyed the very descriptive details of the main characters thoughts.

What was one of the most memorable moments of Solar?

I did laugh out loud a number of times at how awful he was.

He spoke just the way I imagined a larger man who beleived he was superior to those around him would speak.

I laughed a lot in this book. He really was so awful a man.

Do men really think as this main character does?