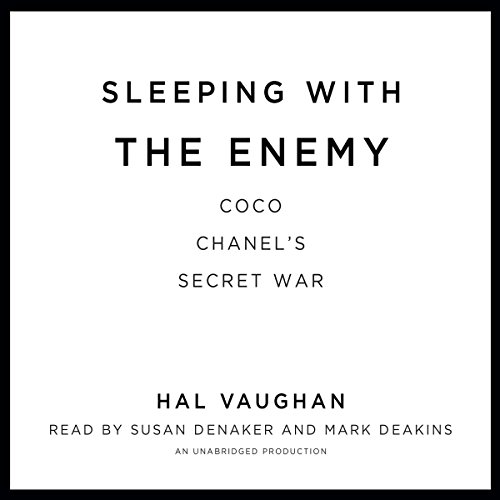 Sleeping with the Enemy

Sleeping with the Enemy

"From this century, in France, three names will remain: de Gaulle, Picasso, and Chanel."
—André Malraux

Coco Chanel created the look of the modern woman and was the high priestess of couture. She believed in simplicity and elegance, and freed women from the tyranny of fashion. She inspired women to take off their bone corsets and cut their hair. She used ordinary jersey as couture fabric, elevated the waistline, and created bell-bottom trousers, trench coats, and turtleneck sweaters. In the 1920s, when Chanel employed more than 2,000 people in her workrooms, she had amassed a personal fortune of $15 million and went on to create an empire.

But for more than half a century, Chanel’s life from 1941 to 1954 has been shrouded in vagueness and rumor, mystery and myth. Neither Chanel nor her many biographers have ever told the full story of those years. Now Hal Vaughan, in this explosive narrative—part suspense thriller, part wartime portrait—fully pieces together the hidden years of Gabrielle “Coco” Chanel’s life, from the Nazi occupation of Paris to the aftermath of World War II.

Vaughan reveals the truth of Chanel’s long-whispered collaboration with Hitler’s high-ranking officials in occupied Paris from 1940 to 1944. He writes in detail of her decades-long affair with Baron Hans Günther von Dincklage, “Spatz” (“sparrow” in English), described in most Chanel biographies as being an innocuous, English-speaking tennis player playboy and a harmless dupe—a loyal German soldier and diplomat serving his mother country and not a member of the Nazi party. In Vaughan’s absorbing, meticulously researched book, Dincklage is revealed to have been a Nazi master spy and German military intelligence agent who ran a spy ring in the Mediterranean and in Paris and reported directly to Nazi propaganda minister Joseph Goebbels, right hand to Hitler.

Would you try another book from Hal Vaughan and/or Susan Denaker and Mark Deakins ?

The story of Coco Chanel's flirtation with the Nazis should surely make a great read, but this is not it. The narrative jumps from one time to another in a confusing way. A better editor was needed. One egregious error was referring to the duke of Windsor as Prince Edward VIII - was that the error of writer or reader? A number of mispronunciations hit my ear; the word "ingenuous" was read as "ingenious" (I am assuming that WAS the word as the other made no sense). The reader has a pleasant voice but falls often when mentioning the names of German and French places and people. I did not find her professional enough in this respect.

If we all knew how things went...

Very interesting book with lots of details. When we see the famous people and their creations we never imagine what there was behind the curtains. Worth listening to the story. The good thing about the book is that it is not about fashion, but about the time in history with its players.

Narration was excellent. Thought the story was very dry. It was more an historical account and wasn't nearly as juicy as I had hoped!

What I never knew about COCO !

What made the experience of listening to Sleeping with the Enemy the most enjoyable?

I loved this book from the beginning to the end.. The convenience to be a able to double task and listen to this book was a new experience that I will do again and again.

What was one of the most memorable moments of Sleeping with the Enemy?

Finding out that Coco had many faces . She was a drug addict, cold calculating and charming, talented, elegant all in the same breathe.

Have you listened to any of Susan Denaker and Mark Deakins ’s other performances before? How does this one compare?

I would recommend this book as being very entertaining and well written.

Chanel was such a complex woman!

I have read a couple biographies on CoCo Chanel, and this one does not disappoint. She had a way of telling different versions about her past to many friends and biographers, so it is hard to establish the truth of Chanel's life, but this book is very well researched. The narrator is very good, using French, German, British and American accents when quoting people. The tempo is very good and an easy listen. There are a lot of names and dates to keep track of, and when listening in small spurts, found it difficult to keep track of all the players.

I would recommend this book if you have an interest in Chanel, the woman. The book touches on her relationships with friends, family, her many romances but also on her relationship with the perfume makers of Chanel No. 5 which I found very interesting.

I liked that this book was about Chanel. I wasn't pleased with how often the author repeated himself on previously stated facts, as if I had put the book down for a few months, picked it back up,and couldn't be bothered to skim back a few pages to refamiliarize myself with where I'd left off. Also, there is some jumping forwards and backwards in the timeline of the story that I found confusing in a few parts. Overall, I recommend this because it's informative but I only made it through to the last two hours of the book.

I really enjoyed this book. It gave an interesting back story in the life of Chanel, had a great narrator and kept me intrigued through all of the twists and details. Coco, I had NO idea!

Fascinating under the covers look at Coco Chanel

The things we didn't know about Chanel... her dark side. Well told and well read.

At times convoluted. History was presented non-linearly, and actors were not reintroduced to remind the reader who they were and why they were significant.

What really bothered me was the sympathy and admiration with which Chanel was portrayed. Takeaway message seemed to be: “She was a remarkable woman of great talent who became a Nazi collaborator because the men she loved happened to be Nazi sympathizers.” Utterly mundane and uninspired.

I wish there were more books like this one. I loved it. The story is incredible, and it interweaves a lot of big names and historical figures you may not associate with Coco Chanel (such as Churchill). I loved the complexity. The book is stark at times, but the author has a light touch and includes many fascinating details throughout. There is so much more to Chanel than most people realize (both good and bad). I loved that the book wasn't just a total fan-girl type vibe like some books on Chanel, but still revered her persistence and creativity as an entrepreneur and artist, while recognizing her involvement with the Nazi party (truly amazing this has been overlooked by so many!).