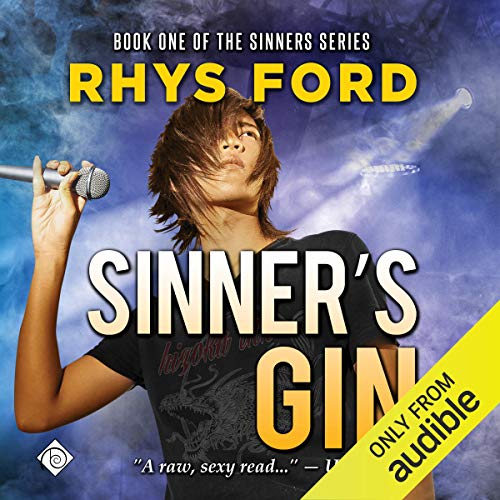 There's a dead man in Miki St. John's vintage Pontiac GTO, and he has no idea how it got there.

After Miki survives the tragic accident that killed his best friend and the other members of their band, Sinner's Gin, all he wants is to hide from the world in the refurbished warehouse he bought before their last tour. But when the man who sexually abused him as a boy is killed and his remains are dumped in Miki's car, Miki fears death isn't done with him yet.

Kane Morgan, the SFPD inspector renting space in the art co-op next door, initially suspects Miki had a hand in the man's murder, but Kane soon realizes Miki is as much a victim as the man splattered inside the GTO. As the murderer's body count rises, the attraction between Miki and Kane heats up. Neither man knows if they can make a relationship work, but despite Miki's emotional damage, Kane is determined to teach him how to love and be loved - provided, of course, Kane can catch the killer before Miki becomes the murderer's final victim.

I was so excited this came out in audio. I loved this book and loved the audio version. The narrator is very good, complete with an Irish brogue. He also brought emotion to the story, which was great. A great love story and murder mystery. I hope the sequel also comes out with the same narrator.

As the author of this book, I wanted to give a HUGE thank you to Tristan James' work in this narration. His voices for the individual characters was perfect and I thoroughly enjoyed his reading. I have heard nothing but positive reviews from my readers on his performance so thank you so much!

Where does Sinner's Gin rank among all the audiobooks you’ve listened to so far?

It ranks up there, I was about to stop buying M/M romance because I was tired of the same...This was not the same ole, same ole. It was a little Josh Lanyon, meets Cardeno C.

I loved the narrator, please, please, do not change the narrator midway through the series. I am hoping you will be consistent in this series. He did such a good job with the Irish accents, and transitioned between all the characters without sounding exaggerated. Even his female voices were believable.

Which character – as performed by Tristan James – was your favorite?

I did not have an extreme reaction, but I definitely had a surprised and pleasant reaction. It did make me laugh, though.

Must listen to the next in the series.

Even better than reading the story

I enjoyed reading Sinner's Gin when it was first released. This narrative by Tristan James is excellent because the he conveys the different characters' voices so well, especially of course the Irish accents of the entire Morgan family, from Kane and his brothers, to his father Donal. I heartily reccommend this audio book to others.

Even more important to me is, this well-delivered narrative brought Rhys Ford's prose alive and listening to it reveals more of the structure of the story. I have gotten too impatient when I find a well-written story, and I have to force myself to slow down and enjoy it. Narratives force one to not skip a word, and this one inspires me to go back and re-read the story.

Whyskey and Rye, which I did not enjoy reading quite as much as Sinner's Gin, will be my next audio purchase, just because it is done by the same narrator. And I count on the audio version to again reveal to my ears the suble aspects of the story landscape that my greedy eyes may have skipped in my first read.

Rhys Ford is a very talented story teller and writer, and I am glad to see this author choosing a narrator worthy of her efforts.

1st Ford book to listen to and not the last!

When Miki kicked the crap out of his stalker!

What does Tristan James bring to the story that you wouldn’t experience if you just read the book?

Great voices, even the Irish

Tristan James is a fabulous narrator!

Where does Sinner's Gin rank among all the audiobooks you’ve listened to so far?

Sinner's Gin is among my favorites right up there with Cut & Run. The story is fabulous and Tristan James is a much better narrator than 99% of what I have listened to.

Every time Miki and Kane are together.

Which character – as performed by Tristan James – was your favorite?

If I have to choose it would be Kane. I could listen to Tristan's voice in Kane's soft Irish brogue forever.

This story made me laugh AND cry but that's what helps make it a good book for me.

What made the experience of listening to Sinner's Gin the most enjoyable?

The Irish Accent and of course the story.

Every scene, I loved this book but not as much as the Cole McGinnis books. I can't wait to hear them in audio.

All of the book moved me.

Not as good as the "Dirty" (Cole McGinnis) series

I enjoyed the "Dirty" series very much and so I looked forward to this other series but after listening to this first one, I don't plan to listen to the rest. I found the "Dirty" books sexy, funny portrayals of great characters in realistic story lines. I found Sinner's Gin to be schmaltzy, predictable and one-dimensional. It's not that I hated it, it just wasn't as good, and so, by comparison, it sucked. Like the "Dirty" books, there is one character with an accent, one skinny Asian loverboy, one strong cop type and a sympathetic female. As with that series, the murder mystery in this one is secondary to the relationship building of the main characters.

Also, the biggest issue MAY have been the narrator. Since I found him awful, I was never sure whether the lack of sexual appeal and the overall baseness of the story was simply that he couldn't (for me) portray these characters adequately or give them any realistic life. The characters are 25-30ish and the narrator's voice sounded 50. The story has a cop with an Irish accent and one with a Latino one. The narrator does the accents well but he sometimes talked in one accent when it was the other character talking (and sometimes did no accent when it was a character who had one). He did not alter his voice to portray the emotions of a situation, with the exception of a few crying moments. The sex scenes? He read them as he read every other word, sentence, paragraph, not sexy at all!

If you have time and credits/money to spare, this book really isn't that bad, but if you are getting it just because you loved the author's other books (on audible) I suggest taking a sample listen before buying, or just passing this one up for something else.

I recently read a few wonderful short stories that Rhys Ford shared during her blog tour for Rebel. She introduced old and new friends and among them were Miki and Kane. These stories made me want to go back and re-read the Sinner's series, as I have such fond memories of the Morgan clan and the band.

I loved this book, a lot. I loved pretty much everything about it. My hart broke so many times for Miki, I had forgotten how gut-wrenching his past was. How utterly alone he was, his only company being a dag he didn’t even dare call his own. And yes, I skipped reading the blurb this time around, figured I remembered the basic s and premise of the book - I was wrong, and it was a bit of a punch in the gut. I hurt so much for him and everything he lost. For everything he never had, but should have had. What many of us takes for granted, and forget to appreciate; someone who truly cares about you. Someone that sees you and loves you unconditionally.

Kane Morgan rents the space next to Miki’s home, for his craft projects when he wants to get away from all the stress that being a police detective can bring. He is less than impressed by the snarly young man next door. He’s even less impressed when he finds a gruesome body in the trunk of Miki’s car. He is still, fascinated by this broken man and can’t stop thinking about him… and he’s not thinking about him as a suspect in his case. And all he wants is to wrap Miki in his arms and protect him from all the evils from his past that threatens to destroy him for good.

Another character that I really enjoyed was Dude. He's just what this grumpy recluse of a rock star needs. The thieving little terrier mix slowly coaxes Miki to care for another living being again. Very reluctantly I might add, but it works. He’s also the one to bring Kane into their lives. He rules them both with his subtle (and not so subtle) paw.

The Morgan clan is just great! They can be an insane and definitely loud and overbearing bunch, but they are wonderful, and just like a true family should be. Unconditional love all around. Solid. And just what Miki needs, but maybe in small doses to start, they can be a bit of a culture shock for someone like him.

Tristan James was a good choice of narrator for this book. I loved his voice for Kane, it was spot on. He knows his accents and portrays them well. Ok, so he slips up a little every now and then, but there are only a handful of narrators out there who never does, so I can forgive him that. I do wish that he performed the book a bit more at times instead of narrating, but then again I am very partial to that type of audio. Again it's something I can forgive and it definitely won't keep me from picking up more books narrated by him. In fact, I'm moving right on to Whiskey and Wry.

The book ends with a bit of a cliffhanger, or well not a cliffhanger per se, just a teaser of what's to come in the next book. One that will make you wish you can start reading book two right after finishing this one, so make sure you have it ready to go.

The start of something great

I cannot recommend the Sinners series by Rhys Ford enough. I love every aspect, from the characters to the settings to the cover art. Tristan James does an amazing jobbring it all to life in his narration. Do not hesitate to give this author, series and narrator a try.