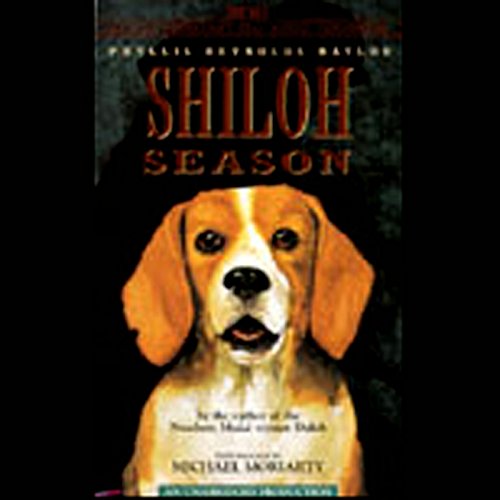 After Marty Preston worked so hard to earn the dog Shiloh, he had hoped that his troubles with Judd Travers were over. He could not rescue all the dogs that Judd mistreated, but since Shiloh was the one who ran away and came with him, Shiloh was the one he loved.

Judd, however, has other problems. Anyone who cheats, swears, lies, and kicks his dogs has troubles inside himself, and when the man starts drinking, Marty realizes that Shiloh is in danger once again.

As hunting season approaches and Judd begins hunting on their land, the Prestons know that something is bound to happen. They're right. Marty does the only thing he can think of to do and discovers just how deep a hurt can go and how long it takes to heal.

"Naylor offers a moving and powerful look at the best and the worst of human nature as well as the shades of gray that color most of life's dilemmas." (Booklist)

I love the book but

I really like it because the music helps the expression and makes the story real. I like that the end is unexpected. I like that it is a story about rescuing a beagle.

It was a very very good story. I will never forget it! It was the best shiloh book I ever read!😍

The book and the performance are great. My issue is that when the first book in a series is available in immersion reading format, the reader should be warned CLEARLY prior to purchasing additional books in the series when the book is NOT available in immersion reading format! There was no warning whatsoever that this Kindle/Audible version would not be available with the immersion capability; only after purchasing the book did I discover that for the second book in the series - also a best seller - the immersion reading capability is inexplicably gone, as is my $16, given combined costs of both the Kindle book and Audible recording.

This is an ongoing problem, and as much as I think well of Amazon and (especially) Audible customer service, this is an easy problem to rectify by clearly stating on the product pages that "this version is not yet Immersion Reading capable." For many of us, the entire point in purchasing these books is for the Immersion Reading capability - clearly state in obvious places when this is or is not the case, especially when the predecessors in a series have had the capability.

I want to go home

The setting of the story Shiloh takes me back through the years of my youth in the Ouachita mountains of Eastern Oklahoma where the jBorn Again culture has its own sub language.
thank you for taking me to the home where my heart belongs.

Love the story but this reader was horrible

I love the whole Shiloh series of books but this reader has no inflection or cadence in how he reads this excellent book. Performance was horrible

The narrator talks too fast and is incomprehensible.
Speak slooowly and cleeearly please!
Am I listening to a conversation at a rodeo or a book?
After a few horrible narrators I'm thinking of ditching InAudible!

I love this book it is the best book I've ever read. I sold love to see a 4th book for Shiloh

A happy dog who loves to follow it's owner

Would you consider the audio edition of Shiloh Season to be better than the print version?

yes I prefer listening to the book rather than reading it and taking days to finish it.

What other book might you compare Shiloh Season to and why?

Shiloh because it's the first book

A Great listen. read and good time for all!

What made the experience of listening to Shiloh Season the most enjoyable?

No matter what age you are these three books about Shiloh, by Phylllis Reynolds Naylor , are not only alot of fun to read for yourself, but even better to listen to. Having them read by Michael Moriarty is also a great listen. I beleive all people of any age will liten and enjoy all the twist and turns of this book about a dog and his master.

Marty becouse he never gives up.

Which character – as performed by Michael Moriarty – was your favorite?

Yes and it goes very fast. You can get very wraped up in the story even if you have heard it many times before.

A very enjoyable book to listen to for a light harted change of pace especially if you love family stories with kids and animal and adventure.