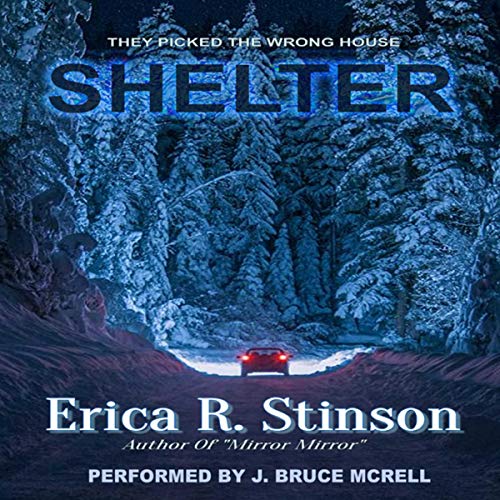 When Gabriel Warner loses his job, he and his deaf 10-year-old, Anne, hit rock-bottom. So when a new opportunity presents itself, Gabriel jumps at the chance, even though it means heading into the biggest blizzard to hit upstate New York in 20 years.

But hope turns to peril when they're derailed by a car accident.

Desperate for shelter, they find refuge in an empty house deep in the woods.

Jake Pryor has been a broken man since the senseless loss of his family during a home invasion.

Hell-bent on protecting his new wife and children, he's constructed an impenetrable fortress to keep them safe. However, while he and his family are out of town, he's alerted about a break-in.

Able to remotely operate the security system, Jake activates the VaultMode feature, ensnaring the intruders until he can arrive with the authorities.

Gabriel and Anne are now trapped without electricity, communication, food, or water.

They managed to escape the storm, but will they escape their shelter?

As a parent, this was a challenge to begin reading, but the book was worth the read. Some of my worst nightmares, but the story of the characters and how their lives pushed together and worked together worked well. The author does a great job with the descriptions of the sense and building the characters without wasting time. The novel was to the point and the action never slows down.

A great story about courage, love & truth. Gabe had a rough time. The loss of his job & all
the bills. We all know how that is. Then to have a horrific accident in the middle of nowhere. The house that they took refuge in was another scare. Bravo for Ann being so brave. Great story.

Down and out man falls victim to one unfortunate event after the other. I liked the narrator's performance. The story was interesting and definitely holds your attention.

But, things take a turn toward the improbable and then wrap neatly up in a bow at the end. The author pushed my ability to "believe" and "identify" with the story way too far.

4 star book that I wouldn't recommend to a friend. I think that says it all. It is good, but not for me.

OMG! What a intense Thiller Suspense!!

This story is 2 stories really coming together in one final story. There are actually 3 main characters in these come together stories. I can not imagine going through any of there horrible situations that lead up to these things happening. I do not want to put in Spoilers so can not say much other then a FANTASTIC listen/read and highly recommend this book. Narrator did a very good job on this book, since I listened to it on Audible.

A book that takes you into the depravity of people then also lifts you to the goodness in people. I listened every chance I got. It felt like the time flew by; it was a excellent listen. with the details you could imagine each aspect of the story. Definitely a must!

For the most part, I really enjoyed listening to this book. I found the first 75% to be really very good. The writing style was nice and it seemed like it was leading up to a really good last quarter of the book. But I actually found the ending to be a little lackluster. I don't know, maybe it was just me. My only other problem with this novel was the narration. I'm really not usually very critical of narrators but wow. This guy kind of seemed like her was yelling at me the whole time. I really wanted to like this book more than I did. I mean it wasn't awful, but it wasn't great.

This book was given to me at my request (Thanx StoryOrigin). I am providing a voluntary and honest review. <3

I really enjoyed this book. I recommend this book for mature readers. There's a rape scene towards the beginning of the book but it helps tie the story together. I would love to read other books from this author. I received this book for free from the author for a honest review.

This has been a great Audible listen! Well told by both the author and the narrator. The narrator was very easy to listen to. He had just the right amount of inflection in his storytelling to make this book intense. In fact, I was tempted to quit listening because it was all so believable and real. I hated what was happening to these men and their families. I'm so glad I stayed around for their HEAs in the end. I liked the way this author describes and/or explains all the little details without somehow being tedious. I felt what it is like to be deaf, to be poor, to be hungry, to be desperate. So scary, frustrating, helpless. Well done.
I voluntarily reviewed a complimentary copy of this book.

Not really a suspense thriller but enjoyable

I don't think this book was a gripping suspense thriller. There was some suspense but I wouldn't classify it as a thriller. It was basically a book about when bad things happen to good people and how they react. It starts with a robbery and murder of Jake's family. Then we meet Gabe and his deaf daughter Anna as Gabe has just lost his job. How these two families meet and what the outcome is is the subject of the remainder of the book. I don't want to spoil the story but I thoroughly enjoyed it. I received a free copy of the audiobook from Story Origin. The narrator did a great job and was very easy to understand. I look forward to reading more of Ms Stinson's work.