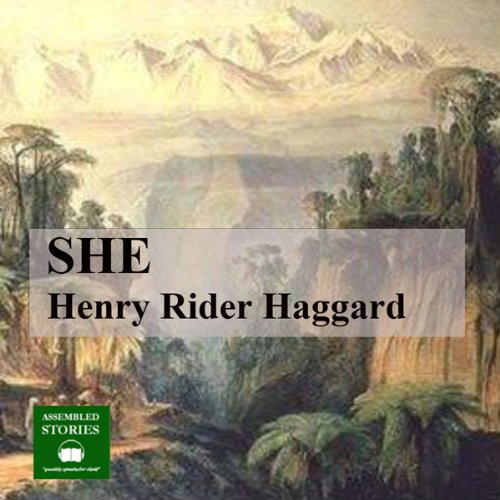 Ludwig Horace Holly, a Cambridge professor, travels to Africa with his adopted son Leo to investigate the death of Kallicrates, Leo’s ancestor, who was murdered by an unknown woman centuries before.

They encounter the Amahagger, a fierce tribe of cannibals who live in the caves of Kôr, a huge burial ground of an ancient civilisation decimated by plague.

The tribe are ruled over by She-who-must-be-obeyed [Ayesha], a mysterious and ruthless Queen who has the secret of eternal life while still possessing the beauty and radiance of a young woman. She has lived, virtually alone, for 2,000 years awaiting the return of her lover Kallicrates, whom she killed in a fit of jealous rage. When Ayesha sees Leo she believes him to be the reincarnation of the man who spurned her. A bewitching temptress, naively flirtatious but capable of horrific acts of malevolence, she will not be thwarted a second time. They will both bathe in the Eternal Flame before their marriage!

Not without sudden flashes of humour She is an intriguing story set in the ‘Dark Continent’ with a mix of sex and the supernatural which thrilled the Victorians and still - one hundred years later - continues to enthral.

"Peter Joyce is the most remarkable one-man band in audiobook publishing. Joyce, an experienced actor, reads them all himself." ( The Independent)

About Assembled Stories: Over the years the national press have reviewed Assembled Stories titles as "excellent", "remarkable", "entrancing", "superb", "magic for sure", "masterly", "wonderful", "a class act" and "a splendid example of audio at its best".

Great book but the narration.

I already have the physical book and read over hundred times yet wanted to try the audible version; the narration was not that good and time to time the person was being overly dramatic...

What would have made She better?

Over the top depiction / dialogue with She. It seemed to never end. Very monotonous. It really doesn't matter how it could be better, it was written a long time ago and the style is really not appealing to me.

What could Henry Rider Haggard have done to make this a more enjoyable book for you?

Shortened it. Removed at least half of the dialogue.

What does Peter Joyce bring to the story that you wouldn’t experience if you just read the book?

He does do a great job providing some sort of anticipation and emotion to this story. His soupy interpretation of the nice She, gets very tiresome.

If you could play editor, what scene or scenes would you have cut from She?

I would shorten all of the dialogue between She and the main character. Too much philosophy.

I read this because I am reading the top 100 best sellers. I can only guess that this book made it to the list because countless universities have had it on their required reading list for decades. I don't think this one would get the popular vote. If you like weird, dated, philosophical, mish mash, this is the book for you. The entertainment factor is absent.

I was looking for a great adventure novel and deafly found what I was looking for in this book. Full of mistory, exploration and fantasy this book kept me listening for hours on end till I was done. The writing is intriguing and the narrator does a great job of expressing the emotions of the characters. I hope you enjoy this book as much as I did.