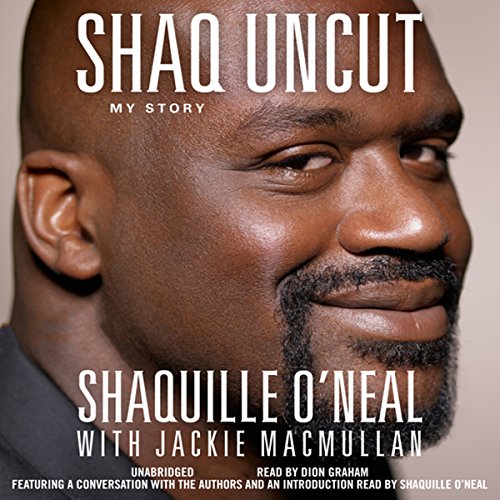 You know him by any number of names, and chances are you know all about his legendary basketball career: Shaquille "Shaq" O'Neal is a four-time NBA champion and a three-time NBA Finals MVP. After being an All-American at Louisiana State University, he was the overall number-one draft pick in the NBA in 1992. In his 19-year career, Shaq racked up 28,596 career points (including 5,935 free throws!); 13,099 rebounds; 3,026 assists; 2,732 blocks; and 15 All-Star appearances.

These are statistics that are almost as massive as the man himself. His presence - both physically and psychologically - made him a dominant force in the game for two decades.

But if you follow the game, you also know that there's a lot more to Shaquille O'Neal than just basketball. Shaq is famous for his playful, and at times provocative, personality. He is, literally, outsize in both scale and persona. Whether rapping on any of his five albums, challenging celebrities on his hit television show Shaq Vs., studying for his Ph.D. or serving as a reserve police officer, there's no question that Shaq has led a unique and multi-dimensional life. And in this rollicking new autobiography, Shaq discusses his remarkable journey, including his candid thoughts on teammates and coaches, including Kobe Bryant, Dwyane Wade, LeBron James, Phil Jackson, and Pat Riley.

From growing up in difficult circumstances and getting cut from his high-school basketball team to his larger-than-life basketball career, Shaq lays it all out in Shaq Uncut: My Story.

When I bought this for my boyfriend (a massive basketball fan) to listen to on a long haul flight I had no intention of listening to it too. As it turned out we had to share the headphones to listen!
The author has done a great job of telling Shaq's story and (according to the big man himself) dug up memories that he had forgotten himself.
Loved it. Highly recommended.

Laughed out loud more than a few times.

ENJOYED IT FROM BEGINNING TO END

This book was outstanding. They could not have picked a better person to do the voice read. He made it feel the way it did. A little cussing in it which is not my preference but I do understand that. It wasn't overwhelming. Very insightful, full of "behind the scenes" information. I really enjoyed it.The book showed that more than sports skill-Shaq is also an educated business man-an important lesson. Great book for young people (although be ware of a few cuss words). Even if your not a Shaquille O'Neal fan you will enjoy this book alot.

The Truth about Shaq.

Shaq. Anytime there's a story about athletes and money its either a outrageous contract or bankruptcy. Shap is generous and a business man. He comes across warm, insecure and honest. His honestly shines through over and over allowing readers/listeners to know him on a different level and care about his story.

Shaq is bigger than basketball and lives like it. He has unwritten rules that define him: loyalty, honesty, and charity.

Whenever he talk about helping out children. Shaqaclause or bringing snow to LA.

Shaq's love for his family. Though Shaq refuses to admit it, he was what many would consider to abused by his step-father. Shaq loves his step-father anyway and sees through the abuse to what Phillip Morris is trying to teach Shaq. Phillip Morris had wonderful lessons for Shaq to learn but an abusive way to teach lessons. I have profound respect for Shaq because he understood that and learned through the abusive relationship.

If you if Shaq then you will like this read. Excellent reader for this book too!

Most comical biography ever

Hilarious, reader sounds like Shaq, even when he's being sarcastic. He brags, he criticizes himself, and very professionally talks about his relationships with teammates. Very honest, Fantastic book.

Would you listen to Shaq Uncut again? Why?

No. Only because I don't go back to books once I've read them.

Shaq discussing his relationships with his parents, Kobe, organizations and friends.
His admiration and respect for some players and his humor.

With Laker players, trying to keep Shaq from going after Kobe, when they intercepted Shaq at the team theatre and talked them through it.

Would you listen to Shaq Uncut again? Why?

Yes, but I only listen to a book only once

What made the experience of listening to Shaq Uncut the most enjoyable?

I have to admit that I was pleasantly suprised at how well I enjoyed this. The narrator was very good and at first you think that Shaq is really telling this. You do get the feeling that Shaq loves himself and that no one will ever be like him....But that's Shaq. A GOOD LISTEN.

Mother and Grandmother... They always kept him on point.

Which character – as performed by Dion Graham – was your favorite?

Makes me want my sons to be just like him..

I love getting to know Shaquille more. Not just Shaq the basketball player.

I would have to say when his grandmother passed away and how he took it. Also the relationship he had with his stepfather.

Which character – as performed by Dion Graham – was your favorite?

What he did for the homeless and how charitable Shaq was and still is.

I loved to learn how much of a great business man Shaq is.

Shaq Tells the whole story about him and Kobe

What made the experience of listening to Shaq Uncut the most enjoyable?

Shaq gave the real inside story of life in the NBA, it was very funny, witty, and he pulled no punches. Any sports fan is going to love how he aspired to be a superstar athlete, rapper and entertainer. I couldn't put it down .

The real inside story of what happened to sour the relationship between him and Kobe.

This is my first time, but i thoroughly enjoyed it.

I laughed thru most of it and his relationship with his foster father was very sentimental. His real father didn't care to be a part of his life until after he had made it big.