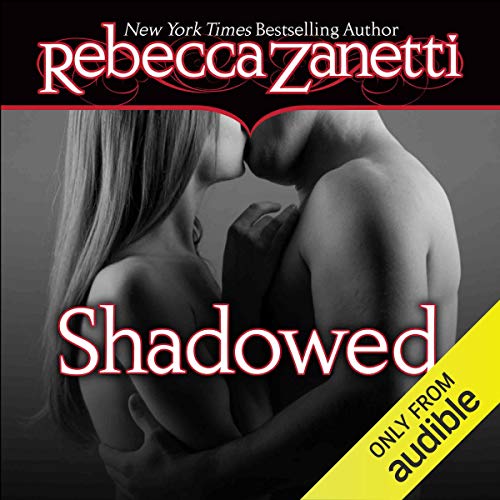 Danger signs rise off Jase Kayrs like steam - the scars, the secrets, the strength. He's got a mission, and he's not interested in much outside of it. Except Brenna Dunne.

Brenna was an ass-kicking, name-taking witch - before the poison that's killing her sapped her powers too. She knows there's more to Jase than a handsome face and an ugly history. But there's no time to find out what. Taking him as her mate might save her life. But once she unleashes the force of his desire, there will be no turning back....

Oh I Loved These Two!!

AudioBook Review:
Stars: Overall 5 Narration 5 Story 5
Time to find out all about Jase: captured and tortured during the Realm War, he’s only been dropping in with small moments that show his ordeal, his struggles in maintaining his sanity and defiance. His capture is not forgotten by his brothers, and they are getting increasingly frustrated and worried for his sanity, wondering just how much the time in captivity will have changed him.

Returned, he is changed: darker, violent and convinced that the demons that held him captive have left him with a time bomb, one that will cause him to destroy his family and win them the world. His anger and thirst for vengeance are coloring his every move, and he’s particularly invested in revenge against the demons, particularly Willa, Malco and Suri.

Brenna Dunne, sister of Moira, wife of Connlan has a problem: years ago when she joined in the battle, she was poisoned, has lost her powers and is becoming weaker as time goes on, despite every attempt to find a cure. Dage believes that Brenna and Jase are perfectly matched, and pushes the two together.

Oh I loved these two, Brenna is much like Moira, only she’s got a wicked sense of humor and a long held crush on Jase. With a great emotional push-pull between what Jase wants, and his worry that he will somehow taint the light and goodness that is Brenna with his anger and vengeful feelings, it is she who has to step up and make miracles… and does she ever! With all of the mates taking a moment in the spotlight, including Garret (Talyn & Cara’s son) as well as another check in with Janie in her long-standing story. Decisions for Janie are coming soon, and those have me anxious to discover, even as I am regretting this series coming to an end.

Narration for this series is more than capably handled by Karen White. She’s taken this series from beginning to end, each character has a unique voice and delivery which instantly brings the character to mind. With the story taking place over several years, characters have grown and aged, and White deftly navigates the maturation without losing touch with the earliest introductions. Honestly, her work in this series is unforgettable, and perfectly suited to the story. She embodies the tension, the weariness with the long-term war and even the joy that every character tries to find in much needed moments away from the worries. Emotions are rapid fire in this series, and moments of tension ebb and flow, while White deftly handles these changes in intensity, pacing the delivery in a way that brings the emotion to the listener.

I received an AudioBook copy of the title from Audible Communications Team for purpose of honest review. I was not compensated for this review: all conclusions are my own responsibility.

I loved how human Chase was.... He had real issues after a terrible experience. All the brothers have mates now.... So Janine is next....

this book is notes my favorite of all t the Dark Protestor series books. i intend listen to this book again.

let's talk about how truly terrible this was.

the narrator completely ruin the story The heroine sounded like a 90 year old woman the guys sounds like munchkins it was absolutely a train wreck this might have been a good book but I just could not get past that sad state of affairs of this narration do yourself with their favour don't buy this, it's worthless!!!

It always surprises me how the author continues to develop these stories and creates another great story. It’s packed with a little mystery romance, steam and action.
Story 5/5
Steam 5/5
Narration 5/5
Overall 5/5

Karen White performs this story with amazing versatility, giving each character his or her own distinctive voice. What an actress! This story was sexy, exciting and emotional. Loved this performance.

Definately worth your time! It's thrilling, suspenseful, romantic, with quite a bit of humor; wrapped up in an awesome package!

Great read. It was nice to see yet another main yet flawed character find salvation and love. Yet another sexy hot read with substance.

My favorite couple in the series yet.

I was really excited to finally get to Jase’s book. As the youngest of Kayrs brothers, he was always the funnest brother. That is until he was kidnapped and tortured by demons for five years. Not only did the demons physically torture him, but they also did some pretty bad mental torture on him. We saw some of this torture in the previous book. Once he got out, he was not whole and he was no longer the fun-loving brother that he was before capture. He had only one thing on his mind, revenge.

Brenna Dunne isn’t supposed to exist according to several people. As the eight sister to a seventh sister, she is an abomination. No witch has ever had an eighth daughter before. They are supposed to stop at seven. There is also a prophecy about her, the solstice and a comet. People believe she is going to blow up the universe. Needless to say that has a target on her head. In an earlier book, she was poisoned and it has been killing her slowing ever since. In a desperate move to save her life, they decide that she needs to mate with a vampire to help heal the poison out her system. Jase agrees to this arranged mating because he wants her powers to go after the demons.

This is my favorite romance of the series so far. Both of these two are broken, in different ways, but broken none the less. They both agree to this arrange mating for different reasons. Both of them come together to be what the other needs to save themselves and to save each other. It is things that they are forced to do as a couple that will save them. Their love for each other that will help make them whole.

There is also a ton of stuff that happens with the war. Garrett, Janie’s young brother, is kidnapped by the Kurjans. Janie is forced to make tough decisions which really puts her at odds with her family that wants to protect her, but she knows that she must join this war if she is going to end it. Janie’s book is the next one and final book in the series. I’m excited to see how it will all wrap up.

Narration
Once again, Karen White does an amazing job. Brenna has this great Irish brogue. I don’t like it as much as Moira’s, who also has a large part in this book, but Brenna’s voice was wonderful. She also did a great job with gravelly demon voices, which I’m sure were tough to do. She continues to do a great job with men and female voices. I did listen at an increased speed, but that is normal for me.

**I like to thank the publisher for providing me with a copy of this audiobook in exchange for an honest review.

I truly love each and every one of these stories

I truly love each and every one of these stories. these are the very best