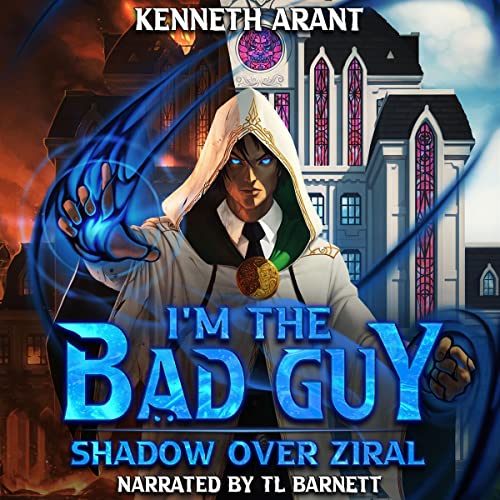 Why, oh why couldn’t he have plot armor?

After waking up as a "bad guy" inside his favorite anime, stopping a royal kidnapping, and headbutting one of his character's bullies, Aren was finally ready to begin his academy arc...but then the plot screwed him over.

Something is stirring in the mountains, and it’s driving the native monsters wild, forcing them to migrate toward the academy. And not even the academy, with all its enchantments and defensive barriers, could survive unscathed if they decided to attack.

To make matters worse, the students of the academy are acting strange. They're treating Aren like he's the villain he was written to be, and he can't imagine why. Only Kami has remained by his side through it all. If they somehow manage to survive the horde of monsters heading their way, Aren and his fellow students will soon be forced onto an entirely different battlefield.

But, hey, at least Aren is the only one who knows the truth of a far-off future and can act to prevent the worst from coming to pass...right?

From Kenneth Arant, best-selling author of All-Knowing Novice (Clanless Cultivator) and A Snake's Life, comes a new adventure that takes every anime trope and flips them on their head!

to short needs to be combined with the first one.

Book 1 & 2 need to be combined they are both to short.

if book one and two where one book this would be worth keeping but has it is you can just listen to this one and not need the first. I do got to give the author his props for writing a book that doesn't make me want to roll my eyes he is one of the few that writes for everyone interested in this kind of story and not just "the right kind of people".

I accidentally got this terrible book. So is life, but this guy’s voice is so bad. Terrible, why did you pick this guy? I do not want this book at all but audible will not let me return it.

Good but some issues.

It’s an excellent story, though the recording leaves a bit to desire. Unfortunately, there are several points in the recording. It sometimes loop back on itself then sometimes it is very difficult to understand and it sounds like it’s being recorded under the water or in a tank. The story also feels different than it did in the first book. I’m not sure of any better way to put it. It almost feels like a different person wrote the next book or maybe they just had a lot more experience.

the story was great, much longer than volume one. I do have an issue with the audio. It sounds like the narrator did something with the female voices half way through the book. like he used a synthesizer to try and make his voice sound more feminine, which was a total fail.

This book had me engaged from beginning to end. It does have some of your standard isekai themes but Arant has definitely at least in my experience added a few interesting scenarios that I have yet to see anyone else o in an isekai setting do. The book is an awesome read/listen and I look forward to booking #3.

Notes/constructive feedback:
There are at least 2x instances where the editor had the same line repeat right back to back
Additionally, the narrator was not consistent with the character's voices, and would I would say 85% of the time it was fine but there was a few time that it took me a few seconds to figure out who the narrator was speaking as.

Loved this book as much as the 1st one and can't wait to see what happens next!

I enjoyed the story. The thing I did not like is that he left his enemy alive at the end. That will inevitably come back to bite him in the rear. It is one of those stupid always done in story plot lines leading to something disastrous happening to the character in the future.

Audio is bad. Story is okay.

there is some forced drama, abandoned plot lines, and forced hate towards our protagonist. the story is okay, if the author had more practice and took more notes then this could have been a good story. i enjoyed the interactions with kami, and the lack of awareness of his talent. is enjoyable. other than that its kida shit.

Much better then the first book

But with the run times, they should have been bundled into 1 book/purchase. They together make a full part one of the story.

It’s longer than the first witch is a big plus as that was the only thing wrong with the first one. It’s not Amazing, but a really good series. Solid on all fronts and excels in most. The story is good! The narrator does good for most of it but the princesses voice. That is a little weird.