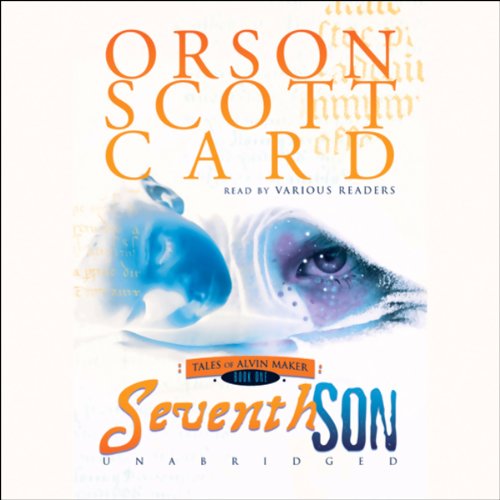 From the author of the award-winning Ender's Game comes the unforgettable story of young Alvin Maker, the seventh son of a seventh son.

Born into an alternative frontier America, where life is hard and folk magic is real, Alvin is gifted with power, but he must learn to use his gift wisely. Dark forces are arrayed against Alvin, and only a young girl with second sight can protect him.

"A tribute to the art of storytelling, this is highly recommended." ( Library Journal)
" Seventh Son begins what may be a significant recasting in fantasy terms of the tall tale of America." ( Washington Post Book World)
"A consistently gripping tale featuring solid historical research and a keen understanding of religious experience. Another major effort by a world-class talent. Highly recommended." ( Booklist)

Seventh Son has always been one of my favorite books. I waited for a very long time for an unabridged audio version. I was a little worried that it wouldn't live up to my high expectations, but the cast more than delivered. All the readers are so very talented. My only complaint is that Rev. Thrower sometimes lapses in and out of his Scottish accent, but it happens at appropriate enough times.

Seventh Son is creative storytelling at its very best. As an "alternate history" of America, you can't beat this book for color and charm. The characters are thoroughly believable and sympathetic.

Frontiersy magic-stories might be a departure for Card fans who are used to his sci-fi works, but give Seventh Son and its sequels a try anyhow. Card comes through with his usual brilliant characterization, real dialogue, and perfectly paced plot.

Atleast They Were English Scum

BEN FRANKLIN; AMERICA'S MOST POWERFUL WIZARD
This is an Alternate History American Fantasy. This alone is makes for a great story. This is an America divided up between England, Spain, Dutch, French and North American Indians. The map alone is cool. There are Duchies, States and Territories. There is a New Sweden, Camelot, New Orange, Suskwaheny, Noisy River Terr. and Irrakwa State. Canada is French.

SHE SHOULD HAVE LEARNT THE WORD NO, BEFORE SHE HAD 14 MOUTHS TO FEED.
This is about a very large family, struggling to survive in a harsh world. A world where people have knacks and certain gifts. They survive by using charms, beseechings, hexes and potions. Often these are used against them. It is a struggle between good and evil. This is different from Card's Sci-Fi, but it is still written with his talent and is a great entry into Fantasy if you have never tried it.

A MAN ALWAYS ASSUMES THAT OTHERS ARE AS VIRTUOUS AS HIMSELF.

I read this over 30 years ago and wondered if it would stand up to my memory of it. It was just as good if not better. This is one book you could read over and over and get more out of it each time.

NOT + NOT= NOT
My one irk with the whole thing was the narrators. There are several narrators including Orson Scott Card. One of the narrators is one of my favorites and there is one I hate. I usually like Card's voice, but believe he should have left this to the professionals. All the narrators do all the voices instead of doing certain characters. Sometimes a character has a certain accent, and then sometimes he does not. This is a small complaint, the writing makes up for any narrator problems and those are few.

I can't help but be overwhelmingly dissappointed by this book. After having read nearly 20 various OSC books from his early works, Treason, to his popular works, Ender Series, to his new material, Pathfinder, I have yet to find a book by him that I didn't enjoy. With that being said though, Seventh Son was an uneventful story that never captivated my heart whereas these aforementioned novels all did. The main problem with Seventh Son lies in the fact that there is little to no character development at all. Not only did I not grow to understand or genuinely like the characters, but I also felt the plot was drawn out and very little actually happened throughout the entire book. I wish I had enough room to fully explain my complaints with Seventh Son, but unfortunately I don't. The only saving grace for this audiobook lies within the excellent narration from Brick and Rudnicki. I can't say I'll be returning to this series though.

The beginning of the book was intriguing... however I got bored with all of the ridiculous conversation between alvin and Tale swapper. tried as hard as I could to stay interested in this book but finally stopped listening entirely. wish I could get a refund.

A Book in Which Magic is not Very Magical

The country, down-home, salt-of-the earth vibe of this book got too dull for me to plow through the end. I got about 3/4 of the way through before realizing nothing could possibly happen to these characters that I would care about, and I set it aside. I guess this story takes place in an alternate history, but I did not see why that was necessary. Writing about magic of fire, water, air and earth is just plain lazy, and made it sound like the plot of a video game. Making Christians into stuffy, narrow-minded enemies of magic is not new either. There is a person in this story called "tale-swapper" and guess what -- he swaps stories with people. Yawn. I guess this book is in the fantasy category, but it isn't very fantastical. Skip it.

Orson Scott Card's Seventh Son is the initial offering in a longer series. The title derives from the main character Alvin, who is the seventh son of a seventh son which imbues him with special magical abilities, usually referred to as 'knacks'. The story takes place in the early days of America when Ohio is still frontier. There's a tension between traditional Christianity and the practitioners of magic. At the same time an unseen, ill-defined entity known as the 'unmaker' is intent on destroying Alvin with the common theme of water being involved. Alvin has a hard time adjusting as well as avoiding the frequent death traps. US history is subtly altered and posits that Benjamin Franklin was a powerful magician earning the title of a maker. In this universe, magic is something that dies out from disuse.

In Card's universe, magic must be learned and practiced, but each person tends to specialize in different skills. While the identity of the unmaker is never revealed, the entity seems the embodiment of pure evil. There's also a focus on the conflict between traditional religion and magic the unmaker being able to take advantage of this conflict. The ending sets up the next two installments.

The narration is an ensemble cast which aids in presenting the multiple perspectives of the narrative. Pacing is easy going.

What disappointed you about Seventh Son?

The book moves so very slowly. I gave it ample time to pick up, but this was one seriously boring book. I gave up.

Would you be willing to try another one of the narrators’s performances?

"When you’re surrounded by light, how do you know whether it’s the glory of God, or the flames of Hell?"

Set in an alternate American frontier, Seventh Son is the first in Orson Scott Card’s THE TALES OF ALVIN MAKER. Alvin Miller is the seventh son of a seventh son which makes him special and potentially a very powerful healer, or “maker” — at least that’s what many who practice folk magic, believe. They know that many folk have “knacks” and they’ve seen the effects of curses and charms. It’s obvious that there’s a supernatural war going on around Alvin Miller. He’s almost been killed many times (usually by water), but it’s clear that some other force is protecting him. While his family expects greatness from Alvin, some of his neighbors think he may be “devil spawn.”
Reverend Thrower, the new Christian pastor who has just come over from Europe, finds all this folk magic to be rather creepy. He’s trying to dispel these superstitious notions while teaching his parish that any magic they think they see can be explained by scientific investigation. After interacting with Alvin’s family, he may be forced to reconsider his position. Is this folk magic superstitious nonsense, evil witchery, or a gift from God?

Seventh Son begins with an emotionally gripping scene as one child dies and another is born to the Miller family. These first few scenes make up the Hugo and Nebula nominated novella Hatrack River. The emotion doesn’t let up, the world-building and characterization are admirably complex, and there’s a nice touch of folksy humor — especially in the episodes of sibling rivalry.

I’ve heard it said that Seventh Son is loosely based on the life of Latter Day Saints prophet Joseph Smith, though I don’t know enough about Smith to notice the parallels. Orson Scott Card is known to be religious and conservative (and a member of the LDS church), but you wouldn’t know it from reading Seventh Son. Though religion is the dominant theme, Card’s religious characters are, at least on the surface, hard to sympathize with. For example, though Reverend Thrower’s intentions are good, his deeds are more evil than the deeds of the “immoral” people he opposes. It’s easy to see this from our perspective, but we can also see why Thrower thinks he’s doing the right thing. It’s a good parallel to some of the religious conflicts we see in our society today.

I’m intrigued by Card’s alternate America where familiar politics and personalities are slightly different from historical facts. This played an insignificant background role in Seventh Son, but will surely become more prominent in future volumes of THE TALES OF ALVIN MAKER. I look forward to that.

I listened to Blackstone Audio’s version of Seventh Son which was narrated by a full cast including Scott Brick, Gabrielle de Cuir, Stephen Hoye and Stefan Rudnicki. This is a superb cast who did a great job individually. The parts were split up by chapter rather than by role, so on a couple of occasions I was initially confused at the different accents used for the same character by different narrators. Included in the audiobook version is an afterword by Orson Scott Card which explains the origin of Hatrack River and Seventh Son.

Published in 1987, Seventh Son was nominated for the Hugo and World Fantasy Awards and won a Locus Award. It’s a beautifully written emotional story set in an original fantasy world.

This is a really unique book and series. It takes place in the frontier age of the United States and offer a vastly different timeline where most everyone has a magic ability or knack. This leads to some major divergences from our own history. i don't do spoilers so you will have to read to find out. Even though this was written long ago it holds up quite well. It has three different narrarators and they do a good job. This is not your usualy fantasy fare but I found it definitely worth a listen.

Great start to an amazing series. I read the books years ago when I heard about the movie remake I figured I had to read the book again.